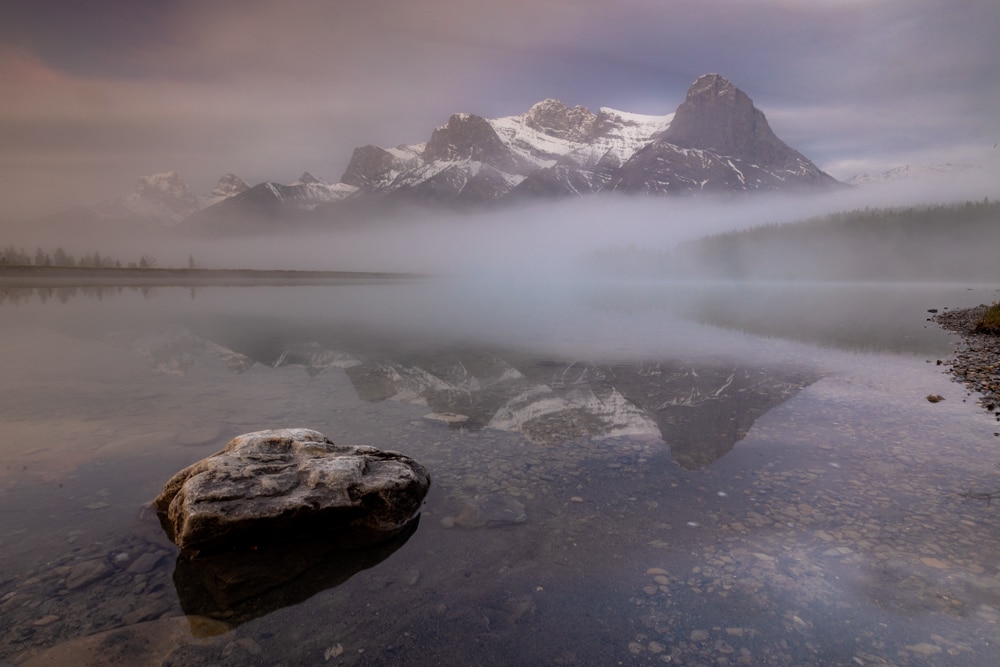 3 Weeks of Photography and Family in Canada

It should go without saying that I love Canada.

I mean, this is the place that brought me into the world, that raised me, and that guided me onto the path I’m currently on.  It’s where my family and oldest friends live.  It’s familiar, and even after all the years, it’s inspiring.

But, Canada isn’t home anymore. And though I know all the photo locations, it feels like I’m returning to a place I’ve visited in the past rather than my home turf.  I mean, I’ve been gone for 10 years now.  In fact, I’ve been away from Canada for more of my adult life than I’ve been around.

With that being said, I do know the classic photography locations. I’ve photographed places like Moraine Lake, Lake Louise, and Johnston Canyon dozens of times.  So, this time I got back to Canada, I wanted to make an effort to photograph new locations for me.

This is what went down during 3 weeks of photography and family in Canada. 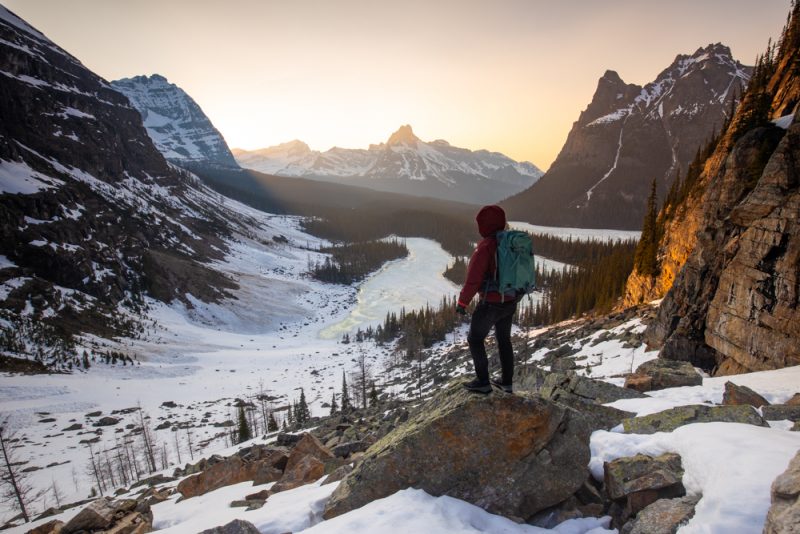 I’ve been to Waterton Lakes National Park a half dozen times.  But, I haven’t been back since a fire burned through the park a couple years ago.  I wanted to see how things had changed.

Also, it was Jodie’s first time. So I wanted to show her around.  And, more importantly, I wanted to find her a bear.  2 years ago when we were here in Canada the fires were in full force. As a result, I think it scared most of the bears away.  So, up until this year, Jodie didn’t get to see one in the wild. 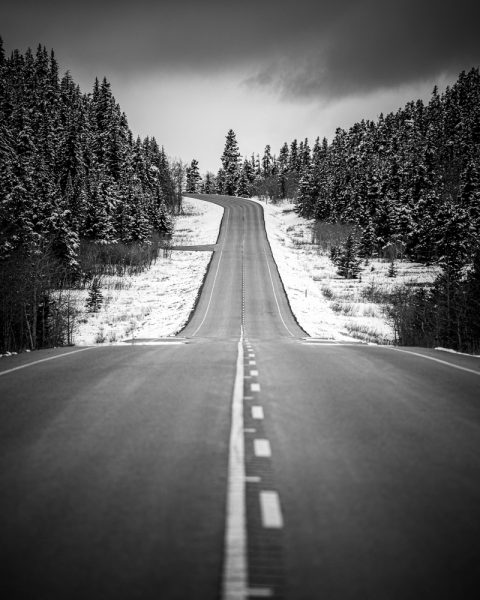 Unfortunately, most of the roads in Waterton are still closed because of the construction that’s necessary after the first.  So, on the first day, we took a drive on the only road available – the one that leads to Glacier National Park and the US border.

The following morning, I decided to peel myself out of bed and photograph the lake.  The weather had been rough for a couple days, so I was shocked to find some calm air, and beautiful light. 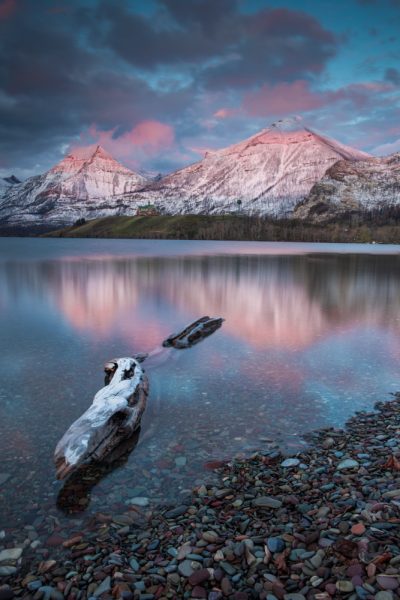 I think it was actually the calmest I’ve ever experienced in Waterton. Usually it’s so windy here that you can barely stand up a tripod, let alone grab beautiful reflections like this. 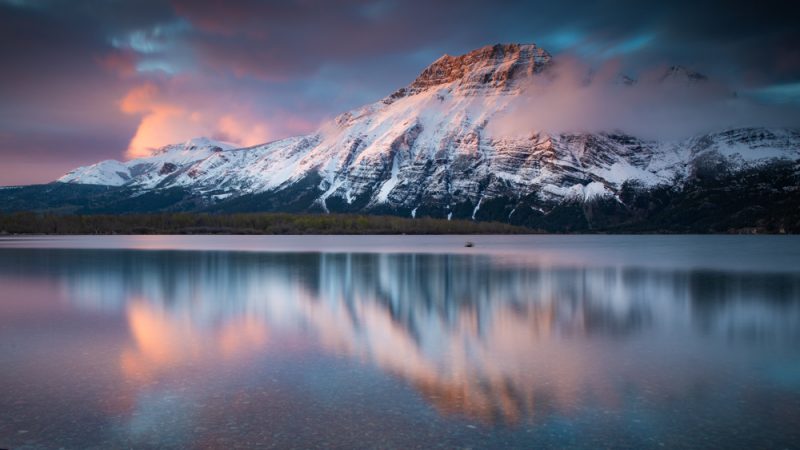 Yes, Jodie got her bears.

In fact, there were bears all over the place in Alberta this year.  Over 3 weeks in the province I probably went out taking pictures 8 times. I think I saw a bear on 6 of those times.  In fact, on my last day I had an encounter with a bear that was way too close for comfort.  We’ll get to that.

With Jodie, I think we saw 6 bears in total.  After she left, I saw about 5 or 6 more.  There were bears literally everywhere I went. 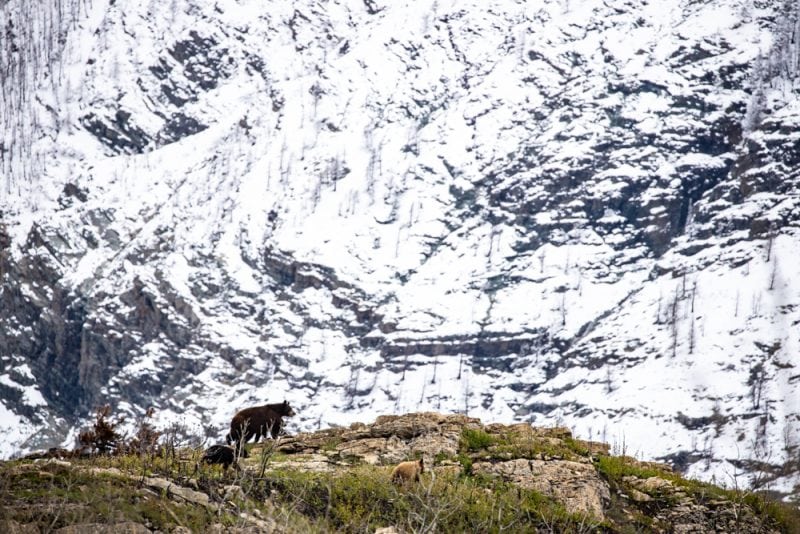 The ones above were seen at Waterton Lakes National Park.  There was actually a mama bear with three cubs.  And, amazingly, 2 of the cubs were the cinnamon bears – which are almost blonde in colour. 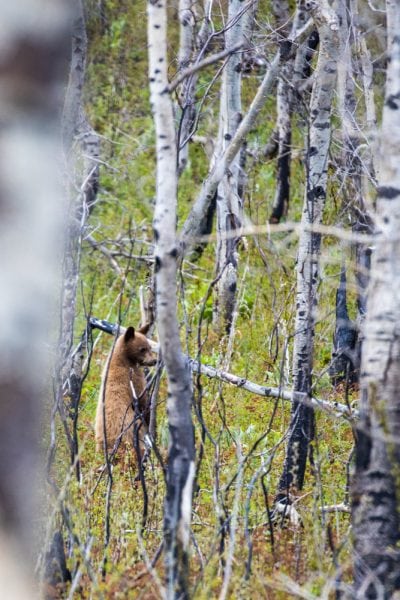 Below, I found this mama black bear and young cub near Crowfoot Glacier on the Icefields Parkway.  The little one was so curious about the cars that it actually took a small bite out of the bumper of an onlooking car – presumably checking to see if it was edible. 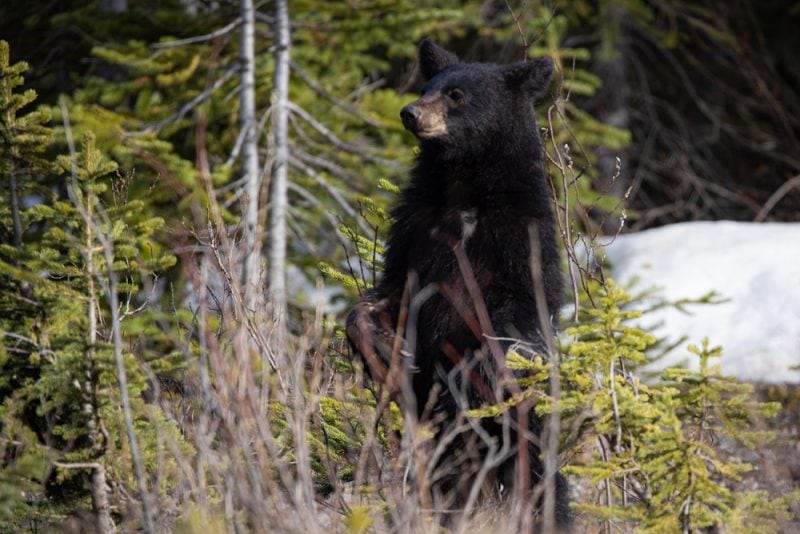 Finally, I had an amazing sighting near Castle Mountain Campground where I spotted a massive black bear off in the trees.  He was a long ways away, but clearly visible.  He was relaxing and not foraging at all which I found quite strange for this time of year.  Then, a female adult black bear came and got cozy.  It seemed like they had been mating.  It’s extremely rare to spot 2 adult black bears together like that. 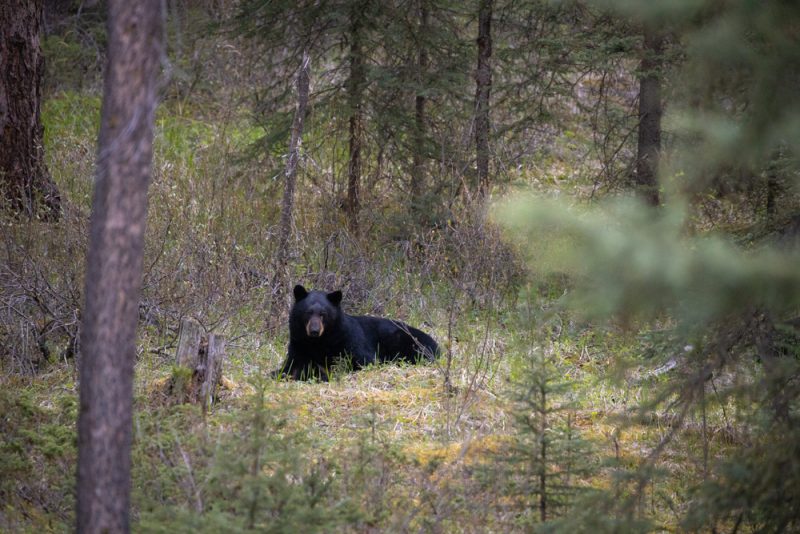 It should also be noted that despite warnings up at Bow Summit for Grizzly Bear activity, I didn’t see a single grizzly the whole time I was in the Rockies.

A place I’ve photographed quite a bit, but have never come away with anything I love, is Bow Lake.

Up on the parkway, this spot is really spectacular. But for whatever reason, I’ve never been able to draw the beauty of it on camera.  So, this time I tried to explore different angles.

As you can see on the video below, I got really low.

In fact, I was so low to the ground, my camera was actually sitting on the ground.  I was a little bit worried that my lens was going to get water in it, because there were parts that were touching the water.

But, I think the images that I walked away from Bow Lake this time – though not spectacular – were totally unique. I love going to a popular photography destination like that and coming away with something new.  I felt like I achieved my mission. 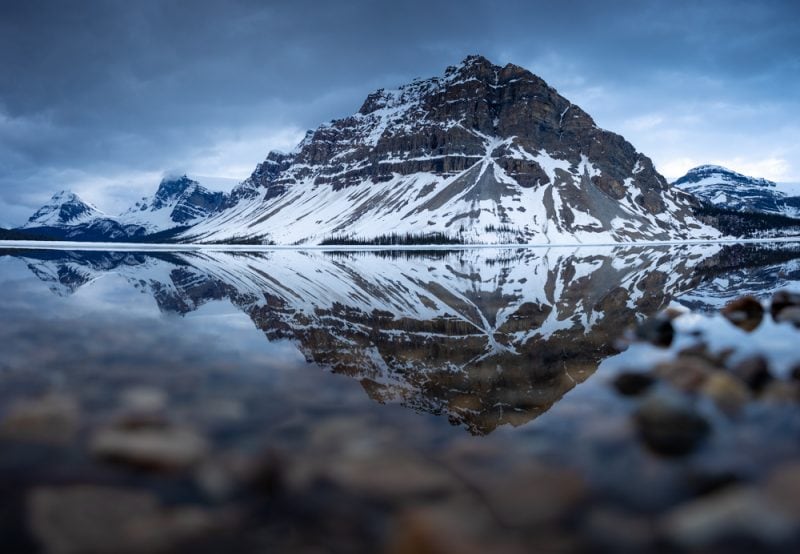 Canmore in the Fog

I have a spot in Canmore along the Bow River that used to be kind of my secret spot.  Then, someone geo-tagged it on google.  Now, there’s even a parking lot in front of the bush trail that leads to it. So, one morning, I got up early because I was curious if the location changed. Of course, I also wanted to get a photo or two.  I also wanted to test out the new Lee100 filter system that I added to my camera gear.

However, as I rolled into Canmore I ran into a massive wall of fog.

Knowing that the fog would have been caused by the river, I decided to change plans on a whim and try to climb some altitude.

So, I drove up to the Nordic Center where there’s a small pond that’s dammed off.

It sits basically on the edge of the top of the fog.  So, with some patience I managed to capture some moments where the fog was low enough, and the light was hitting the peaks above.  I think I ended up walking away with 2 or three images I liked. 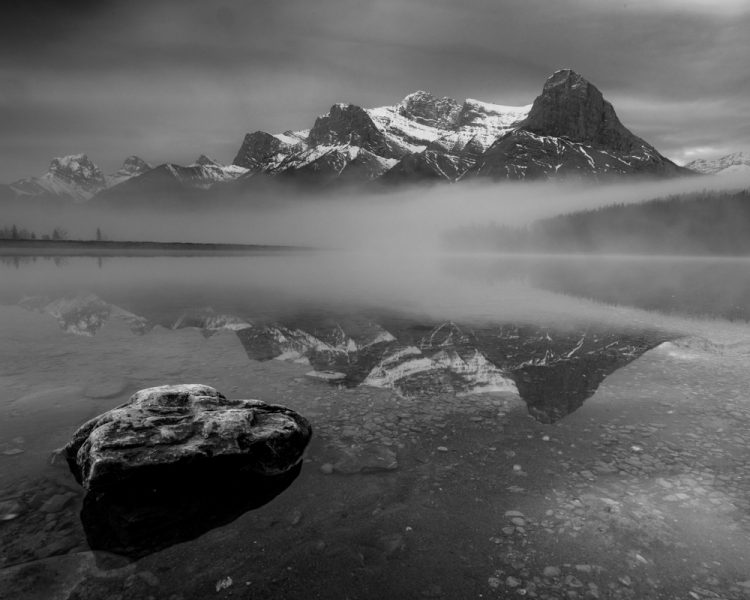 The one above is a bit of a subtle image I shot before the light got good.  I think the black and white really works.

The image below was a 3 minute exposure in which I managed to get some awesome motion in the sky.  Not a bad morning considering I was so sure it was going to be a bust because of the fog. 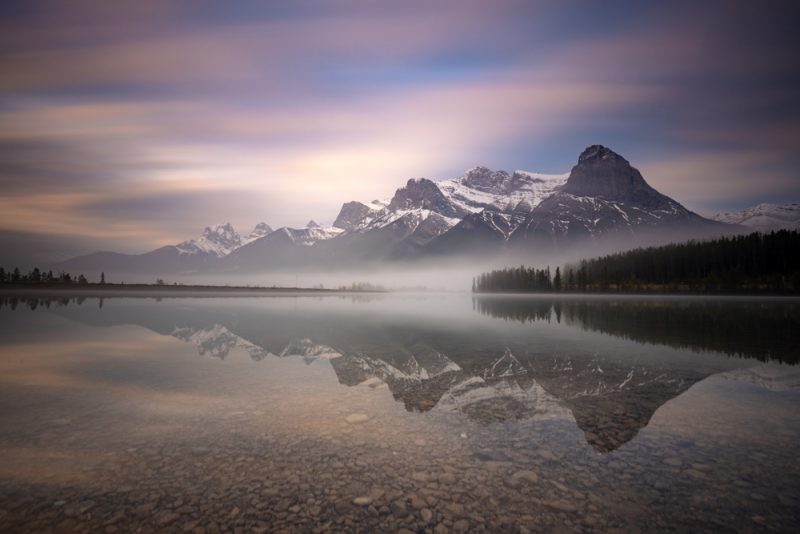 As someone who grew up on the edge of the Rockies, I’m a little bit embarrassed that I’d never been up to Lake O’Hara before.  But, the truth is that in the summer months the campsites and huts are often booked up so far in advance that it’s impossible to get somewhere to stay.

This time of year, though, you can basically get Lake O’Hara to yourself.

The bus up doesn’t start operating until mid-June. And the campsite is still under stone.  So, with few people willing to risk the spring weather and hike the 11km up the road to the lake I got the chance to head up.

I stayed at Elizabeth Parker Hut which is really cool. 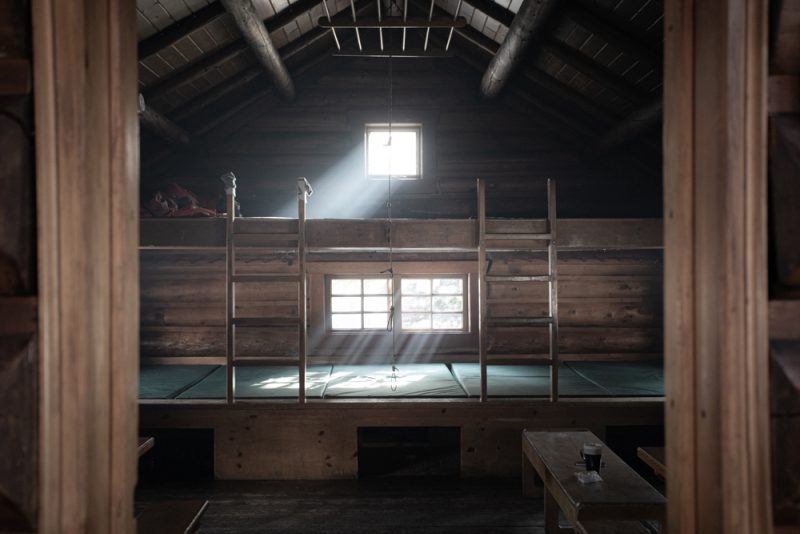 On the first night, there was a French backpacker up there. The second night there was a mother and her son up for night. So, essentially, I almost had this incredible – and often incredibly busy – place all to myself.  It was incredible.

From a photography standpoint, though, it was much more of a struggle.

The first day, I headed down to the lake front and managed to get a decent photo of the reflections.  However, the weather was almost too good.  I didn’t see a cloud the entire time I spent up at the lakes. 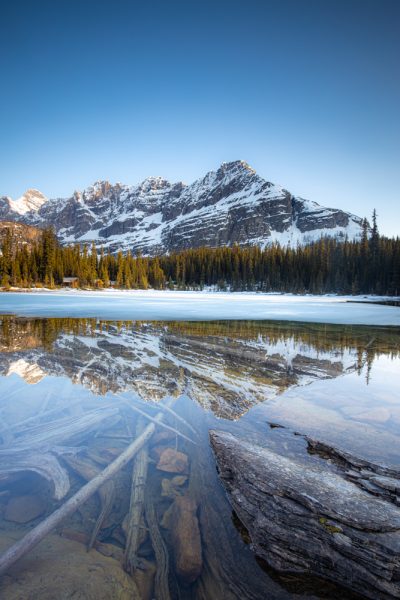 The following morning, I got up and hiked around Lake O’Hara hoping to find a unique composition.  In the end, I found a downed tree frozen under some beautiful ice that kind of worked. I do with there was more of a defining point of interest at the other end of the leading line though. 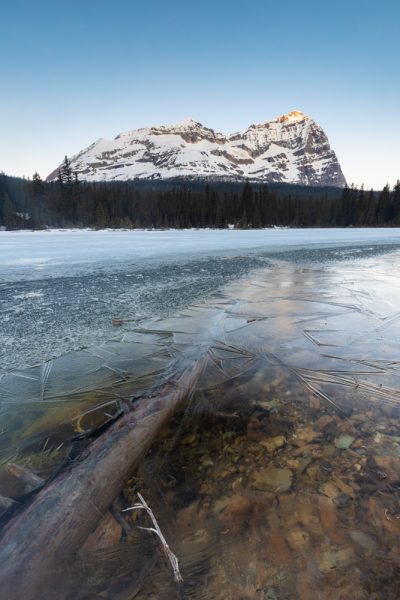 That evening I attempted to hike up to a plateau known for having some epic views over Lake O’Hara.  Unfortunately, the snow was still a little bit too high and I couldn’t get where I wanted to.  I got nearly almost the whole way up, though, and found this photo spot.

On my way down, though, I got caught in a bit of a scary situation.  I slid down the snow pack and found myself at the bottom.  Down there, I had to make fresh tracks.  What I didn’t know was how deep the snow was.  At one point, I feel into so much snow that I was over waist deep.  And thanks to some warm afternoon weather, the snow had essentially turned to wet cement.

It was a bit of a scary situation, but after calmly digging myself out, I managed to swim across the snow to some more stable ground.

After my hike up to Lake O’Hara, I decided to head back to Yoho National Park to photograph my favourite mountains in the Rockies.

However, it ended up being a bit of a fail.

The spring run off started, and I hadn’t realized it before I headed out.  So, when I got to the Kicking Horse River – which leads to Mount Stephen –  the river’s edge was basically flooded.  As a result, I couldn’t get close enough to the middle of the river for the photo I envisioned.

I decided, then, to make a quick run to Emerald Lake to try to capture sunrise.

The light didn’t cooperate there, but I did manage to make a photo. 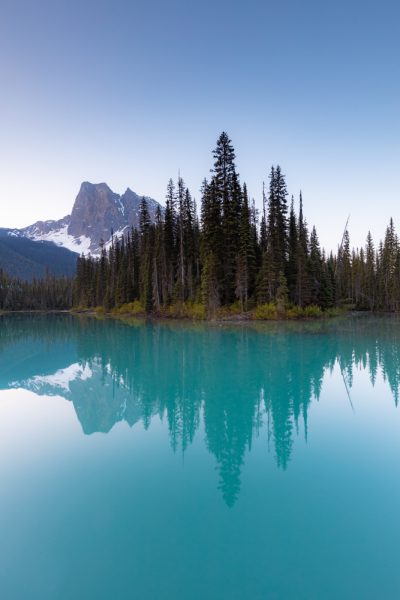 Scared by a Bear…

Before leaving Canada, I wanted to go and try to photograph another one of my favourite mountains.  I headed out to Castle Mountain to try to photograph it under the stars.  But, as I was setting up my camera gear a bear came walking across the road not more than 10 feet from me.

I ran and hid behind the Jeep as the bear stared at me from a bush – and I kept my flashlight on it.

Slowly, I snuck back out and grabbed my camera and stuck it into my trunk without closing it.  A retreated back to the driver’s seat and drove away.  Then, when I was far enough away and thought I was safe, I packed up and headed home.

I didn’t even bother trying to photograph a sunrise. I was done.  I packed up and headed home, packed my suitcase and left the country.

No joke. I did just leave after my close bear encounter.  But, it was planned.  I had a flight to Trento, Italy where I spoke at a conference called Traverse.

So, what’s next?  Well, right now I’m in Kotor, Montenegro. I think there will be a post from here.  But, as you probably have come to know if you’ve been following this blog for a long time, sometimes I post twice a day. Sometimes once a month.  I guess that means that I’ll see you when I see you.  And there will always be a new video up on my YouTube channel.