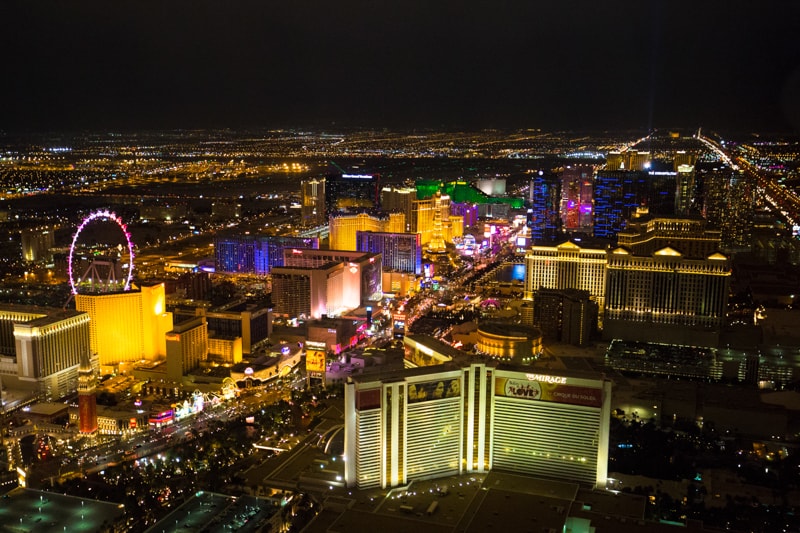 The is my favourite image from the helicopter ride. It's the only one that I got the nice leading lines of the strip.

A Helicopter Ride over Las Vegas with Maverick Helicopters

On my trip to Vegas, I had the chance to do a number of things I wouldn’t normally be able to do (read: afford to do).  It’s one of the joys of being a travel journalist; sometimes, you just get to do really cool things.  Some days you find yourself living on a dime at a shabby hostel, and some days you’re in the lap of luxury at the Aria Resort and Casino.  One day, you’re riding a chicken bus in Guatemala, the following week you’re flying over the Las Vegas strip in a helicopter.  This life I live, it really is amazing.

Anyways, since I’ve never gotten the chance to shoot any areal photography at night, I took this as a bit of a learning opportunity as well as a chance to maybe teach others how they might go about doing it in the future as well.  Check out my video to see how I did.

Maverick Helicopters are absolute class, and I’m very thankful to them for giving me the opportunity to see Vegas this way.  The flight lasted only about 10 minutes or so, but covered the entire strip on both sides.  Personally, I would have preferred a flight during the “blue hour” but I can totally understand why they want to show Vegas off in all it’s nighttime glory.

Maverick doesn’t just do trips over the Vegas strip, they also do trips to the Grand Canyon that look fantastic.  So, if you’re in Vegas and you’re looking to do a helicopter journey somewhere, be sure to look them up. 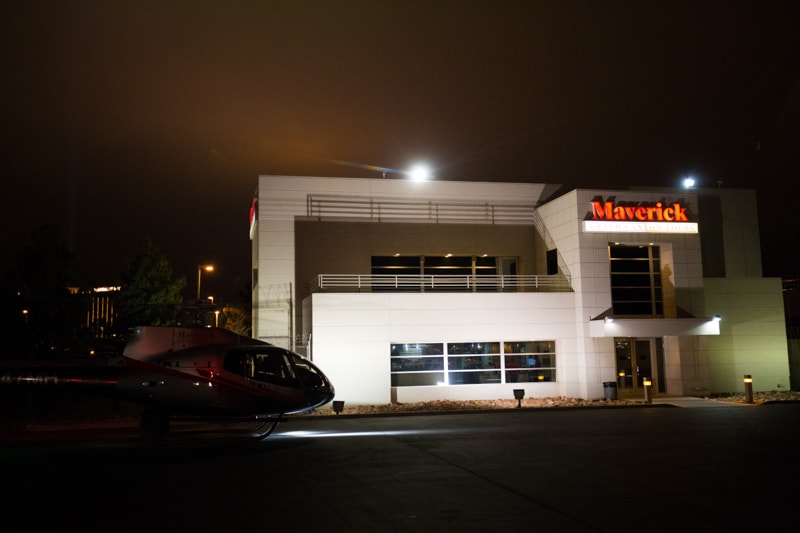 The Challenges of the Shoot

Whenever I go into a situation that I haven’t been in before, photography or not, I try to analyze the potential challenges I’ll face and hope that I can prepare for them.  With this shoot, there were a couple things I was a little bit concerned with. 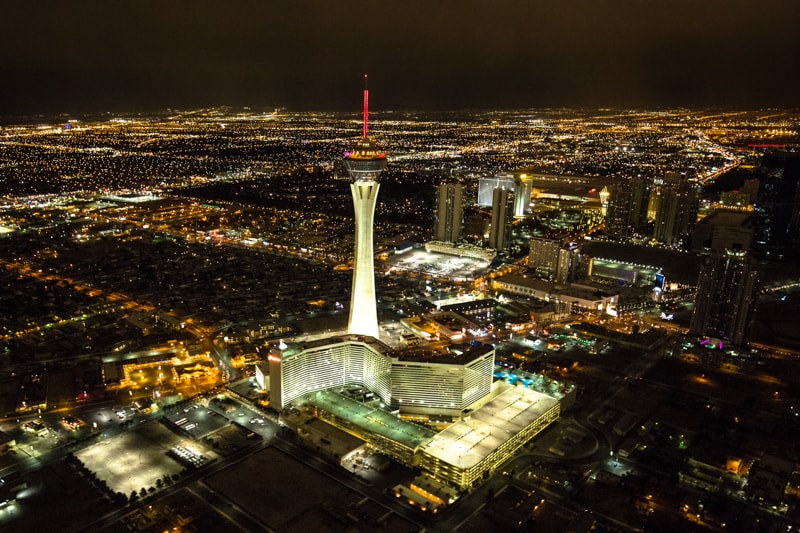 Figuring out the Settings

In the end, figuring out the settings was fairly easy because I didn’t have any other options. I knew I wanted 1/50 seconds, so I went to f/4 and then rolled my ISO up until I got the proper exposure.  In the helipad, I took some test images and “chimped” them to see if I had the right exposure, which was at ISO 5000.  But, after take off I realized I needed to bump up to ISO 6400.

The question might be, would I have been better off with a faster lens?  I think so.  Personally, I think a 16-35mm f/2.8 rather than my 16-35mm f/4 would have been better.  I could have gotten a whole stop of light more out of that lens meaning I could have dropped the ISO to 3200.  I don’t think it would have been too soft at f/2.8 because the subject is so far away.  I did shoot some images at 50mm on my 60D at f/1.8 but the lens just wasn’t wide enough.

A couple of the Photos from the Las Vegas Helicopter Ride

The trip went by so quickly it was a bit of a shame.  I could have been up there all night messing around.  In the end, I think I really only got a couple images I really liked.  But, when you’re winging it like that, it’s going to happen.

What’s Next on the Photography Blog?

From Vegas, I’m headed west to San Francisco.  I’m stoked for it, as I haven’t been to San Francisco since I was about 8.  I’ve always wanted to photograph the Golden Gate Bridge, so I’m going to look for the best places to photograph it.  From there, we’re headed to Joshua Tree and then off to Colombia!  Stay tuned.