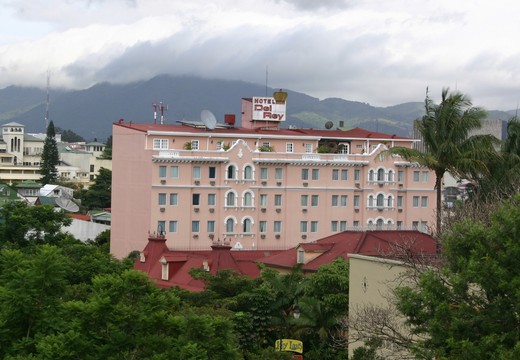 I have spent a lot of time in San Jose, but had an extra day and night to spend in the city. As such, I looked for ideas as to what I could do that was a little bit out of the ordinary.  I wanted to write a story on San Jose, but was lacking creative material.  One of my friends jokingly said “why don’t you go to ‘Rey’ and watch old men acting like big shots as they pick up hookers?”  The ‘Rey,’ formally known as the Hotel del Rey, is one of the most famous hotels in San Jose, Costa Rica, not for it’s amazing rooms, but the fact that the hotel basically serves as San Jose’s largest brothel for freelance prostitutes.

For those who do not know the laws of Costa Rica, prostitution is a completely legal trade, and one that is quite prevalent, especially among foreign travellers. As long as a girl is of age, has proper identification listing when her last medical examination was, prostitution is a common, if not endorsed, trade in the country. What is illegal, however, is pimping, meaning that women have to freelance and lack what “security” a pimp can offer. Thus, the majority of women in the trade use massage parlours, strip clubs, and hotels like the Hotel del Rey as not only their office, but their source of protection.

For the record, I want to state that I am in no way neither condoning or endorsing prostitution in this post.

As I step through the glass doors of this famous hotel my heart races as I know that everyone outside the doors, as well as inside, thinks they know the reason I am there. I walk to the reception desk as a pre-season NFL game plays on the television and smoke hangs gently in the air above wooden tables and green casino felt. As I register in the book of the hotel I can feel eyes upon me, both from foreign men and the women that sit grouped together at tables smoking cigarettes.

I check into my room and enter the huge space. I sit down on the bed and turn on my computer before wondering to myself how many times that bed had been “used.” As I try to get some work done my mind can’t help but wander and wonder about what’s going on below me in this famous bar.

“It’s still early,” I think as I assure myself that it’s probably business as usual.  Old men having lunch while paying for beautiful women to accompany them; as if anyone actually believes they’re really “with” them.

As the digital clock on the nightstand beside me flickers to remind me that the evening is approaching I feel my stomach rumble from hunger and know that I have to come out from my hiding spot to find food and drink.  Why did I come here?  My journalist curiosity has driven me to spend a night among the weary.

I leave the hotel with my head down, hoping no one will recognize me, even though I am in a foreign land, or perhaps just hiding my shame. As I eat my traditional Costa Rican casado (which ironically translates to married) as my mind is still set on the “Rey.”

When dinner ends, I race up to my room trying not to look around the scene which is starting to build in activity in the hotel. My two sides begin to fight with themselves as they always seem to do in these types of situations. My shy side doesn’t want to be seen downstairs, it doesn’t want to have to deal with telling women that I’m not looking for an hour or two of companionship. It is telling me that I can still write an article about this place without going downstairs. My journalistic side can’t help but be curious about what’s going on; it can’t help but remind me that there is no such thing as a bad experience, just a good story. I pack up my computer and breathe deeply before dipping the electronic key back into my pocket and sneaking out of my room quickly.

I walk into the main lobby of the Hotel del Rey and again feel eyes upon me.  But as I look around I wonder if perhaps it’s my own imagination playing tricks on me.  Everyone seems occupied.  A couple of young women sit at the bar flirting with a man no older than 40.  A table of older men, obviously American are sitting to watch the Sunday NFL football games decked out in their team gear.  I scan the scene quickly, without trying to look like a target and decide that the casino is probably my best bet for seclusion.

As I slide my way onto a busy table of blackjack and toss 60$ dollars down on the table I look back at a gallery of onlookers resting their arms on a ledge; they must not be allowed in the casino without being invited I think to myself.  They’re so beautiful.  Stunning, nearly all of them.  I wonder what gets them into this.  Sure, 100$ a night is great money for someone in Costa Rica, but can it really be worth it?  A friend of mine told me that the majority of them are girls trying to get themselves through university.  That it’s not a drug addiction or a lifetime career, but a means to an ends.

As the night progresses I hope that my 60$, which has now become about 100$, keeps me going.  I tell myself I’ll stay in the bar until my chips run out.  I would watch from a distance, like a bad journalist, until it was time to run and hide in my room for the night, alone.  The bar begins to fill, and the crowd isn’t what I expected.  It’s not just older men in the Rey, it’s young men, often younger than me engaging.  The difference between the old men and the young is that the young ones don’t waste time.  The older men sit at the tables with the women, laughing, touching, flirting, drinking, while the young guys head right to the counter at the Rey with their girl and head upstairs.

My head begins to fog from the Flor de Cana rum I’ve been drinking on the rocks since I sat at the table about 3 hours ago.  I look down at my stack of chips which has risen and fallen to about 200$ and decide that it’s time for one drink at the bar and then bed.  The bartender is the most beautiful woman I have seen in my life.  I sit and order my drink, the 7 year special reserve, and sip it gently while wondering what she must think of all this.  Does she think it’s shady?  Does she get involved? I’m approached at all angles by women asking if I’m looking for companionship while telling me how handsome I am, while trying to engage in small talk.  I turn them down politely while joking shyly with them that I have no idea what type of companionship they are talking about.

I take the last bit of my drink and thank the waitress and wish her a good night.  As the elevator doors begin to close I hear a shout to hold them.  A man enters with a girl on both arm.  He thanks me and then asks me where my girl is.  I look back and tell him I’m alone tonight, and that I won’t be partaking.

He laughs and says, “son, in Costa Rica, you don’t ever have to be alone.” The girls laugh too, although I’m not sure they understand him.

As the elevator doors open on the 3rd floor and they say their goodbyes as I continue to the 4th.

I slide the key into the electronic reader and look at my big empty room.  I am shaken by the realization of why some men engage in this: the world can be a lonely place sometimes.

As my eyes begin to weaken I hear the sound of a woman faking her pleasure and a man announcing his own in a room nearby.  I roll onto my side, place the pillow over my ears and attempt to shut the noise out.

I wake up at 6 in the morning pack my bags, and head out of this infamous hotel.  In the lobby, it is business as usual.