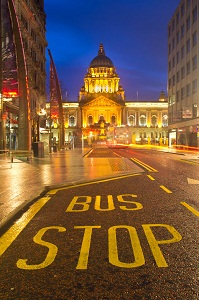 A Stop at City Hall in Belfast – Photo of the Week

The first couple of days I spent wandering the streets of Belfast I did so quite obliviously. I found myself searching for a past which seemed to be hidden beneath the surface. However, when I told the owner of City Backpacker one day that I was going to go do some shooting downtown in the morning, the look in his eyes reminded me that they days of violence weren’t all too far behind. I, of course, meant photography, but a person could see how the words could be confused in a city that just twenty or so years ago what listed as one of the killer Bs including Belgrade and Beirut.  It wasn’t really until I took part in a black cab tour in Belfast that I realized that the tensions are still very much alive.

However, things do seem to be changing; and despite the fact that the tension quite obviously simmers below the surface the improved economy and increase in tourism appear to be helping quell those feelings. The city’s downtown might not be as densely packed with churches, museums and attractive buildings as Dublin, but in many ways it had even much more charm. This photo is of the City’s Hall at dawn.

The early bird gets the worm. To be quite honest this photo was a challenge to capture. I hiked downtown from the hostel at about 5:30am under some beautiful clouds. But, as the light began to turn nice for me the clouds proved their capability and began dumping down. I put a useful plastic cover, which I call a camera condom, on my DSLR and began shooting in the rain. However, the wind kept blowing mist onto my lens causing blotches. I spent about 70% of my time wiping my lens and nearly missed the right light in the process. This was one of those moments in photography that can be so frustrating. However, once the rain stopped and the clouds began to pop in their colour it became one of the most rewarding shoots so far in my time in Europe. I love the rush that’s involved with capturing the image in the limited amount of time you have to do so. The challenges of photography are, at the end of the day, what keep me shooting on a daily basis.

For the photographers, this photo was taken at 18mm with an aperture of f16 and a shutter speed of 30seconds.  I shot it at ISO 100.