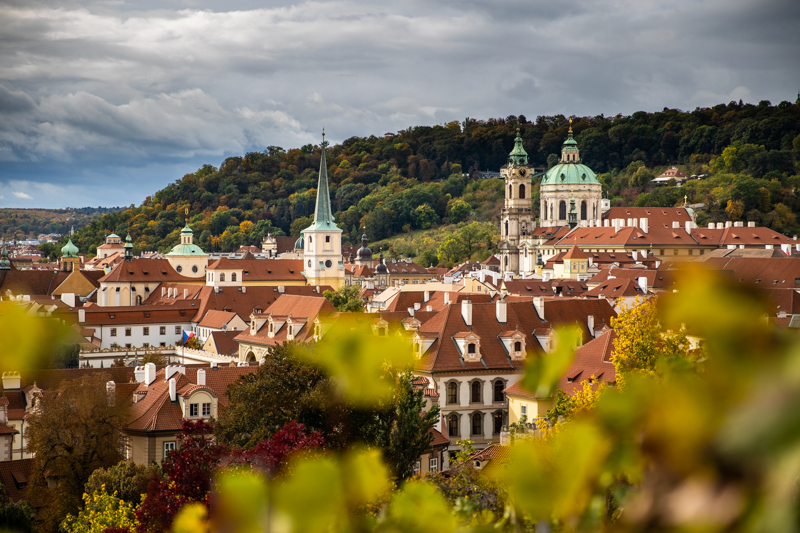 A Weekend of Photography in Prague

I know I’m slow on the blog posts, but it’s been an intense month.  I’ll write a blog post all about it soon. But, in short, it’s been a roller coaster.  As such, I’m obviously a bit slow in dropping my 3rd blog post from my Monograms assignment in Europe. This time, it’s from one of the most photogenic cities in the world: Prague.

And though I only had a couple days in the city. And though it was a bit of a battle to photograph beyond the classic shots and the Chinese wedding photography shoots (I’ll get to that), I did get some images I really liked.

Let’s go through it. 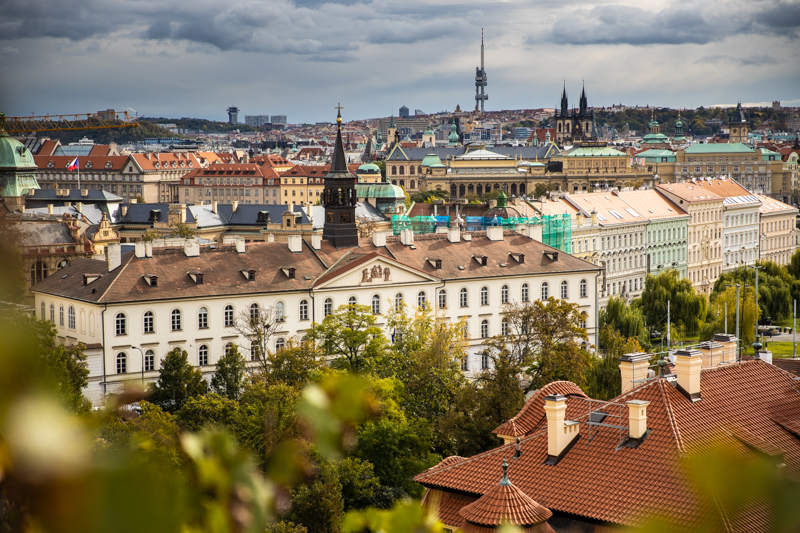 A Night in Prague Without a Camera

One of my photography resolutions this year was to go out without my camera more often.  I wanted to have the opportunity to enjoy the travel experience more than I have lately. I think that having a camera often leads you to feeling detached from your destination.  Sure, it can mean that you go out and explore more. But, you can feel a little detached emotionally. Or, your emotional experience from a destination kind of revolves around whether you got good photos or not.

So, on a rainy first night in Prague, I joined on of Monogram’s optional tours which was a private walking tour called “Prague at Night”.  It was fantastic. It gave me a really good feel for the city, and some photo ideas for later on.

How Much Photo Editing is Too Much?

I headed out to Charles Bridge for my first sunrise photo shoot in Prague.  But, the conditions were basically the opposite of what I was hoping for. I got some incredible light, but it was brutally back-lit.

There’s a video showing what I’m talking about below.  But essentially, it was a battle with the light, but nothing a little bit of editing can’t fix.

It was also one of those situations where I really didn’t know if I got anything worth keeping until I got my images from the sunrise in Prague back on my laptop and got an edit on them.

In the end, there were 3 photos I wanted to talk about.

Knowing the right direction to photograph

Back light is tough.  And, sure, you can blend images together and get great results sometimes. And, honestly, I probably could/should have done that here.  But, I didn’t. So instead you now get an example of the difference between front light and back light.

In the first image, I tried to shoot directly into the pre-sunrise light on Karlov Most Bridge.  But, even with 5-stops worth of filters, the exposure is tough. Essentially, in this light, the only thing you can really do is a silhouette.

But, if you turn around and use the rising light to your advantage, you get really nice soft light evenly lighting the city of Prague at dawn.  It might not be as dramatic as sunrise light, but it is nice. And definitely easier to work with.

The second image I wanted to share was the one I really edited.  And, rather than talking too much about the image itself, I want to talk about how to know when you’ve over edited an image.  And, to answer that question I’ll ask one. Can you see anything “destroyed” in this image? I mean, does anything look wrong?  Or, does anything like like it was faked. I don’t think so.

So, when you’re editing your photos and wondering if you’ve pushed it too far, have a look at the details and see if anything looks wrong.  If it doesn’t, and you like the image, than you’re OK.

Also, photography is subjective. If you like it, that’s what’s important. 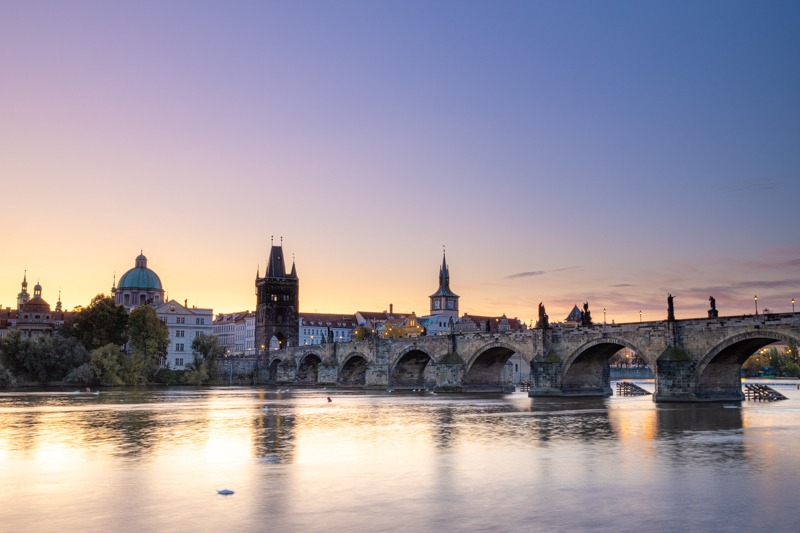 A Goose, and a Missed Location

Finally, I took an image of a goose (or a swan – I honestly don’t know the difference) in front of the scene.  I’m OK with the image, but if anyone is coming to Prague for photography, check out the location I’ve linked in this map. It’s a much better spot where you’ll get lower to the birds, and have a better angle on the city.  I found it after sunrise was over, but hopefully it’ll help one of you get a cool photo. 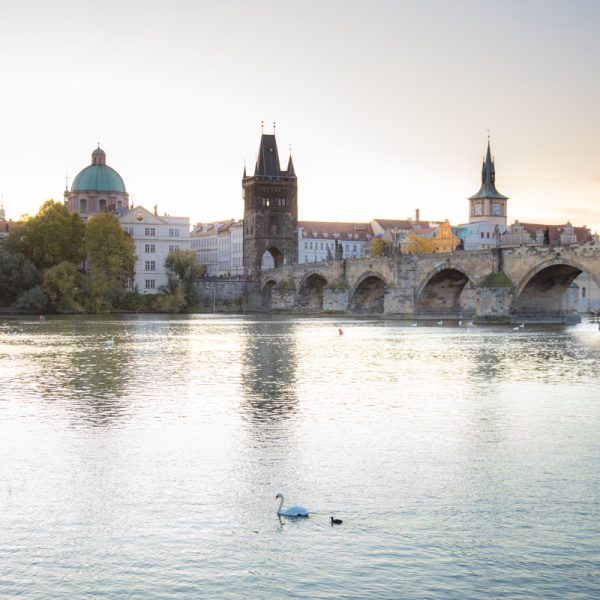 That morning, I jumped on one of the Monograms included city tours.  I kind of explained this in another post, but essentially Monograms is semi-self guided tour company. So, you have the freedom to explore on your own, or join excursions.  In every city there’s also an included city tour. Since my assignment was to photograph the tour, I went.

Normally, I don’t take pictures in the middle of the day. So, it was a bit of a departure from my usual work.

But, I’m so glad I joined.  I ended up capturing 4 images I really like.  And if you’re curious, I kept 11 images from the daytime photo excursion.  I’ve shared a couple of my favourites below in a gallery.

Sunrise in the Square

Now, while I don’t normally photograph midday, sunrise is my photo jam.  I love sunrise. I love watching the world wake up, and capturing it come to life.

But, this time of year it’s a bit hard as a photographer in Prague.  Sunrise was 8am so there was so much morning activity. Delivery trucks, tourists, dog-walkers, and Chinese wedding photography shoots were everywhere.  Though some photographers might dread the 5am wake up call of summer, I love it. It usually means I have places to myself for a little bit longer.

Still, I managed to grab a photo of Prague that I’ve worked on but never achieved in the past.

Old Town Square is photography paradise in Prague.  But, it’s also a little bit overwhelming with so much going on.  But, I found a composition of the astrological clock and square behind it that I really like.  And while the sunrise light wasn’t perfect, it was very good. I’ll share both my blue hour and sunrise images with you. 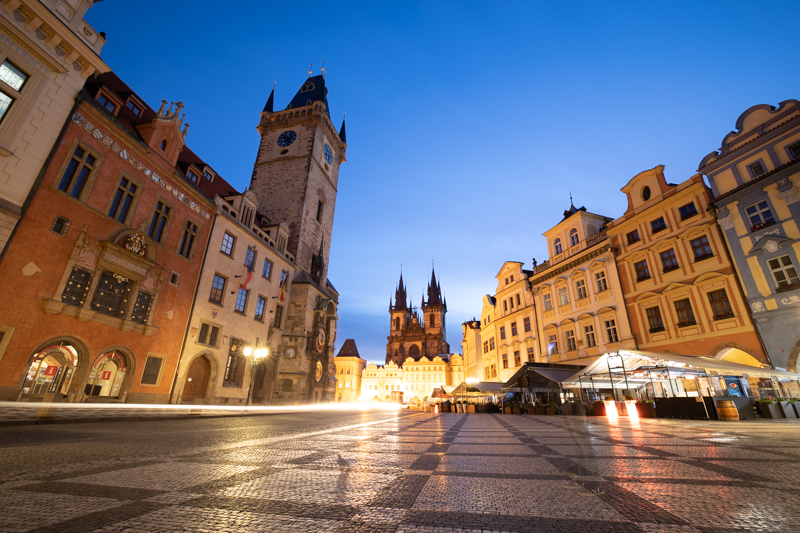 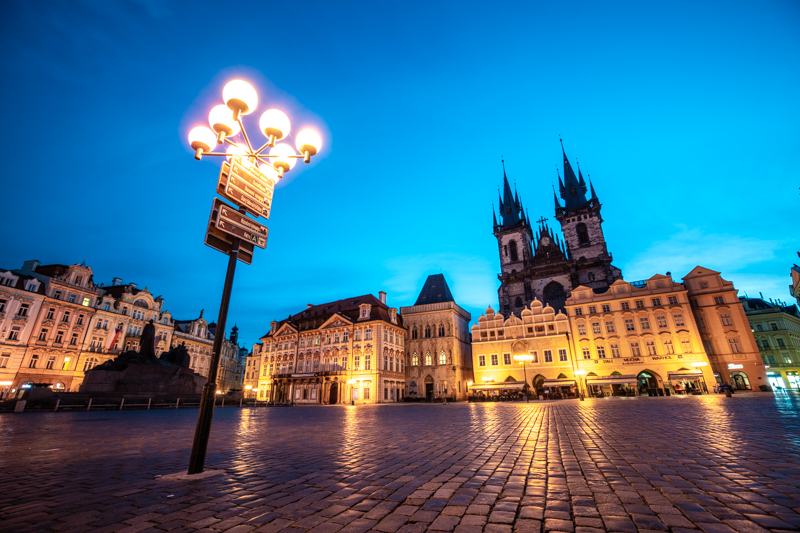 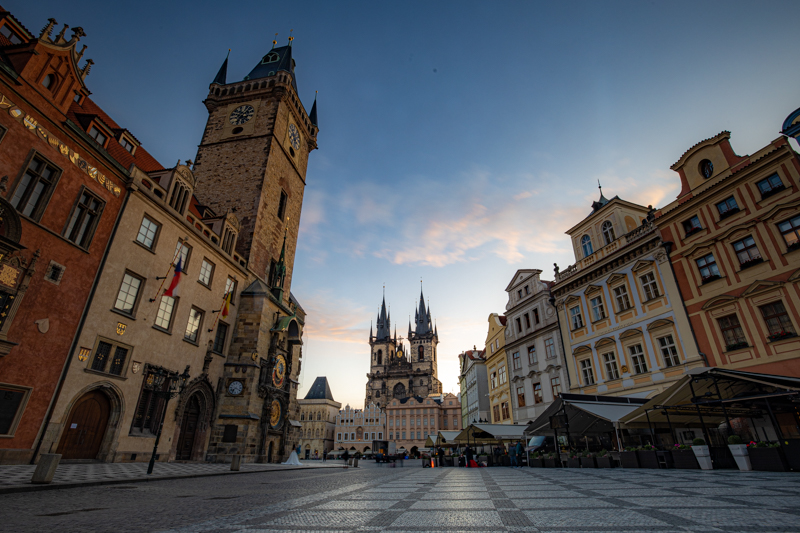 Much like how I don’t normally do photography in the middle of the day, I rarely do food photography. But, I do love eating.  So, when one of the Monograms options was a food tour of Prague, I had to jump at it.

That said, I definitely did more eating than I did photography.

I was impressed, however, with the foodie community in Prague. I feel like it’s evolved a lot since I was there for the first time (nearly 8 years ago).

An Unreal Sunset Location in Prague

When I say that this was an unreal sunset photo location, I’m exaggerating a bit.  It’s a good location, but it’s totally dependent on having an epic bit of light.

Luckily, the light was insane. Like, legitimately one of the best sunsets I’ve ever had the chance to photograph.  I can’t really take credit for the image, because it was all the light. It was a bit of a challenge to create a composition that felt right, but it didn’t matter with a sunset like this. 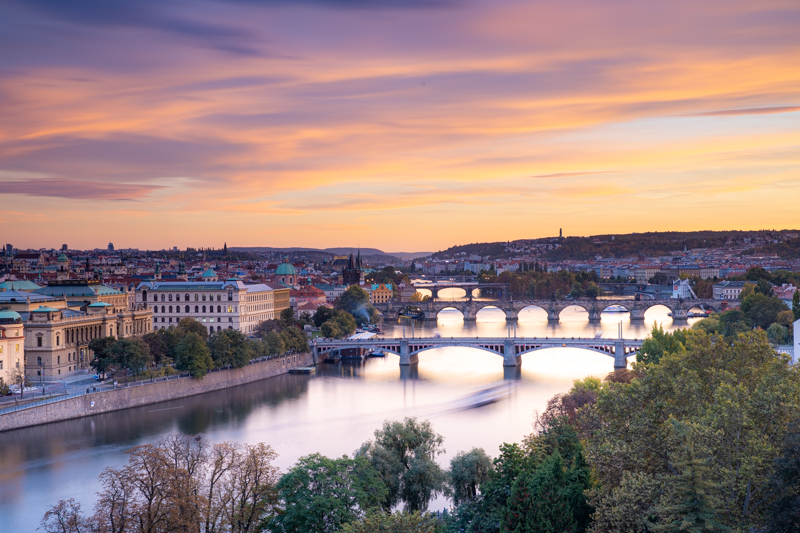 The location:  It’s a short walk here from the old town of Prague. But, the exact location I took this photo of Prague is tagged in this map.

I created this content while on a paid assignment for Monograms in Europe.  However, the content in this post is my own opinion and experience and isn’t vetted, influenced, or written by Monograms whatsoever.

If you want to read a bit about Mogorams and the trips they offer, visit their website here.

There’s a lot going on.  Though November is workshop-free, we’re kind of all over the place. I’ve been in the UK, Catalonia, Andorra, and am now crossing the Atlantic to Brazil.  From here, I’ll be heading up to Ecuador with Jodie to run a trip with Morten Hilmer. Then, it’s up to Arizona for the winter months!

Oh, and there’s some big news on the way. And no, I’m not talking about the new 3 Legged Thing tripod line.