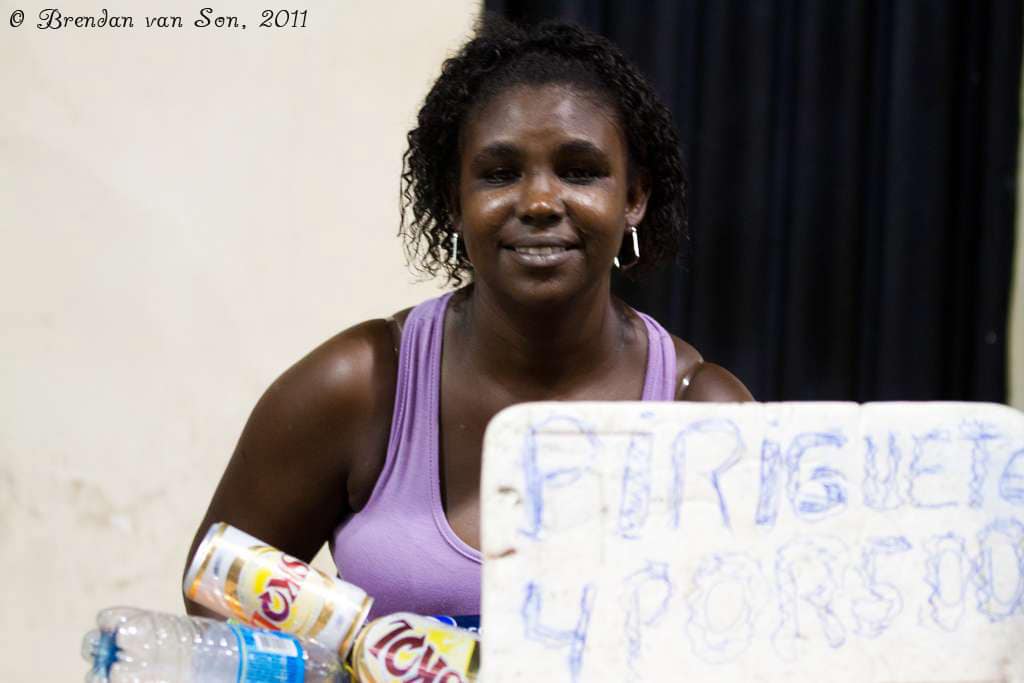 Armed with a press pass and my camera I climbed to the roof of the hotel with hopes of grabbing some shots of the amazing scene that is Carnival. However, when I reached the top my eyes gazed downward at a divide as obvious as the lines of a child’s colouring book. A ring of black men and women work hard to control a rope serving as the divider between those who have paid to enter a “bloco” and those who haven’t. My eyes begin to scan the “in” crowd searching for any sign of a person of colour beyond the coco Brazilian tan. To my disappointment I finally spot someone, selling beer from a cooler over his head. But as the music blares through the loud speakers and bodies gyrated to the deep rhythms of Samba music, no one seemed to notice. 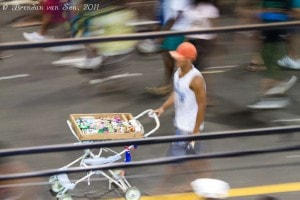 Salvador da Bahia was one of the first destination points for slaves brought to the Americas. Its history is about as deeply seeded in the slave trade as any on the planet. Although the slave trade may receive the most attention in North America, it was actually here in South America and the Caribbean where a vast majority of slaves were brought. The north-east of Brazil became the home for the middle point of the Colombian exchange which sent finished products to Africa, slaves to the Americas and raw goods from back to Europe from the Americas. In Northern Brazil, slaves were put to work growing crops such as sugar, tobacco, and cassava in the hot sun. Obviously, Slavador da Bahia will forever hold its own place in the history of one of the most terrible acts of human kind. So much so, in fact, that many feel that the sentiments of race still persists to this day.

I recall a conversation I had with a women in the bus in the south of Brazil about a month before Carnival. She told me of her visit to Canada a couple of years ago. She said in a very matter-of-fact tone that she “liked the white people in Canada, they were nice.” The sentence alone drove home the point she was trying to make, but she furthered her point with her follow-up statement that “in Brazil white people hate black people.” A statement so strong that it wrenched my stomach. Hate. I’m sure white people don’t hate black people, but after the hundreds of years of sharing the rich lands of Brazil, does a separation still exist? Could hate based on skin colour possibly still exist? In a free country? 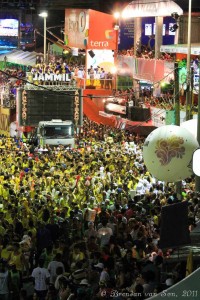 As I continued to watch the proceedings of Carnival, and as the various parades made their way towards me I tried to let my soul dance along with the music, but my mind couldn’t help but immerse itself in the presence of what appeared to me as racial segregation. I look down from my perch at those selling water, beer and snacks from fabricated mobile stands and can’t help but realize that they are all dark skinned. Another bloco begins to make its way towards me and I look down at the dividing ropes protecting those who have paid to be inside. Those inside are mainly Caucasian and those dragging the rope are nearly entirely all, again, dark skinned. I can’t help but think for a short time of the irony that it seems as if the dark skinned rope men and women seem to be holding back their “own people” from entering.

A little later on a bloco passes through of nearly all dark skinned people. Yes it’s true that in Canada those of a differing backgrounds have different musical tastes, but not so much so that there is a finely drawn line in black and white. 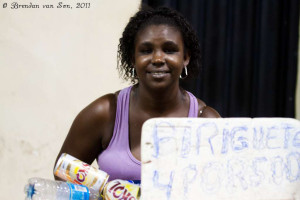 Maybe the sweetest lady I ever met in my life, a beer vendor at Carnival – Click to enlarge

I watch the group dynamics work their way out even beyond the ropes as the night goes on, in hopes that the racial divide of the blocos is music taste related, However, I continue to be startled and disappointed by what I see. Groups of white people and groups of black people seem to adherently stick together, the sight of a mixed racial group is beyond a rarity, it is an anomaly.

I soon begin to hate the ropes of the blocos. I begin to blame the ropes for creating a societal divide. I begin to resent the idea that carnival, in all its glory, could possibly be a stage for racial divide. This is supposed to be a moment when a country joins to celebrates its history, culture, and most of all its ability to come together. In the end it seems that it may be pulling it apart.

The act that traveled without a bloco – click to enlarge

I am given hope late in the night as a concert goes by without a following bloco, people without defining t-shirts or skin colours follow along singing and dancing. I can’t help but feel proud for the entertainer who has obviously turned down a significant amount of income by traveling without an entourage (to enter a bloco can cost between 100-300USD).

To talk about such issues is difficult because there is no easy solution, and no easy transition to progress.  And to write about the issues are even more difficult, it is like teaching a math problem without knowing the solution or how to get there.  However, as people carried their way through Carnival turning the blind eyes to the racial roles being acted out in front of them I couldn’t remain blind, I couldn’t remain deaf to the situation, and I certainly could not remain silent. As a writer, as a journalist, as a member of human kind I feel that it is my duty to open a stream of dialogue and a platform of discussion for things that I see as detrimental to the human community. In writing this article, I hope not to solve an issue which is obviously seeded in the very fabric of society, I simply hope to create a platform of discussion. It is in this level of dialogue where I hope we can come together, talk, listen, learn and, hopefully, begin to understand what draws us apart so we can begin to come together.