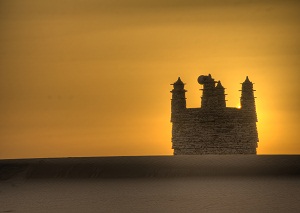 This article is a look into my time at the ancient city of Chinguetti, Mauritania. My incredible journey, including stowing away on the iron ore train, was the cover story of the latest issue of Vagabundo Magazine. If you haven’t yet, I really think you should pick it up. The story, if I do say myself, is fascinating and the rest of the issue is packed with great travel stories and photography.

The dunes of Chinguetti

“Is there internet in Chinguetti?” I ask my nomad guide, Lilame.

“No, not yet,” he says with a tone of pride in his voice. “We’ve only had power for a couple of years.”

A grin creeps its way across my face as I realize that I have an excuse to put the work that I’ve been so consumed in down for a little while. I have a hard time pulling myself away from what’s happening online, and I worry sometimes that it gets in the way of my actual travels. For a day or two, at least, this should be nice.

“This is your room,” Lilame says as he points to a barren cement space with a mat on the floor. “You can sleep in there, in the garden, or up on the terrace. It’s up to you, whatever you want. This is your home now; you are most welcome to ever bit of its space.”

I toss my bag down on my bed and hike up to the terrace. The ancient city of Chinguetti is the 7th holiest city of Islam, and a powerful piece to the past of the once busy caravan route from Northern Africa to Mali. This was home to brilliant scholars, teachers of traditional Islam, and traders alike. Today, it still feels as if I have turned back the sands of time and have found myself with the past itself.

Out in the sand gully that divides town into two pieces, a caravan of camels strolls in calling out displeasure at their owners. The old mosque begins to sound, as the call for prayer rings out throughout the city. Turbaned men wearing brown leather sandals tie the camels to palm trees before kneeling down in the desert for their midday prayers.

Camels come into town in Chinguetti

As the sun begins to lower in the deep blue sky, I set my eyes out on the desert and the stories of an ancient mosque found in the sands. I can’t help but go and search for it.

The desert sand is so soft and fine that I have trouble walking in my flip-flops, so I decide to go barefoot despite the fact that there are snakes and scorpions hiding in the sand. After a couple of kilometers – my supply of water running thin – I can see the old mosque built into the wall of a sand dune. It is one of the most beautiful sights I have ever seen.

The minaret of the ancient Chinguetti mosque from behind a dune

I hike up the highest dune nearby and look out on the view below as the sun sets behind the mosque. I breathe in a deep and peaceful breathe of air and exhale in satisfaction. It’s moments like this that make travel so special to me. The feeling that you have discovered something few others have seen. A moment at peace with the world with whom you are surrounded so neatly.

Before the sun fully crests over the horizon I head back to the base of the dunes so I don’t lose myself out here for the night and continue my walk home.

The minaret silhouetted in the sunset

At home, I pull my mat up onto the roof terrace and squeeze myself into my sleeping bag. I look up at the stars in sheer amazement. The Milky Way forcefully creates a trail across the heart of the sky, a couple shooting stars stream through the seams, and the moon itself begins to appear over the horizon.

Out here in Chinguetti, they might not have internet yet, but they have peace; and right now that peace is exactly what I need. Never in my life have I ever felt such a combined feeling of peace and harmony with the world. And, hopefully, I can bring that sense back with me to the modern world when I return to it.