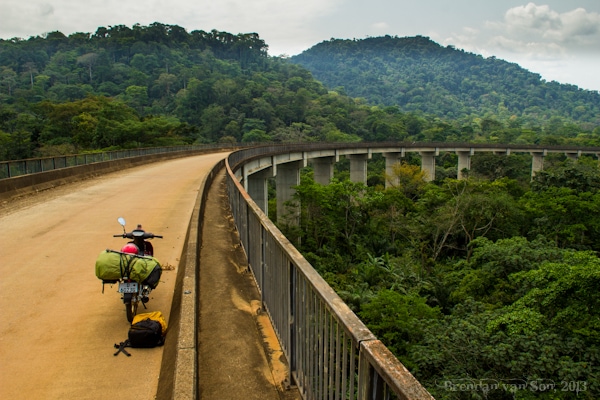 Paradise is a random bridge through the Cameroonian jungle.
Travel Photography Blog

African roads are a lose/lose situation.  When they are bad, potholes, 3-foot deep mud puddles, and jaggedly protruding stones make journeys slow, bumpy, and painful in general.  However, when the roads are good it’s perhaps worse, or at least more dangerous.  Clean smooth pavement allows drivers to drive as fast as they want, and when laws are rarely followed or enforced, there is nothing more dangerous than the combination of speed and disorganization.  At times, driving here feels like racing on a figure 8 track.

Anne Murray and I have had both sides of things so far in Africa.  At first, I would dream of smooth highways and clean asphalt.  However, after the dangerous Nigerian highways and the many near misses I had in that country, I now dream of a little bit of mud.  Cutting through Cameroon, I loved the dirt roads and although they were slow, bumpy, and tiring, there was something exciting about them.  But upon reaching the south of the country, I’m on smooth tarmac once again.  And I suppose that after all the kilometers we’ve put on, over 6,700 so far, we are due for a collision.

I’ve just finished a meeting with the head of the Mount Cameroon Eco-tourism Board.  I had planned a three day hike up the second highest mountain in Africa.  Sitting at just under 4,100m, Mount Cameroon is an imposing sight as well as an active volcano.  The town of Buea sits on its slopes.  There isn’t a flat section of road in the city.

After the meeting, Anne Murray and I descend the steep hill towards my hotel some 3 kilometers away.  A taxi passes me.  Nothing new, they are always in a hurry.  A second car passes me as well and clings to my left hand side.  Suddenly, with the one taxi still pressed to my side, the first taxi slams on his breaks and pulls to the right lane in front of me.  I can only assume he’s stopping to let out a passenger, but in the meantime he nearly kills me.

Out of instinct, I hit the horn and firmly caress Anne’s foot break.  The taxi doesn’t see me behind him and it comes to a complete stop.  With the car to my left blocking any potential exit, I’m forced to make a decision. I hit the back breaks hard and put Anne Murray into a slide.  Within a couple meters we crash into the back of the taxi and I fly over it.  I must have flipped two or three times, crashing my helmeted head as I do.  Then, I slide along my back until I come to a stop.

I lay there on the highway in pain, unable to move for a few minutes.  My initial reaction is one of fear.  I check my limbs; they feel fine.  I grab my head; it’s still on my shoulders.  Let’s see if I can stand up; I can.  My second feeling is pain, everything hurts.  From my knees I press both fists into the ground and attempt to stand up.  Finally, a wave of embarrassment runs over me as I realize that everyone is watching me.  A white man crashing a moto, he must be so stupid.

A congregation of people stands around me, but no one asks if I’m alright, they can see that I’m not.  A lady hands me my GoPro camera which has broken off and flown ahead of the bike.  The driver of the taxi comes up to me with a remorseful look on his face; I don’t need to scorn him, he knows he made a mistake.  For some reason I ask him if he’s alright, he says he is.  I tell him he can leave, there’s no point in him standing there looking at me.

I push Anne to the side of the road.  The handlebars are twisted, there is a hole in part of the engine, and the foot pedals are all broken.  My head is light.

A man sees I could use some help and calls me a taxi.  We lift Anne into the trunk and take her to a mechanic some 4 kilometers down the road.  My vision becomes foggy, and I start feeling sick to the stomach.  As the taxi drives I continue biting my tongue while telling myself not to fall asleep.  I want to pass out.

As we stop at the mechanic, a team of boys comes to help life Anne from the trunk.  I help for a couple seconds before walking towards the 2-foot deep cement ditch and puke a fierce gust of vomit.  I’m not sure if it’s a result of shock, a knock to my head, or perhaps some sort of internal bleeding.  My back is throbbing and a lump in growing.

Luckily, there is a small hospital just 300 meters away from the mechanics so I walk there.  The young doctor greets me with a smile.  As I explain what happened and what I’m feeling she smiles at me again.  I lift my shirt to show me my back and ask her if it’s bad.  She tells me it could have been worse, and that my shirt, a thin polartec long sleeve, likely saved me some seriously deep wounds.

She dabs the wounds with alcohol laced cotton swabs and I scream out to gods I don’t even really believe in.  She laughs at me and tells me she’s not even gone into the wounds yet.  The truth is it feels good.  The pain has brought energy back to my body; it has helped clear the fogginess in my head.

The doctor leaves me alone for a moment and I look around the peeling green paint in this Cameroonian hospital and laugh.  I probably shouldn’t tell my mother about this one.

When she returns, the young doctor, who carries the typical Cameroonian joy for life, carries with her a handful of needles: tetanus, anti-inflammatory, and god knows what else.  She first pricks my shoulder, and then asks that I drop my pants slightly as she applies another needle to the round of my ass.  She apologizes as she does, then laughs.  The seriousness of what I’ve just gone through doesn’t seem to register with her.

I return to the mechanic and tell them I’ll be back in four days to pick up Anne Murray.

“I’m going to climb this mountain anyways,” I say to myself despite the lightness of my head, or perhaps because of it. “I can’t let a crash bring me down.”

The truth is, I believe that there are two types of reactions to incidents like this.  On one hand, they can make you question the value of an experience.  They can make you realize that death is not worth it, and that you should calm down a bit.  In this case, you can begin shelter yourself from life’s dangers, protecting yourself from harm.  The other side of things is the realization that your life could be over at any moment and that in the end you don’t have as much control over it as you think.  I always seem to fall under the latter category.  I’ve always been less afraid of dying than I am of living a life that’s dull and meaningless.

This crash has hurt me, and the truth is it’s going to be hard to get back on Anne Murray when she’s fixed up at the shop.  However, I’m not going to let it drag me down.  In life, you learn from the negatives and you grow from there.  Tomorrow, I’m climbing that damn mountain.