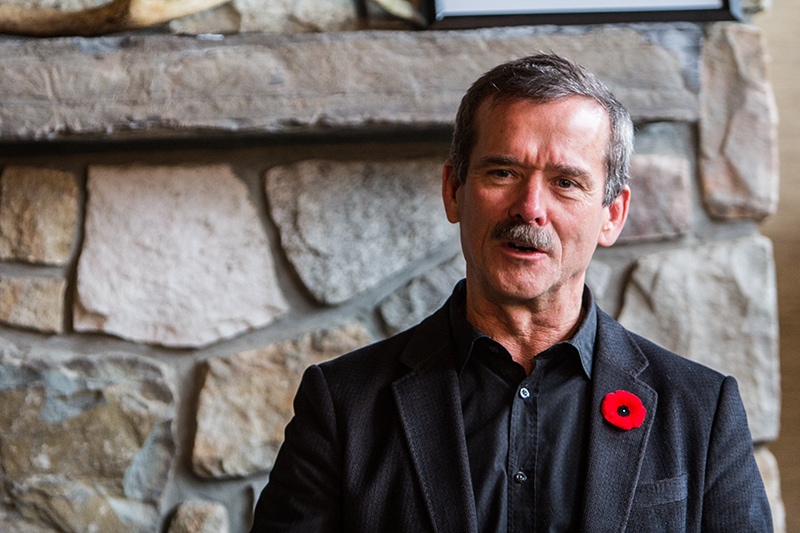 I’m up right now in Jasper National Park attending the Dark Sky Festival. And well I have another article and some photography coming from up here in a little bit, I was too jacked up on this right now not to post something instantly. I got the chance to sit in on a media Q&A with Astronaut Col. Chris Hadfield who is an absolute legend in Canada and around the world.  The man is essentially as big a celebrity as can be right now in the country.  For me, well I am a huge fan of the things he did in bringing the science of things to light for the masses, it’s his photography that has really left an impression on me.  Thus, when I got the chance, I made sure to ask Chris Hadfield a photography related question.  I asked him about his set up in space, and how do he stabilized in zero gravity with a planet moving so quickly below you?  And, after taking a shot at my travel monopod, he gave me an answer more fascinating than I could imagine. Check out his answer in the video.

Obviously, when you’re standing in a room with an absolute legend like Chris Hadfield, who has story upon story that will just blow your mind, there are a lot of interesting things that are said.  He talked about how mankind has far too much of a myopic approach to life, and what it was like to watch the world spin a complete circle every couple hours, but the one thing that stuck with me was when he mentioned that they’d shoot the camera as it was just “floating” in zero-gravity.  For some reason, that triggered absolute wonder from me.  I couldn’t imagine taking a picture as my camera just floated in front of me. Anyways, mark Chris Hadfield down as the person I’d like most to have a beer and chat photography with.  I think the things he’s seen, and the photographs he’s taken are out of this world, and I guess that can be taken figuratively as much as literally.  If you haven’t seen his images from space  check this out, it’s unreal! I’m on an absolute buzz here.  Photo geek out, full on. Loads more to come from Jasper, so stay tuned!