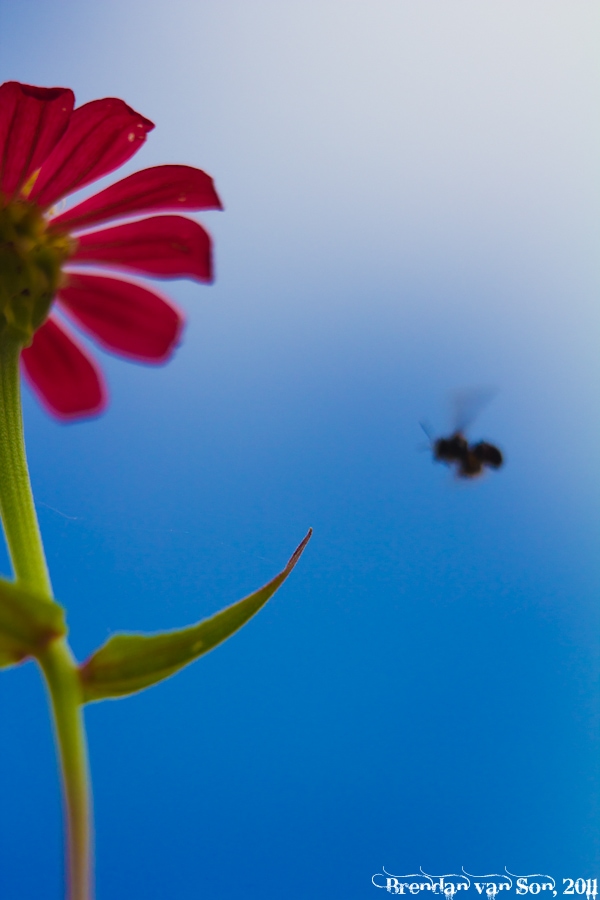 I spent the past couple of days at a place called Finca Ixobel in eastern Guatemala.  I planned on spending the time relaxing and catching up on work, but, as it is often the case, I got distracted.  The area around Finca Ixobel is full of flowers, butterflies, open fields and even some great caves and tunnels to climb around through.  I didn’t expect to take any photos while in Finca Ixobel, but I ended up nearly filling a memory card and keeping a couple dozen photos I am really happy with.  This photo was taken from lying down attempting to shoot what’s known as the worm’s eye view of the flower.  As I was setting up the composition a bee flew into the scene so I pulled the trigger a quickly as possible.

Laying on my back and using my 70-200mm f/4 lens with one extension tube attached I laid down on my back to shoot upwards on the scene.  From that position I was manually focusing the scene when the bee flew in to the picture.  Sometimes you just have to react as fast as you can and wish for luck.  I spun the focus wheel and fired a couple of shots. Although this photo isn’t exactly in the best focus it has a great atmosphere to it.  The lesson for this photo, is sometimes you just have to be lucky.