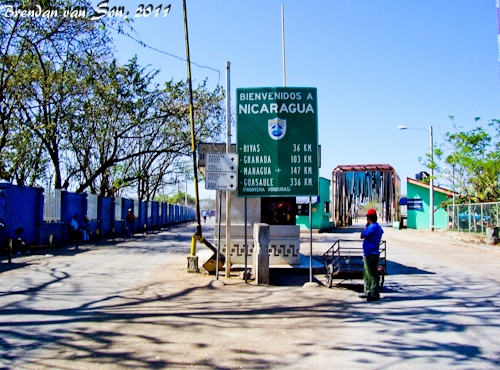 Being Shot at in Nicaragua

In the Winter of 2005 I took a semester off of University to try to find direction in my life.  I traveled to Central America, a place I knew very little about.  I fell in love with the culture, the people, and most of all the history.  Nicaragua changed me and gave me direction as a person.  I left for Central America a naive boy without a true purpose or path, and I came back a man with ambition.  So this is not just the story of how I was shot at in Nicaragua, this is the story of how I became a man.

I flipped through my faithful copy of Lonely Planet‘s “Central America on a Shoe String” guide book as the bus approached the suburbs of Managua, Nicaragua. The bus winded its way down into the valley passing by chains of McDonald’s, Pizza Hut and KFC. I looked down at the pages written about Managua to see something ever so prevalent in the text of the book “dangers and annoyances.” I thought to myself with a sly grin pasted to my cherub cheeks that if I listened to every single travel advisory that I would not have any fun. Besides, I would only be in Managua for one night before catching the bus north to San Salvador.

As I stepped off the bus and into the streets of Managua I headed in the direction of a guesthouse I was told was only four blocks away, in the part of the city I was told not to stay. With my big blue backpack tied tightly to my waist I walked the four blocks, and couldn’t help but feel the sensation that people were watching me. I had felt that way before in my travels before, but not like this. It was as if everyone was looking at me while thinking “what the hell is he doing here?”

I rang the buzzer to the guesthouse and was greeted by a short lady with plump cheeks who must have been in her sixties. She walked me through the two thickly secured doors and into what seemed to be her home. The living room was painted a dull colour of off white while crosses and photos of the virgin Mary were strung to every wall. I was led to my room, a simple quarter with a narrow single bed about 4 inches too short for me.

My stomach began to rumble around 6pm so I headed toward the outside world to find some dinner. But as my hand made contact with the front door the lady, whom I had been calling Doña (a very formal name for an older lady), stopped me.   At the time my Spanish was nowhere near fluent, but there was one word I understood clearly: peligro (danger). She told me that after dark it is very dangerous and that she would make me dinner for 2 dollars. To be honest, I kind of wondered if it was a play to make more money from me, but for 2 dollars I would gladly save myself the trip of searching for food. Besides, the lady was very sweet.

My bus out of town was set to leave at 4 in the morning, so after watching really bad Mexican telenovelas with the Doña I decided to try to get a couple hours of sleep.

My early evening sleep was broken by the sound of firecrackers outside my door, something that I had become accustomed to in Central America.  I laid in bed in boredom while constantly turning over to check my alarm clock to make sure that I didn’t miss my bus. And as the digits flipped to 330am I decided that it was time to leave.

Partially in a dream state due to a sleep constantly interrupted by firecrackers, I threw my bag on my shoulders and walked to the gates of my guesthouse fortress. I pulled the re-bar metal handle of the solid steel door with my head down trying not to make any noise. But as I peered through the door to the gate two men were looking in with AK-47s in their hands. Before I could realize that they were wearing military fatigues I slammed the door shut, forgetting about my desire to maintain quiet.

The Doña came racing out of her room in her nightgown to see what was wrong as I explained in frazzled Spanish that there were men with guns at the door and I needed to get to the bus. She explained to me calmly that the men were there for me, they were going to escort me to the bus station. She explained to me that there was some sort of fight going on between the police/military and a drug cartel in the neighbourhood. It was at this point that I realized the firecrackers I thought I was hearing all night were actually gun shots.

My tired senses were shaken free as adrenaline sharpened my attention. We made our way down the street and arrived at the first intersection where the solider, who in the dark street lights looked only to be about 15 years old, placed his hand on my chest as a warning to stop. The other officer pulled a whistle strung to his hat and blew creating a high pitch ring that shot through the tense night air. Within a second or two a reciprocal whistle could be heard from up the road, and upon hearing it we crossed. At the second road the same procedure was followed, and as we heard the whistle we all breathed a sigh and crossed. However, at the third intersection our whistle received no reply.

The guard scanned the scene with a slight hint of fear in his eyes before again blowing his whistle. I will never forget the sound I heard next: a whistle. But not the whistle from a plastic noise maker but the whistling sound of a bullet flying past my ear before crashing into the soft cement wall of the street store behind us.

“Corre!” yelled the guard in the front as the solider in the back grabbed the back of my head pushing it down towards the ground. We sprinted awkwardly across the street while the sound of ricocheting bullets bounced from the paved street. As we sprinted across the intersection we could still hear shots being fired, but no longer saw the dust dramatically jump from the ground around us as they missed our scrabbling feet.

Although the danger seemed averted we continued to run the last two blocks, and even I was carrying 15 kilos of weight on my back and another small bag in my right hand, I have never run that fast in my life. We arrived at the gates of the private bus terminal and I walked in to the faces of a dozen or so people who were carrying on their morning like nothing was happening. On the street an older lady was selling breakfast and coffee. I went to the counter to find out when the bus was going to be ready to load, when I realized that I hadn’t thanked the guards who risked their lives to keep me safe, but as I went back to the main doors I realized that they had already left.

Covered in sweat I stepped onto my bus, found my seat and sat down. Before the bus had even left the station I feel asleep in complete exhaustion. I woke up to see the sun rising over the dry Nicarguan countryside only remembering what had happen after a couple  moments free of thoughts. It was as if it had been a as clear and foggy as a newly acquired dream, too unreal to have happened.

“Wow, what a dream.” I thought to myself with a bit of a smile on my face.

But reality set in and I realized that I did not remember walking to the bus station. Did that actually happen?  My mind raced as I begin to physically look for clues.  I frantically check myself for cuts, bruises or any other wounds. I grab my daypack which had been in my hand as I walked to the station and examined it. On the bottom of my black Nike bag which I had been using since my senior year in high school I find a small tear on the very bottom that I had never seen before, and as I open it to examine the contents I notice a rip in the bottom of my leather three ringed binder as well.

Snapped from the muffled shock that it had all been a dream my heart sinks as I realize that it actually happened, and although the tear on my bag might have been from scrapping it on the ground as I ran, it also very well may have come from a bullet which hit it as the bag swayed in front of me as I ran.

I looked around at the half full bus, and as everyone lay sleeping my mouth could no longer contain my tongue’s words as I murmur loudly :“Holy shit!”

I stared out the window in calm as my heart raced in its recollection of the events of the morning, one that seemed too unreal to have happened. But I never really felt fear for myself at that point. My thoughts were with the guards that brought me there that day. They would be there still, they may get hurt, or worse. And what happened to the guy who should have blown the whistle to give us clearance to cross the intersection before we got shot at? Was he shot?

I studied 5 years worth of Political Science specializing in conflict resolution and political violence, and I still haven’t a clue what causes a people to wage war. And as I sit here in Colombia today, a country that has been riddled by conflict over the years, I know that I have an opportunity to dig a little deeper than my textbooks would allow. Travel has given me the opportunity to better understand the world, and that is something that I’ll always be grateful for and it is an opportunity that I do not take for granted.