On the morning I spent racing around Caye Caulker shooting photos before the sun came up I noticed that there was a theme of the morning: the colour blue. Early in the morning very dark blues made the sea scene look sad and cold but as the light began to life the mood seemed to as well. The Blue Island supermarket that morning in Caye Caulker, Belize, and everything that surrounded it glowed in the bright colour of blue. This was one scene I did not have to work hard to create, and really stumbled upon. It is one of my favourite shots of the morning. 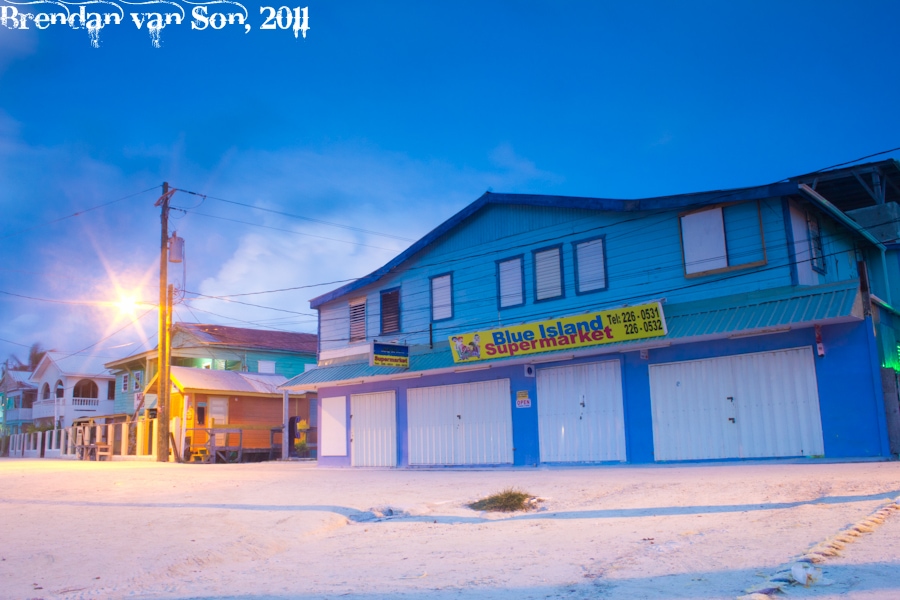 The Blue Island Supermarket photo from Caye Caulker was more luck than anything, but it proves the following point: never get too focused on a shot or a scene.  Sometimes we get so focused on getting a certain photo that we lose sight of the bigger picture.  I had set out to shoot some seascapes on the beach and off of the piers and got some amazing shots.  But even as I was shooting them I had my head spinning around waiting for the 20-30 second exposures to finish looking for my next shot.  We can spend hours trying to get the perfect shot on a great composition or we can get dozens of great photos and great compositions by shooting and moving.  Of course experience will help you get a great shot quickly, but it is also planning.  Think about the places you want to shoot and work out a plan of action for your photos.  For this shot, I was walking off the pier when I was struck by this scene.  I may have been trying to shoot seascapes, but how could I not take this shot???

For the photographers out there this photo was taken at a 30 second exposure at 18mm with an f-stop of 22 so I could get a star from that street light.