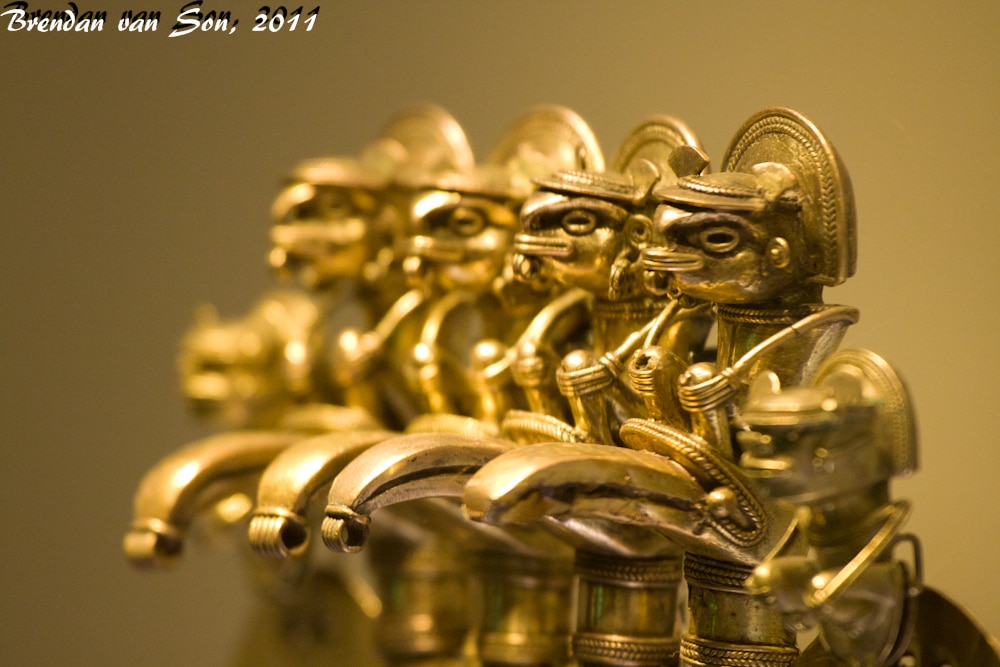 Brendan van SonJune 17, 201193 views
PhotographyTravel Photography Blog3 Comments93 views 0
Take a historical article and mix it with a photo essay and that’s what you have here.  This was one of the best museums I have visited for the simple reason that it brought to life much of the history that I had previously only read about in books.  Below you will find blurbs inter-spaced with photos from the museum.  I hope you enjoy this photo essay as much as I have enjoyed putting it together. All images have been shrunk, to see the 1000 pixel version simply click the photo.

The Americas were discovered on the back’s of a desire to spread Christianity to the unconverted world. Christopher Columbus finally got approval for his voyage after convincing Queen Isabella, still very high off the reconquista of Muslin territories in Southern Iberia, that their duty as Christians was not yet over. That being said, what drove the exploration of the interior of South America wasn’t religion ideal, but material desires, which were found in abundance. 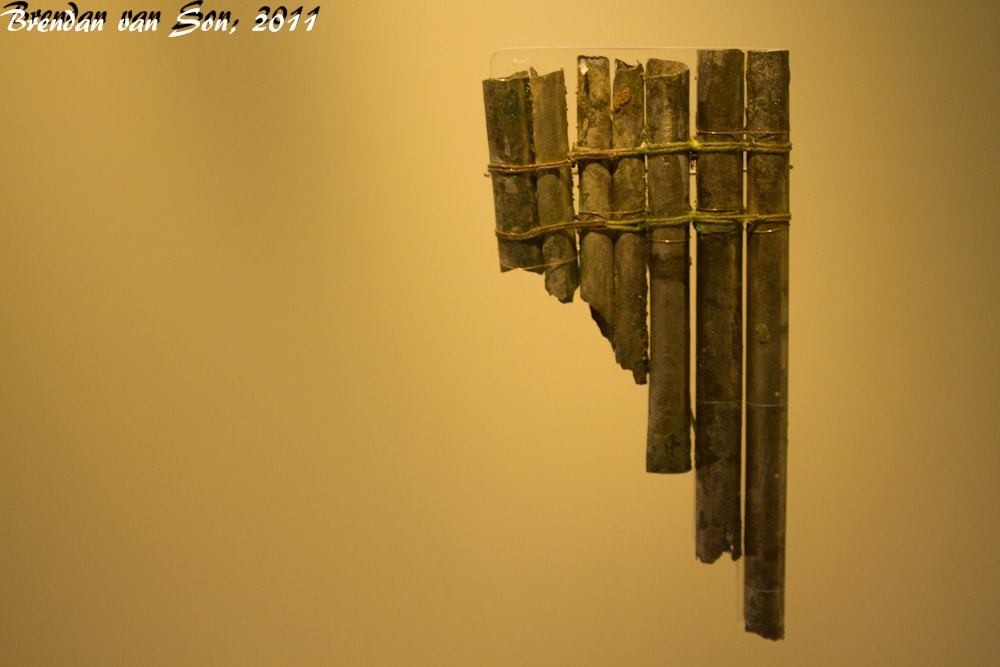 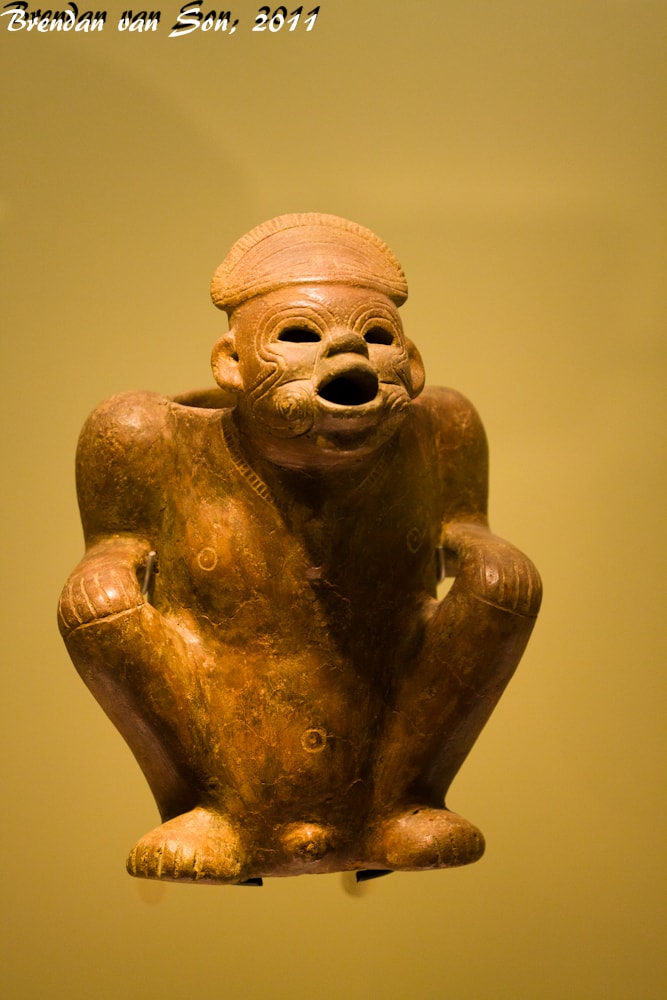 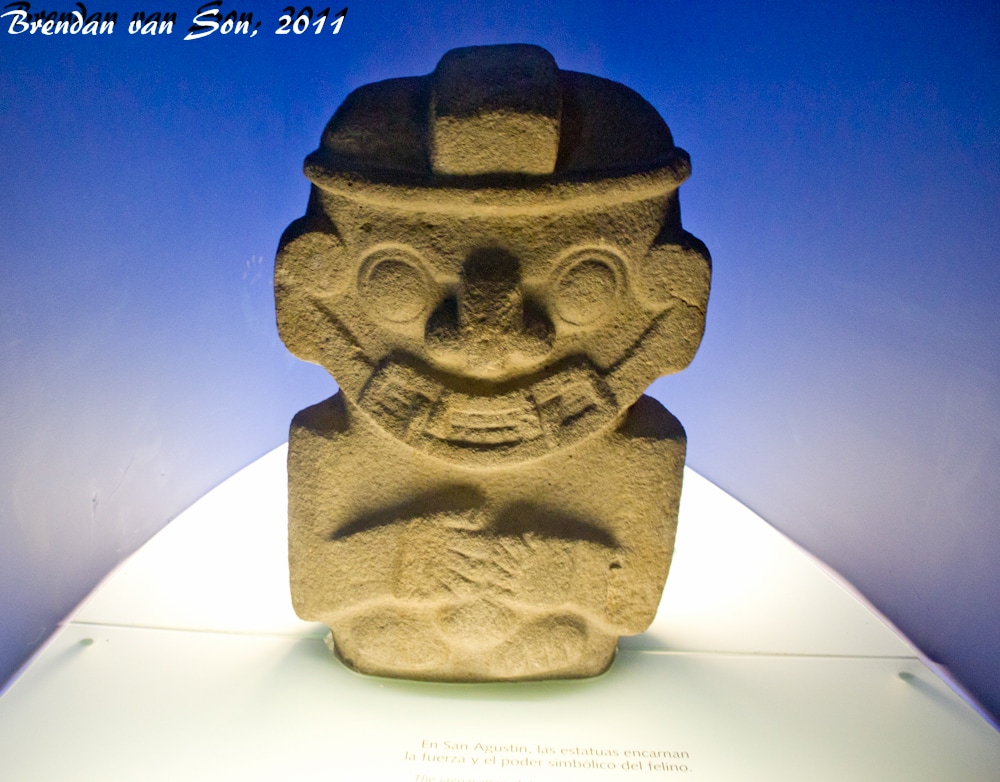 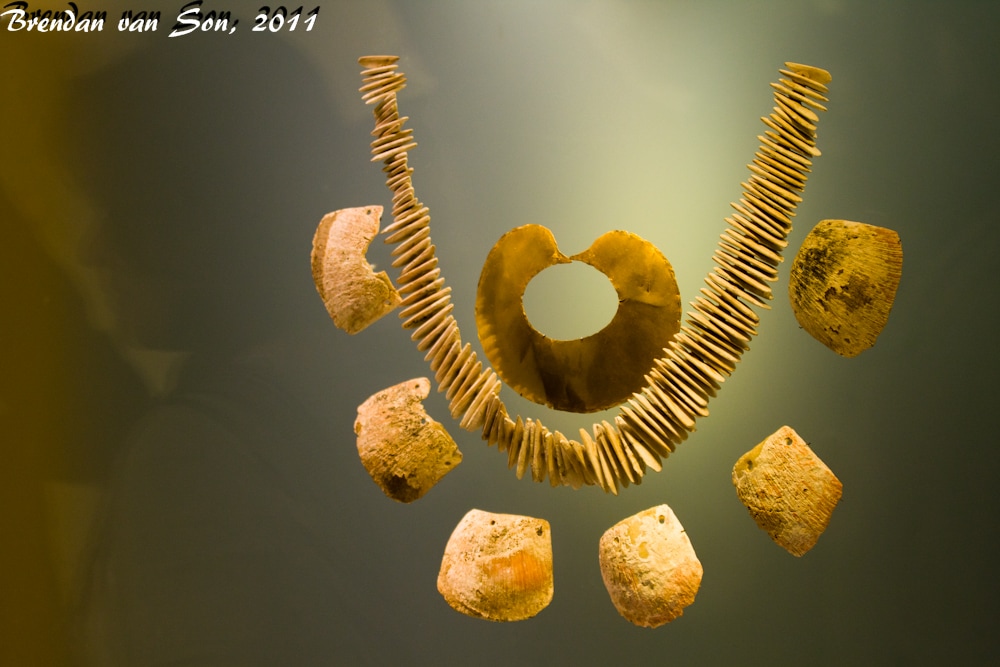 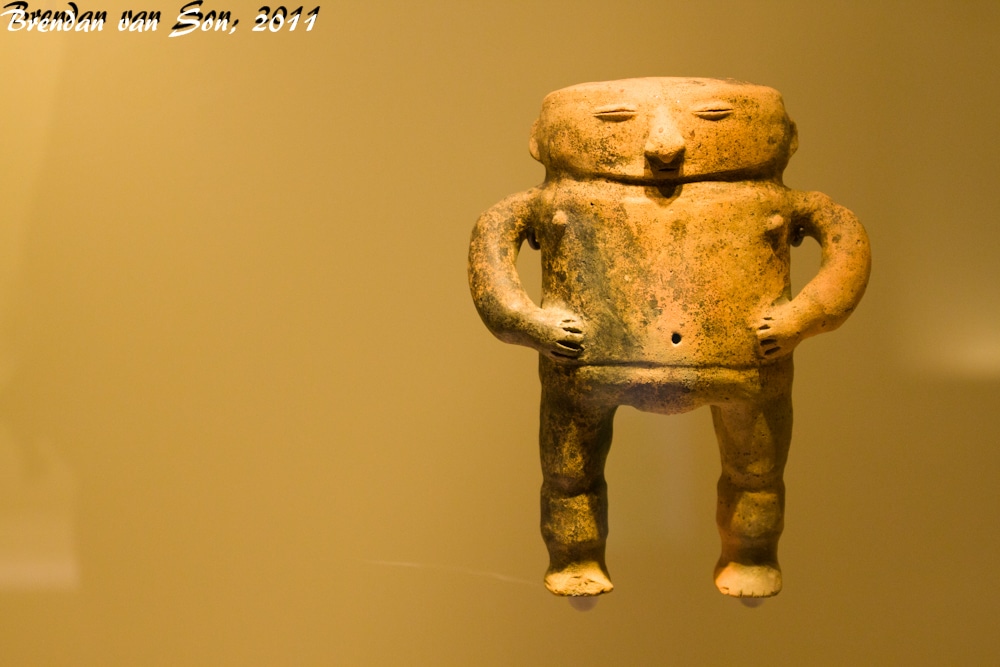 As Francisco Pizarro’s men finished cleaning the Inca people of their riches in the form of gold and silver, their appetite for wealth could not be satisfied. Stories of a golden city they called El Dorado began to surface amongst the conquistadores. The rumour began to surface within the ranks of the Spanish that when the faction of Inca royalty found in the area of modern day Quito, Ecuador learned of the Spanish desires to rid them of their golden treasures they ordered the gold to be hidden in the jungle where the Spanish had yet to venture. 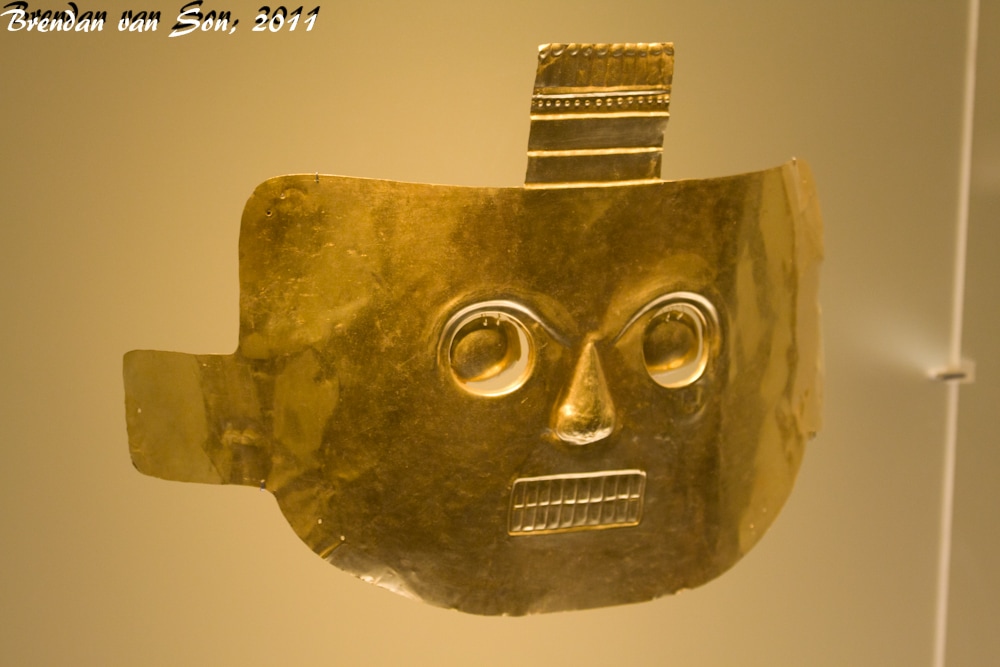 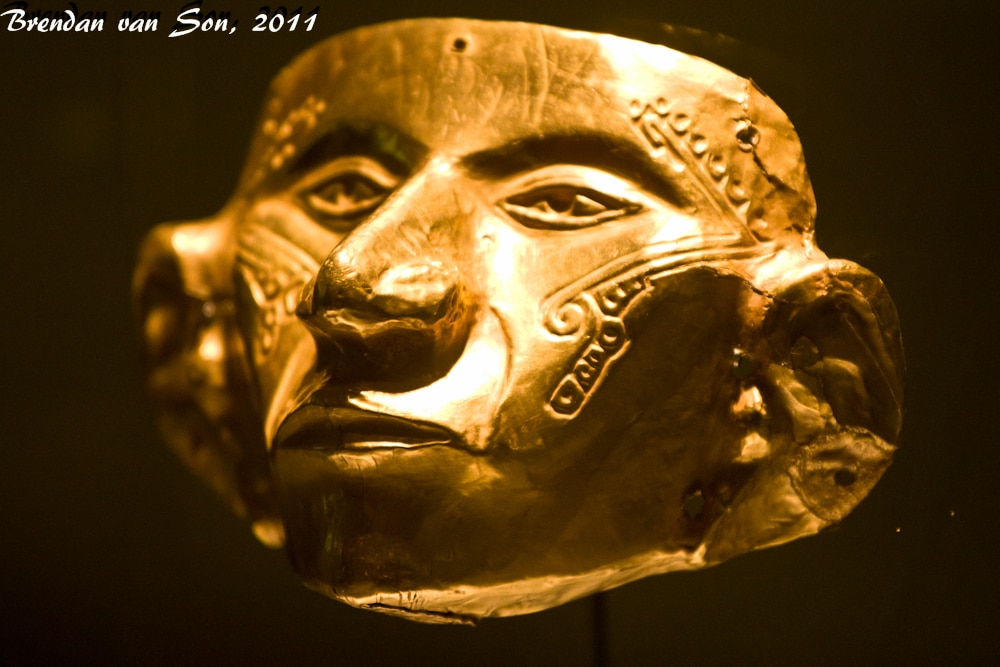 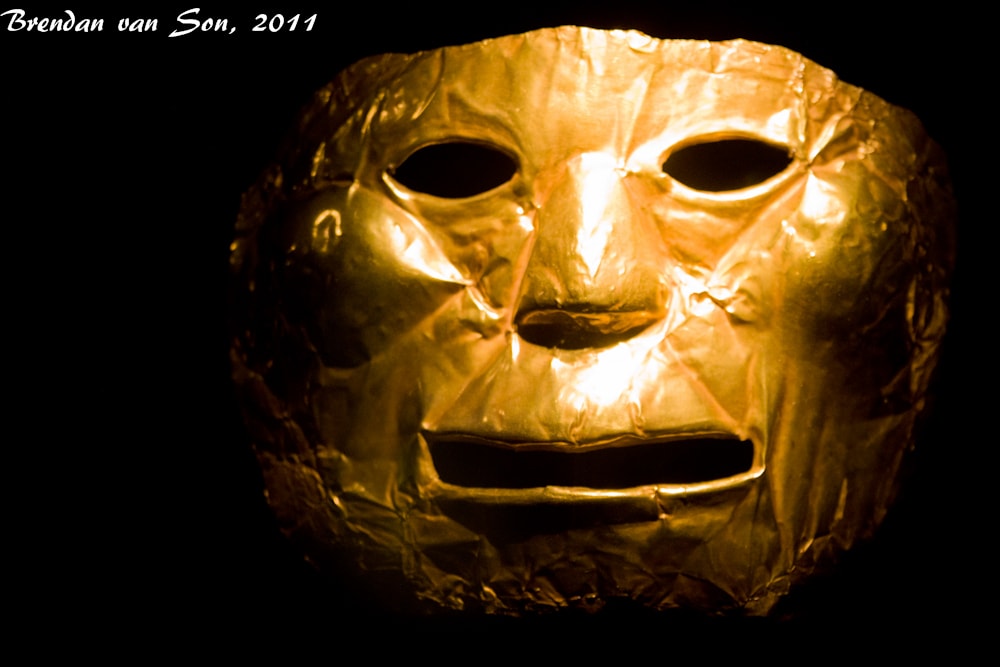 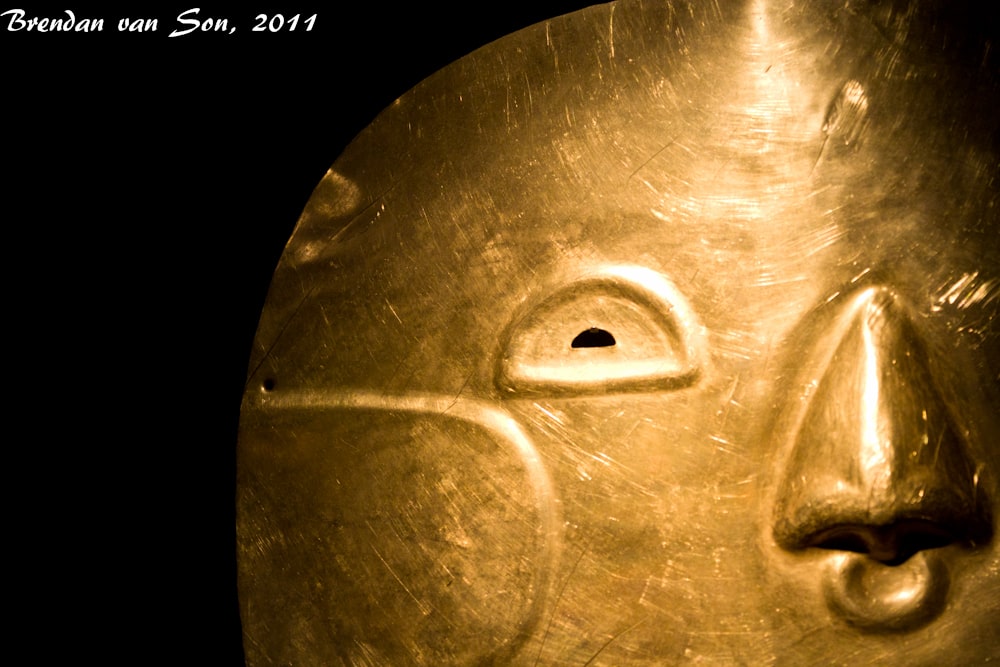 Another mask of gold 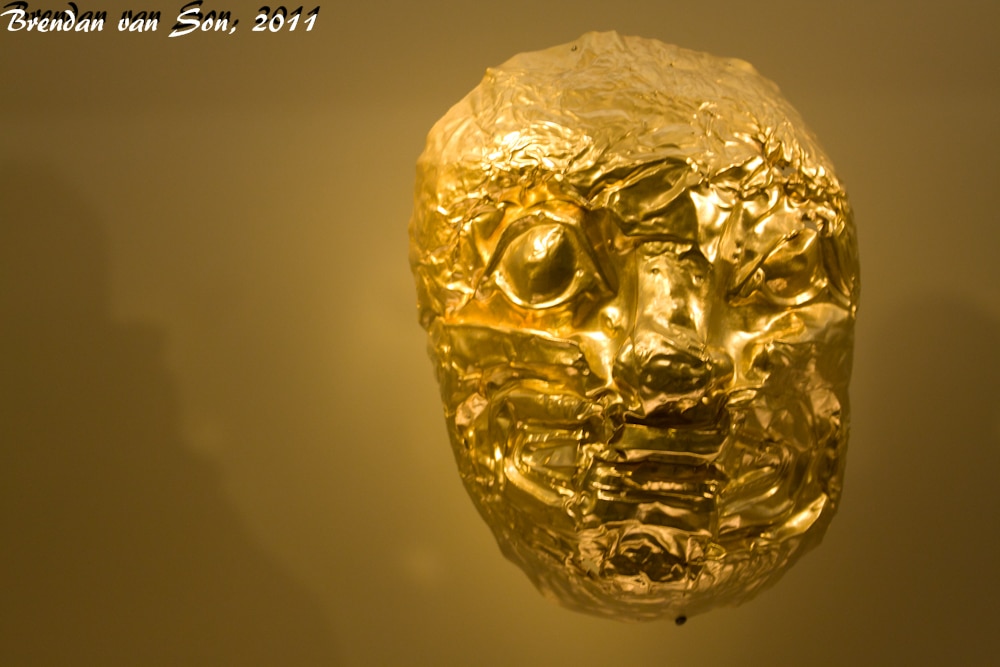 One of the oldest of the masks, very high quality gold

Many different stories began to surface about this hidden stash of gold. Some believe that the gold actually came from what is now known as Cuenca, Ecuador.  Cuenca was said to be a project by the Inca faction from the north who planned to build Cuenca up to rival the city of Cuzco in both stature and beauty. When the Spanish arrived, the city was basically a ghost town that looked stripped of its wealth.  Those who believe this story feel that the treasures were taken over the highlands of Ecuador to be hidden somewhere in the dense jungles. Many explorations have been made since the early days of the conquest. Francisco Pizzaro’s own brother was a part of the first venture, which never found gold, but did discover much of the Amazon Basin. 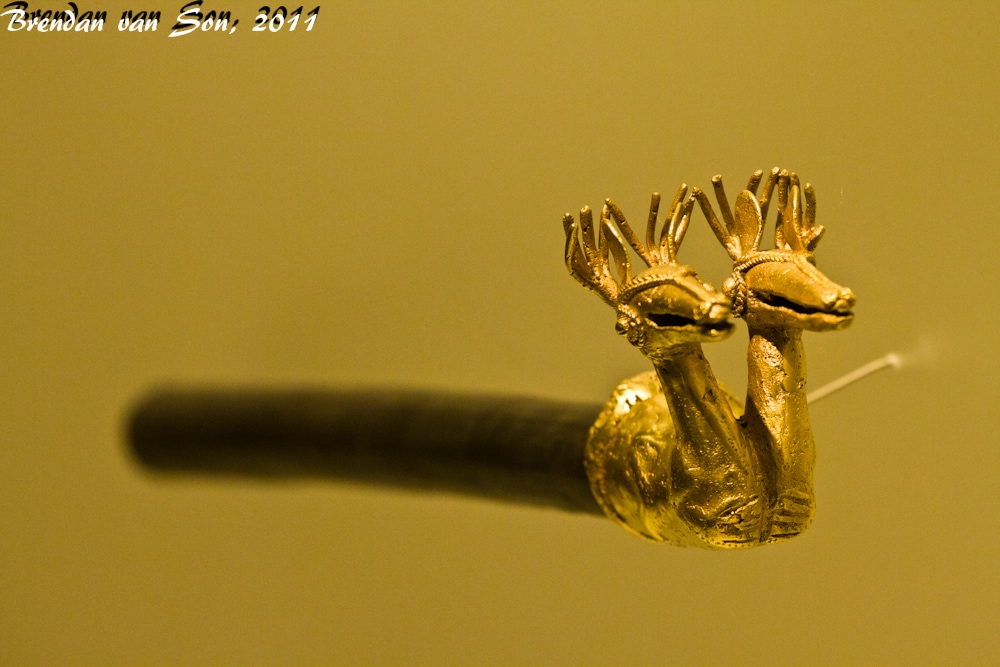 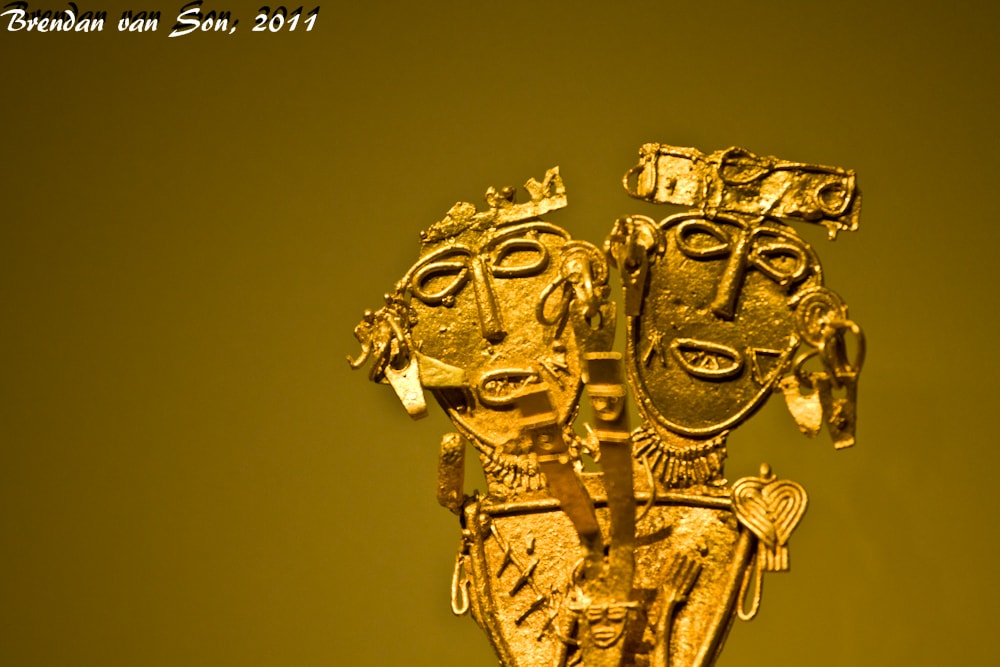 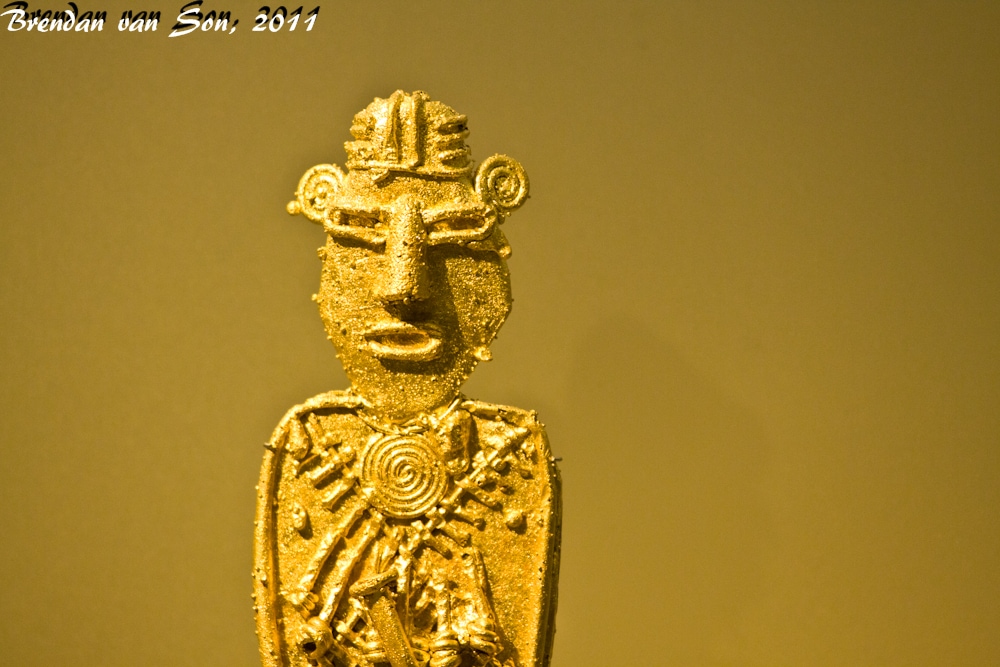 This golden figuring was about 7cm tall 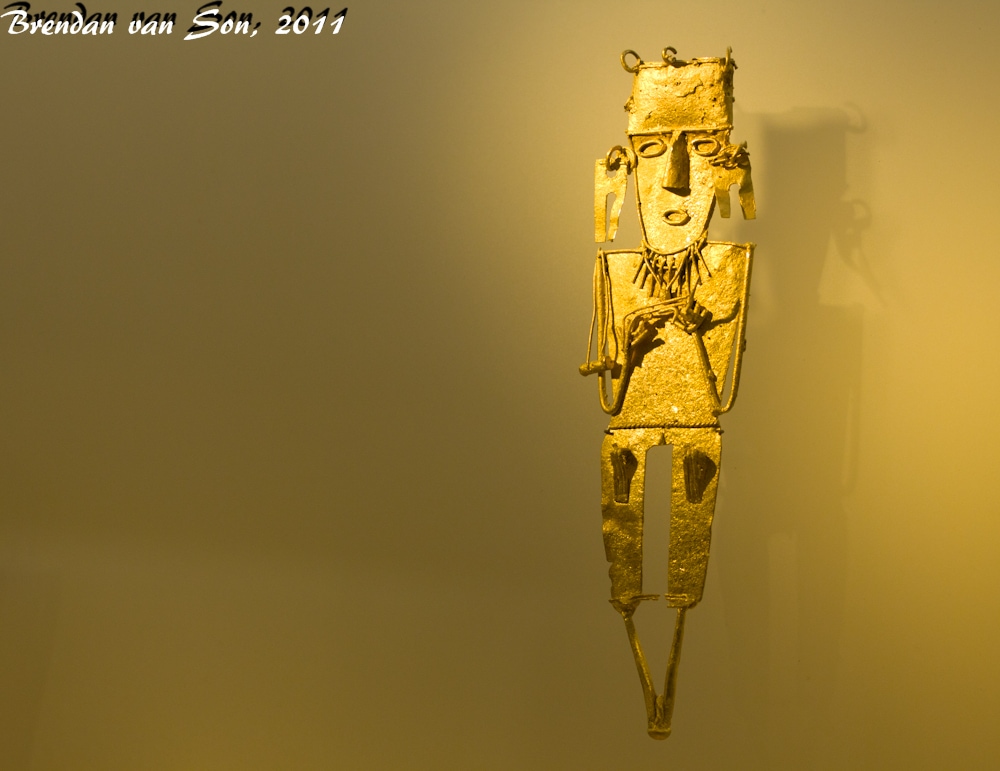 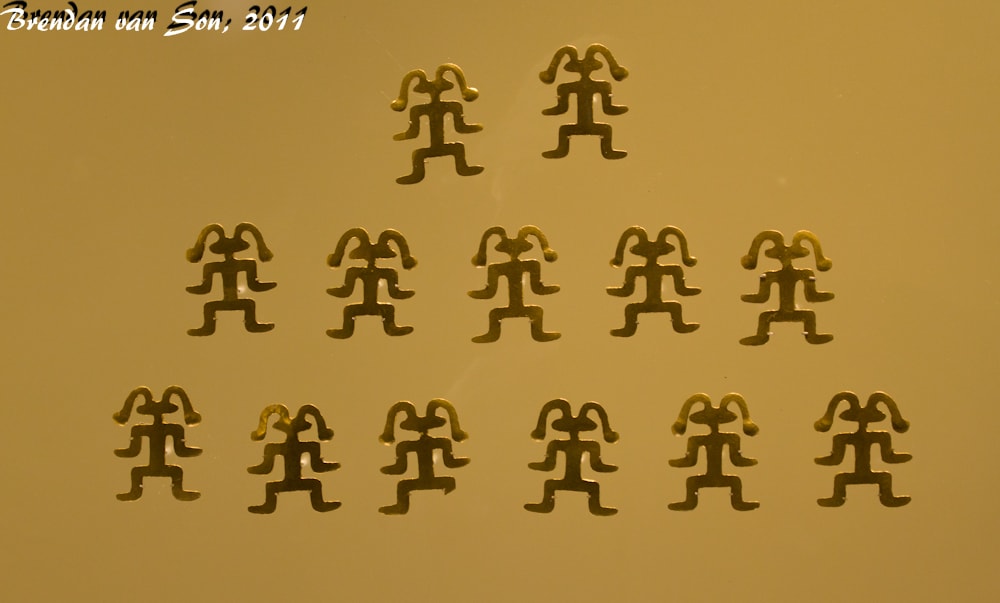 A wall of golden pieces 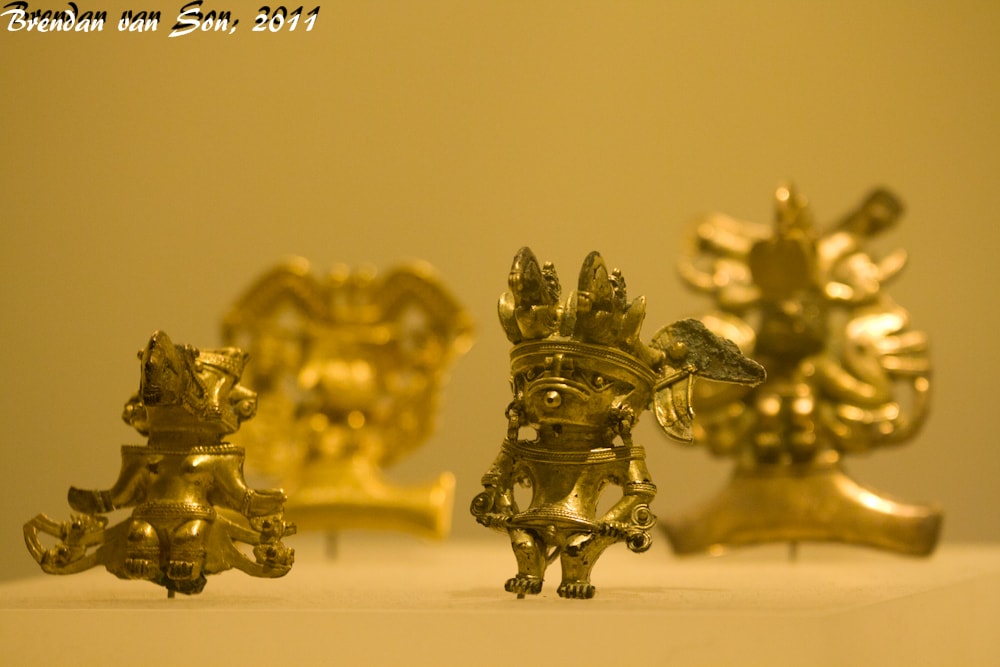 To this day expeditions into the jungles of Colombia still take place quite regularly. And I’m sure the thought of finding an empire’s worth of gold will continue to push explorers with golden ambitions to hack their way through the thick Amazon Basin in its search. There are some, however, that believe that the stories of El Dorado were tall tales told by the Inca in hopes that the Spanish would leave them alone and head into the treacherous Amazon. Regardless of what you believe, on thing can’t be argued: golden city or not there was a whole lot of gold found in Colombia, and much of it is now found within the secure walls of Bogota’s Museo de Oro. 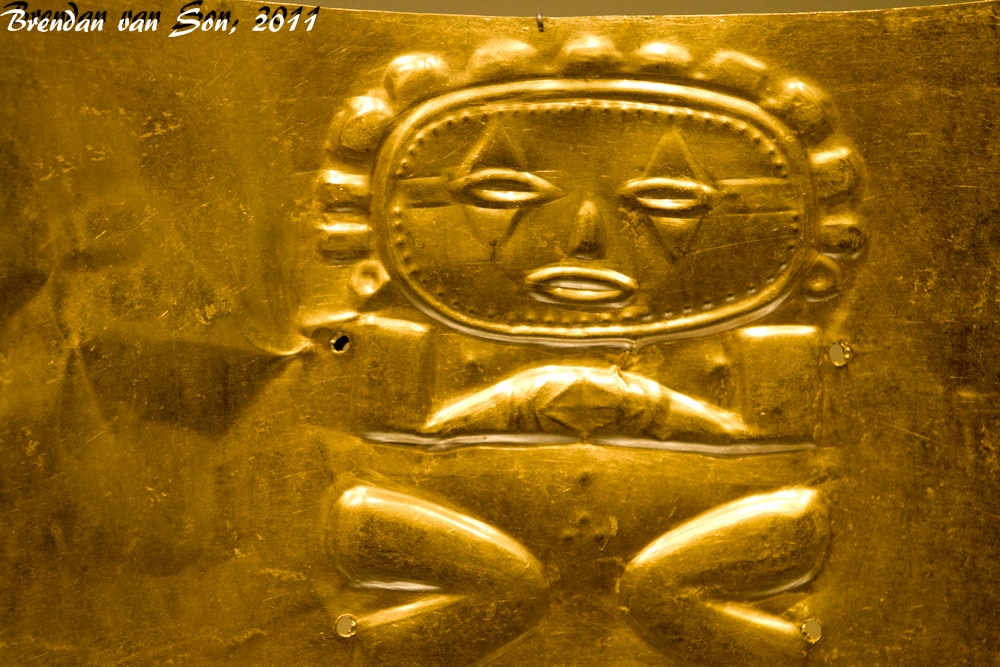 Figure on a gold braclet 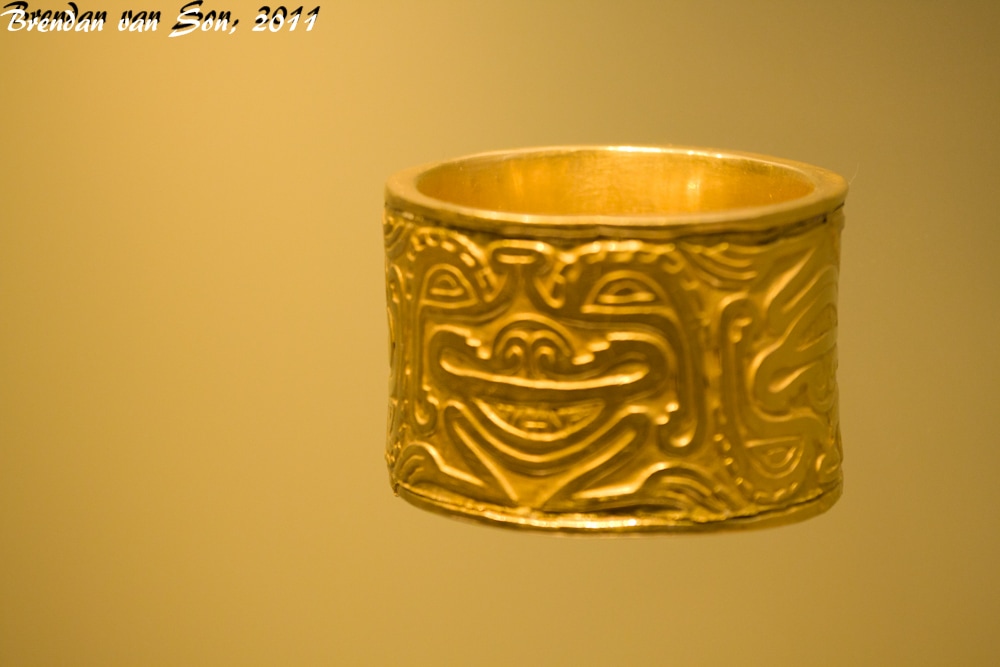 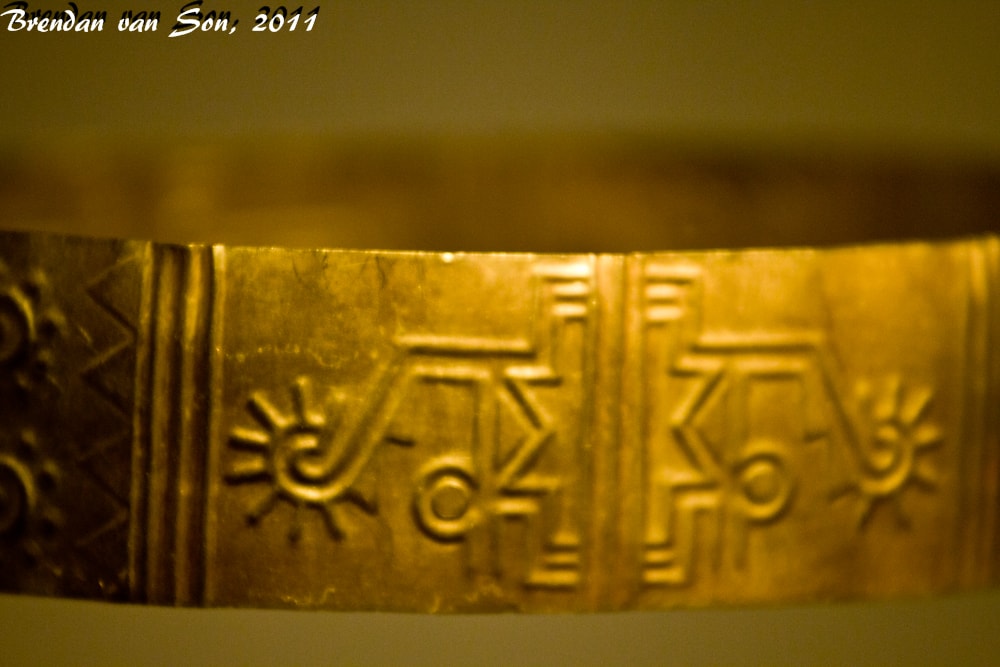 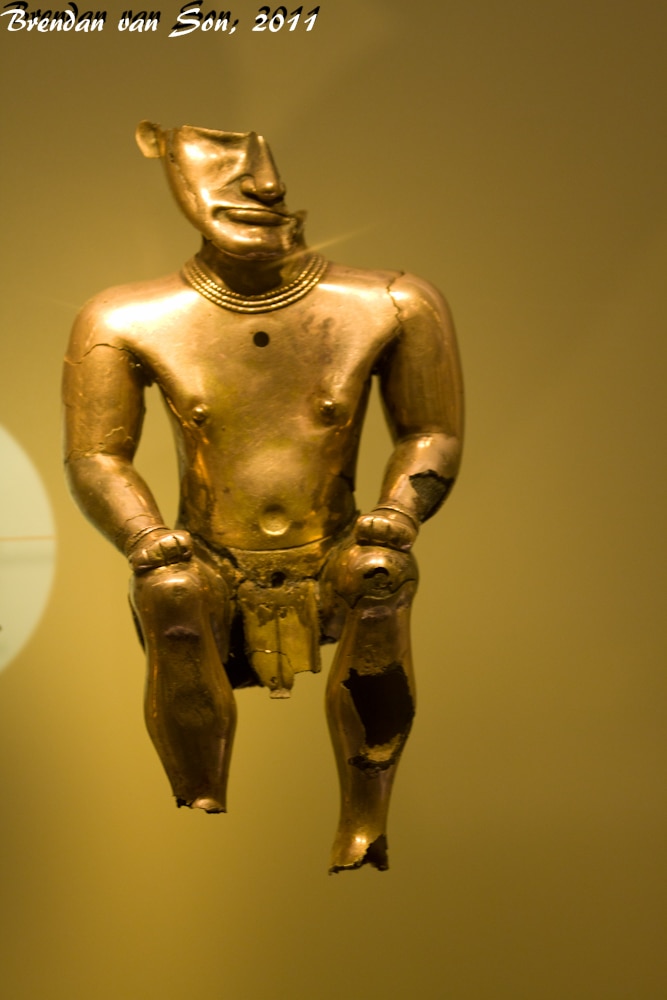 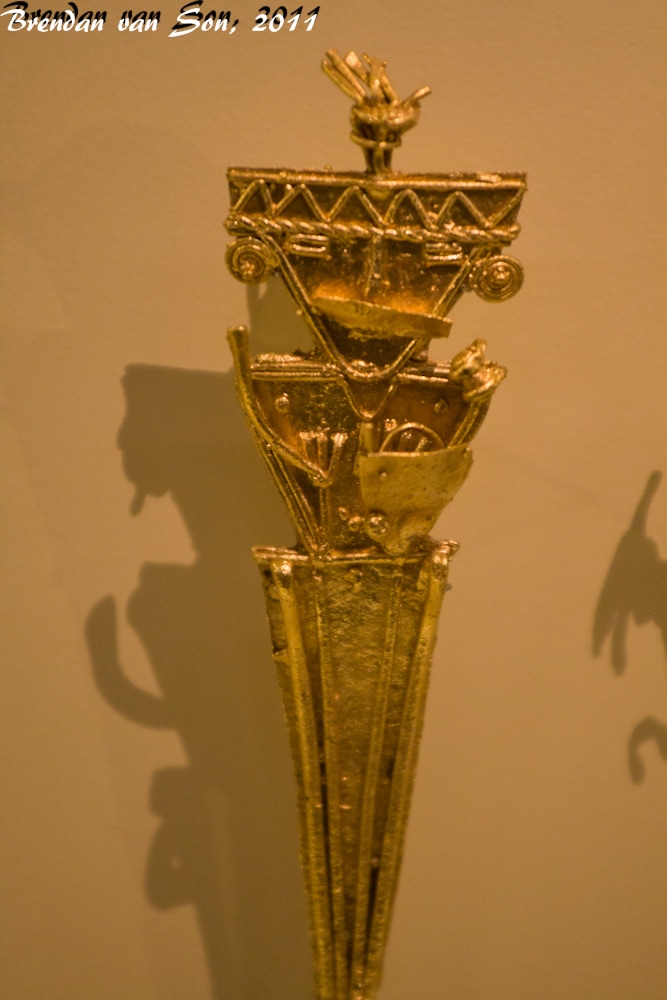 The “Gold Museum” in Bogota may be the most important pre-Colombian museum in all of South America. The artifacts that have been found in the country give light to the way of life before the Spanish Conquistadores imposed their will on the country. The art depicts the clothing worn, the dress, cultural ceremonies preformed, crops grown, and so much more. If you’re even in Bogota, don’t miss a glimpse into the past of this amazing country via the Museo de Oro.