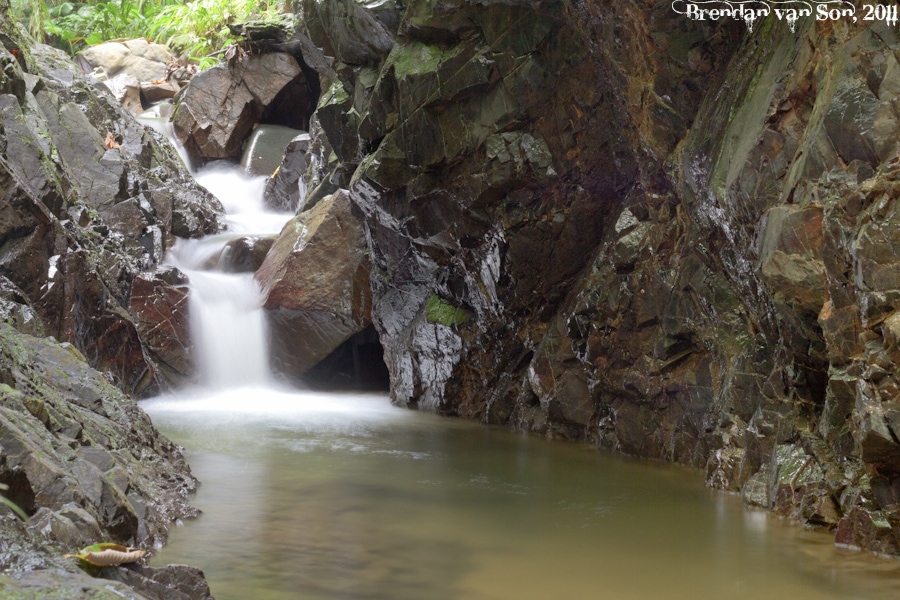 On my trip from Panama to Colombia overland I stopped in at a town called Capurgana.  The town has long since been known among Colombians as a potential vacation destination; a Caribbean destination that doesn’t have the high costs of San Andres and Providencia.  However, among foreigners and locals alike this area has long since been seen as too dangerous among most to travel.  Capurgana sits on the Caribbean Coast of the infamous Darien Jungle, a hiding spot for Guerrillas and a traffic route for narco-traffickers.  As such, nearly all foreign travellers have avoided the area worried that the dangers far outweigh the rewards.  However, things are starting to change. Tourists have started coming, and not just Colombians but also foreigners.  I will be putting together a more in depth article on the area quite soon.

The photo below was taken on a 2 hour hike into the Darien jungle.  I was hiking my way to a waterfall called El Cielo, but to get there I had to cross a river about fourteen times.  At one point a part of the river split through this rock wall and created this great scene for me to photograph.

The trick to this shot is all about stabilization.  I don’t know what I was thinking, but I decided to leave my tripod at home for this hike with the thought in mind that I could get enough stabilization from my monopod.  After a couple photos here at this scene I couldn’t get the sharpness to the image I wanted, and the scene was darker than I expected.  Luckily, I know that you don’t need a tripod to stabilize your camera.  At different points in time I’ve used fence posts, tables, and even tree limbs to set my camera on.  When hiking you have a great stabilizing device right on your back, your backpack.  For this shot I took the pack off my back and set it on the rocks.  The beauty of using the backpack as a stabilizer is that it is soft enough that you can manipulate it like a tripod.  If you see a great scene, but don’t have a tripod scan the area, and your belongings, for something to use as a replacement.