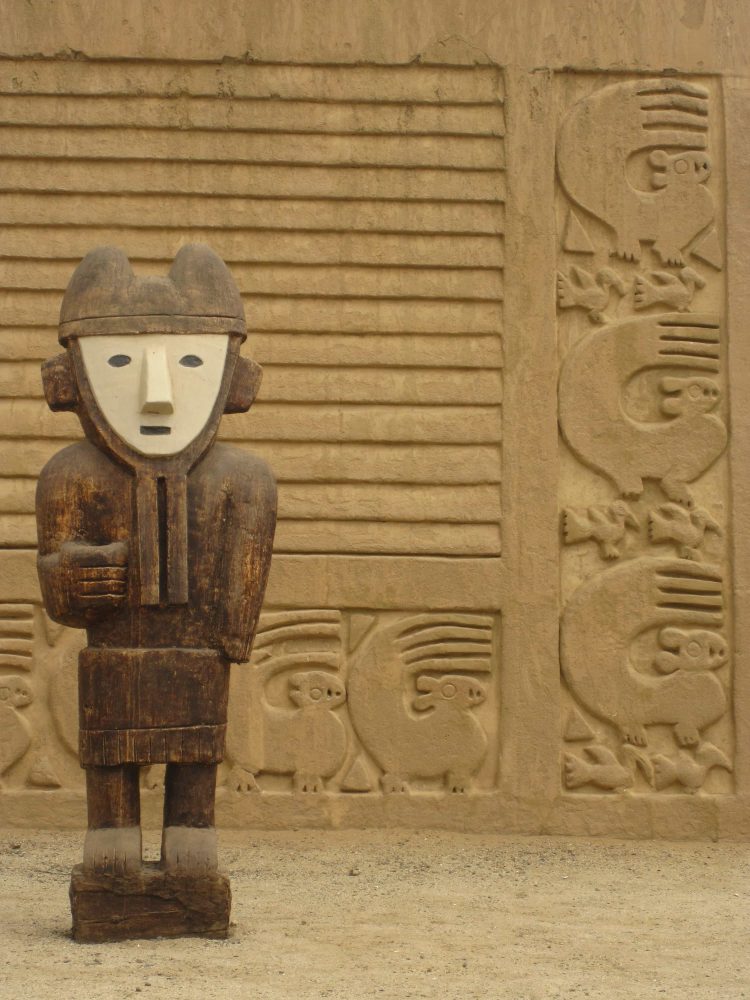 Most people visit Peru to see Machu Pichu, and rightfully so, Machu Picchu is one of the most impressive sites in the entire world. The usual route of travel for exploring Peru, while highlighting Machu Picchu, is to travel from Lima to La Paz. However, those who explore this well beaten route of travelers will miss out on two of the most impressive sites in all of Peru: the Chan Chan ruins, and the Huaca de la Luna Temple.

The dry Chan Chan ruins are the largest adobe city in the whole of South America. They sit contrastingly alongside the crashing waves of the pacific ocean in between the city of Trujillo and the beach resort town of Huanchaco. The site encompasses an area of around 20 square kilometres, and, to be quite honest, in many sections looks like nothing more than pills of insignificant orange sand. However, the most well preserved temple, one of the youngest temples, has been well preserved and restored tastefully.

The outer temple walls tower in an A-shape figure to heights of 10-15 meters, and are impressive in themselves. However, the truly impressive features are found after passing through the one single entrance to the temple. The inner walls are lined with different patterns and figures giving light to the important elements of life in this pre-Inca society known as the Chimu culture. The walls are carved with figures of squirrels, fish, sea birds, and lines which are meant to resemble the waves of the ocean, all of which represent their respect and, in this dead-dry climate, their knowledge that the sea and it’s inhabitants are what will breath them life.

Inside the walls of Chan Chan there are diamond shaped sand fences, which are meant to represent fish nets, and a wide variety of figures. The sheer scale of this site is more than likely enough to leave you impressed, but it’s the intricate precision that was put into the aesthetics of this sand city that will have you blown away.

Huaca de la Luna (the temple of the moon) is the least known of these two nearby sites. It belonged to the Moche people who graced the coast lines of Peru before the Chimu, well before the Inca society was even a twinkle in Manco Capac’s eye. Like Chan Chan, from the outside, the site looks like

nothing more than a hill of vicariously piled sand and stone. But once you dip down into the mouth of this large temple you quickly begin to understand the draw. The temple walls are lined with nearly perfectly preserved paintings laden with colours of red, blue and yellow. The most famous images depict the terrifying looking god that they pledged their love, and probably their fear, to. Other layers of images show fierce warriors carrying the heads of their defeated, as well as images of snakes, birds and various other animals.

Maybe the most exciting part of the Huaca de la Luna lies within the eyesight of visitors to the top of the temple as they look out from the view point. As viewers look out across the desert floor they can see

the Huaca del sol, the largest pyramid in South America. The exciting part of this site is that, to this date, it is still untouched. To this day the temple remains solidly filled with loose sand. It is very much a possibility that within this still sand-filled pile of dirt resides different art, different shrines and, maybe most importantly, different clues and descriptions of the ways of life of these ancient Peruvian people.

Chan Chan is being threatened by coastal rains that could wash it away, if they ever got a serious rain. Huaca la Luna too could easily be lost to the winds of the world, or collapse upon itself. These are sites that should be on your list of things to see before they are either lost to the elements of nature, or overrun with people as thrilled to discover this site as they are to have discovered Machu Picchu. In any regard, it seems that visitors right now are just thrilled to have it all to themselves. And as selfish as it might be, they grin wide as they take pictures without worrying about others wandering in front of their shots.