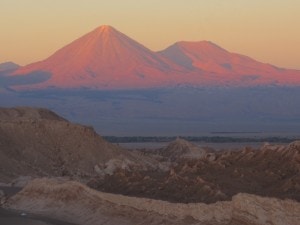 One step into the World’s driest desert will leave you beyond awe and rather wondering if you’ve left the Earth’s surface. The cartoon-like Valley of the Moon, in Chile’s Atacama Desert, is sure to leave you wondering if you’ve stepped into a wild desert chase between Wiley Coyote and the ever elusive Road Runner. The valley is lined with sharp sandstone cliffs topped by vicariously hanging ledges of sheet like rock. The valley itself is wrinkled with jagged triangular pillars of which, to the creative eye, resemble the outer back spine of a dinosaur. The Valley of the Moon is sure to draw the most cynical observer into a calm state of insignificance.

The obvious draw of the desert, it seems, refers to the absolute desolation of its presence. It is one of those places in our world that will leave visitors standing in a 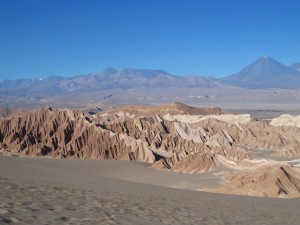 sheer state of insignificance and wonder. The Atacama is so quiet that visitor can feel embarrassed to make the most subtle of sounds. Its silent awe can have its intruders speaking in whispers as if to not to disturb its silent haven. The peaceful calm of this arid scene can even cause many to hold their breath, nervous about breaking its divine serenity.

This parched landscape, described by large moon-like craters and tall columns, that resemble mummified people encased in sand, inspires guests to suck in its thin dry air hoping to encapsulate deep in their lungs the warm feelings offered by the desert. One of the amazing things about this spot is that, although it is one of the World’s most bleak and barren places, no matter how deep within the valley one travels signs of life still exist. Biscotchas, rabbit like animals crawl through the rock formations in order to find refuge from the constant flame of the sun. Vicunas and 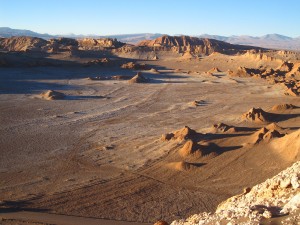 Guanacos, the rare South American members of the camelid family, also graze this vast dry land in search of small patches of green moss that determinedly grows on the rocks, or anything that it can find to fill the deep holes in their stomachs. And, yes, there are even real live Road Runners that scamper their way across the arid sand floor. The desert, in many ways, finds a way to breath despite its raw and bleak nature.

The valley is best visited during the early evening, not only to avoid its powerful sun, but because as the sun settles itself behind the volcanoes that provide the scenic backdrop the desert blushes into a number of deep colours. The desert’s fine soil reflects an iridescent spectrum of colours from blue, purple, yellow, red, and green. The billowing clouds, that seem to always sit and watch from a distance but

never truly threaten, mirror the desert’s bright shades. For a place that can seem so monotonous during the day, in the evening time the desert glows a rainbow’s worth of colour. As the sun sets behind the high wall of sand that the locals have aptly named “The Big Dune” visitor to the valley expecting a sunset, and are instead treated to a light show.

Just a fifteen minute drive from the dusty town of San Pedro de Atacama sits this treasure in the middle of the driest place on earth. This place teems with ambiance and character, and can leave you staring out with a nostalgic eye at the Looney Tunes scenery that is presented in front of you. As you are drawn back to reality you are thrown into the fact that you are standing in the middle of the driest place on the planet. You are, in the middle of this place, not only insignificant, but a needle in a hay stack; a pebble amongst an infinite amount of grains. However, in this case, you 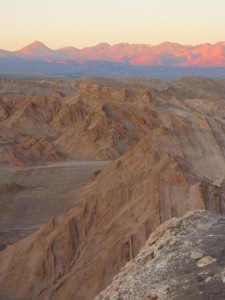 do not feel depressed by your insignificance, but in awe of the size and magnitude of our wondrous world.

The World is my Jungle Gym