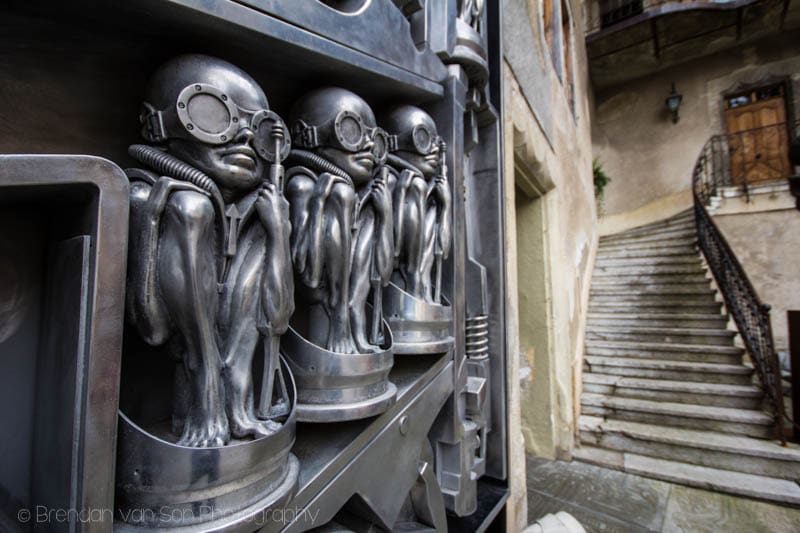 Cheese, Castles and Aliens: On Location in Gruyeres, Switzerland

Gruyeres is much like any medieval village in Switzerland.  It’s cobble-stoned, there’s a castle, there are lots of fondue eating tourists, and there’s an “Alien” bar.  Err, OK maybe the last bit is a bit unique, and it’s the reason I decided to make a day trip out to the town in the French-speaking region of Switzerland.  In 1998, H.R. Giger – the Academy Award winning artist behind the Alien Movies – bought a castle in Gruyeres and turned it into a museum and gallery of his work as well as his private collection.  Across the street from the museum there is also an “Alien Bar” which was designed under close supervision by Giger.  The alien bar in Gruyeres is one of two of Giger’s Alien-themed bars in Switzerland with the other being in Chur.

Anyways, the day went the way you can expect any day to go as a tourist in Switzerland.  We explored a castle, devoured a fondue, visited a cheese factory, and then had an afternoon drink a midst the aliens.  The trip wasn’t exactly tailor-made for travel photography, but I did what I could.

Check out my “On Location” video for a glimpse into the day.  Also, there’s information on Gruyere below.

Most people come to Gruyeres on day trips from other places in Switzerland, as we did.  Coming from Bern, it’s about a 45 minute drive; from Geneva it’s about an hour and a half.  You can also catch the train from Bern to Gruyeres by heading to the nearby town of Bulle and then swapping trains for the final stretch.  If you’re driving, there is free parking all over Gruyeres which is great considering the high cost of parking elsewhere in Switzerland.

What to do on a Day Trip to Gruyeres

Although I think we might have spent a little bit longer in town than most tourists, we pretty much did the same things all the others do.  The stuff we did is all listed below:

Though we were shooting in the middle of the day, we had some fun shooting in Gruyeres.  Obviously, things would have been easier in better light.  But, I can’t really complain too much.  Here are some of the shots.

Since I’m back in the Western World for the first time in ages, I have a bunch of new photography gear.  Thus, there will be a bunch of gear reviews over the next little while.  The first of those reviews will be of a product called Trigger Trap which is a remote for my DSLR.  I’ll be using it to do a timelapse of Lucerne.  It should be fun, so stay tuned for that!