I had the chance a short while ago to visit a city I know a lot about. In a university course on urbanization I studied Curitiba, Brazil at length for a project on sustainable cities. Curitiba is an amazing city, and it’s always fun to visit a place that you’ve learned so much about in advance. My excuse for traveling has never really changed, and may never change. Through university I studied in depth the history, politics, and human geography of the developing world (specializing in Latin America), and after learning of the world through books I decided that I also wanted to learn about it in person, through my own eyes.

Sustainable Curitiba is a leader urban development, and a model to most urban planners around the world. It has followed a model that Buenos Aires could probably use to their advantage (see article on “dirty Buenos Aires“). This city is proof that the so called developing world doesn’t need to wait on change, but rather that it can initiate it. 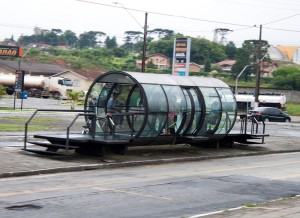 The foundation of this city’s development lies within its brilliantly innovative transit system. Traffic began to overwhelm the streets of Curitiba to the point that the people began begging the government to demolish roadside houses and widen the roads (something that has happened a lot in my city of Calgary, Canada). Instead, the innovative former mayor of the city, Jaime Lerner, decided to do the opposite, and narrowed the roads. Lerner had the sidewalks widened, included a bike lane, and created one of the most innovative transit systems in the world. Lines of transit began to spider web over the city, but unlike most metro systems in the world, this one took shape above land. In creating the system above land the city saved billions of dollars in digging tunnels which gave them the fiscal ability to create a wider reaching transit system.  To further save costs, instead of trains, the city employed large 200 passenger articulating bus trains. The result was phenomenal. It simply became faster to take transit than it was in one’s own vehicle, as a result the majority began to use the transit system.

Maybe Buenos Aires’ biggest problem is the swell of garbage that lines the streets. Curitiba once had the same problem. To negate the problem, and tackle a problem of unemployment at the same time, the city opened a massive recycling center and citywide pick up system which now employs hundreds and recycles around 95% of would be waste. At the same time, waste turned in by hand would be rewarded with school supplies, educational programs, and food tickets. The poorer segment of the population began turning in garbage to put their children through school, and give them the opportunity to break the cycle of poverty. As such, Curitiba has become one of the cleanest cities in South America.

The onset of higher standards of living in Curitiba has paid dividends beyond the direct results of which has been written about above. The high quality of life has managed to entice major car manufacturers to set up shop in and around the city. This state in Southern Brazil has quickly found itself as one of the leaders in manufacturing in South America. Curitiba is one of the many reasons that Brazil is a country fast on the rise within the global economy.

In the beginning, the potential to create a sustainable city such as this one seemed to be no more than a pipe dream led by a dreamer. In the end, it was realized that with a little bit of effort and persistence big changes can take place. And isn’t it great to see government do what’s right, and not only what’s going to keep them in office? Those of us who are often told that our dreams for creating a better world are nothing but fluffy clouds need to take note of places like Curitiba and remember that without our dreams we would not have the capacity to grow.