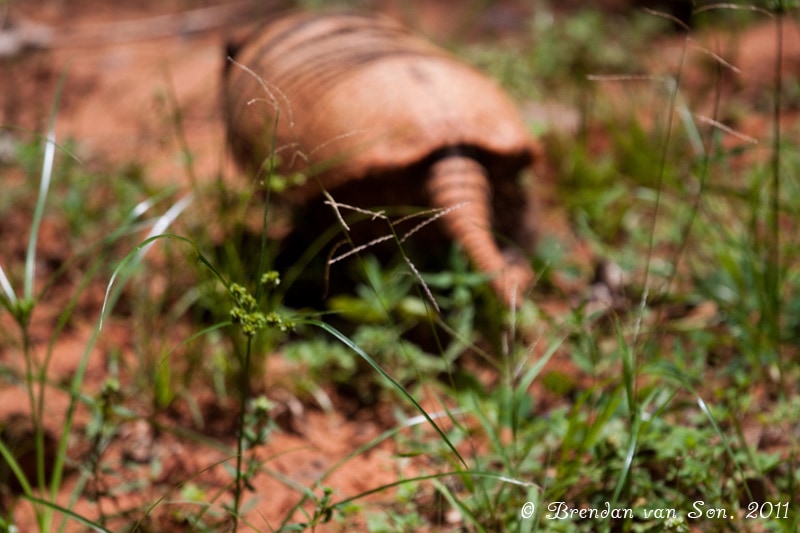 I went out to the botanical gardens when I was in Asunción, Paraguay because someone had told me that there are sometimes animals running around.  I did find quite a few animals, but most were birds along with some lizards and a huge iguana the hid in a bush before I could grab its picture.  The armadillo that I tried to photograph here was amazing.  He looked like a giant rat covered in army gear.  Unfortunately, he was also faster than he looked, and got away from me before I got a clean shot.  However, I came away with this shot which I think is really cool because it makes the out of focus nature of it makes the Amadillo really look as if he’s escaping.

To take a shot like this I first spot the animal.  Then generally I look at the direction it is moving.  Quite often animals  create paths in their natural habitat just like we do with sidewalks.  And although this was different and there was no clear path I saw a whole near a tree which I hoped was the home it was heading to.  So I moved slowly towards the whole and laid down on my stomach hoping that it would come close, and it did.  Unfortunately there was lots of grass in the way and by the time I had gotten a clear shot the armadillo was sprinting away from me.  Even though it didn’t really work on this occasion, it usually does.  I ended up with a bunch of photos of this armadillo which were much better focused than this, but I liked how this one felt more than the others.  Proof that sometimes are best photos are outright accidents.