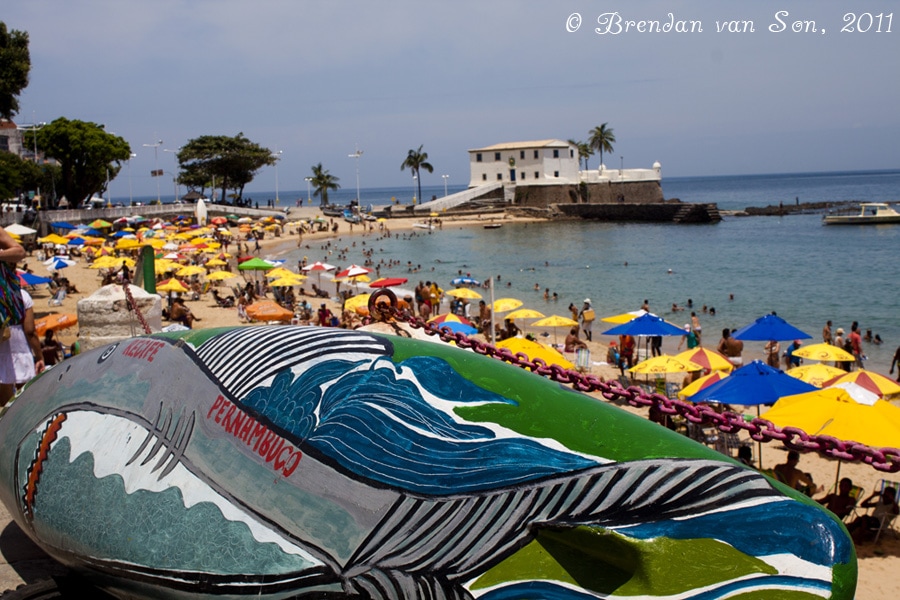 Salvador da Bahia is blessed as a city.  It sits on a very calm waters and is loaded with a number of different beaches.  This particular beach in the photo is actually only a stone’s throw from the tall apartment buildings of the Barra district.  The street that borders this beach is the very street that the famous carnival parade of Salvador da Bahia, Brazil.  At the end of the beach there was a series of these very colourfully painted boats each depicting a different region of Brazil.  This canoe that I featured in this image was from Pernambuco the area that I would head to following Bahia.

To avoid a photo from looking like a typical tourist snapshot there is a number of different methods.  I have used three of the methods in this taking of this particular photo.  The first thing I’ve done is created a specific subject and background.  So many photos will just be just the beach, so they have a subject but no background; that make photos look very flat and one dimensional.  The second thing I’ve done is used a narrow depth of field which blurred the background slightly.  This allows the viewer to know for sure what the subject of the image is, it also helps lead their eyes to subject and keep them from looking at distracting elements in the image.  Finally, I shot from a lower angle.  By shooting a photograph from an angle different than the usual eye level.  This makes the image look special, because it isn’t what the eye usually sees.