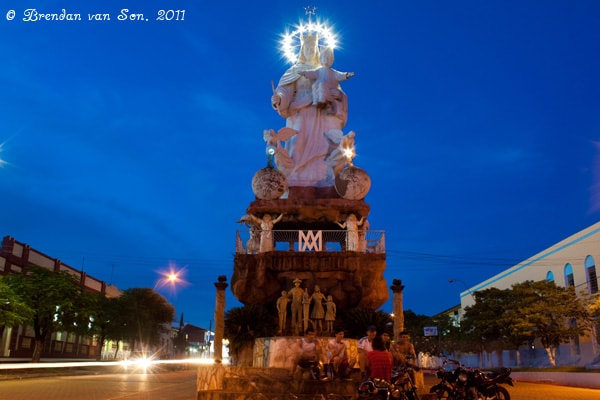 I am sure that I was the only tourist in Concepcion, Paraguay.  At times I wondered if I was the only tourist that they had ever seen.  I would sit out on the street every night and have a nice big beer with a huge dinner and just watch the city come to life.  I had a great time.  One of the biggest features to life in Concepcion is the need for a motorcycle or scooter.  Everyone in town seems to have one regardless of age or gender.  In the evening people just hit the streets in their bikes and cruise.  Sometimes you would see them riding side by side deep in conversation with one and other.  Sometimes they stopped, like these guys did.

I went to this spot to shoot and at first I was a little bit disappointed that this group was on the statue.  I shot from an angle at first that would hide them before conforming to the idea that if you can’t beat them join them.  I set up right in front of them and after disregarding a couple questions asking if I was taking photos of the famous motorcycle gang of Concepcion I started shooting.

The lesson here is that although it is great to have a vision for your shot sometimes you have to work with what you’ve got.  Shoot the situation at hand and your photos will show more than just an image but a mood.

Yesterday I published an Article on the capital of Paraguay: Asuncion