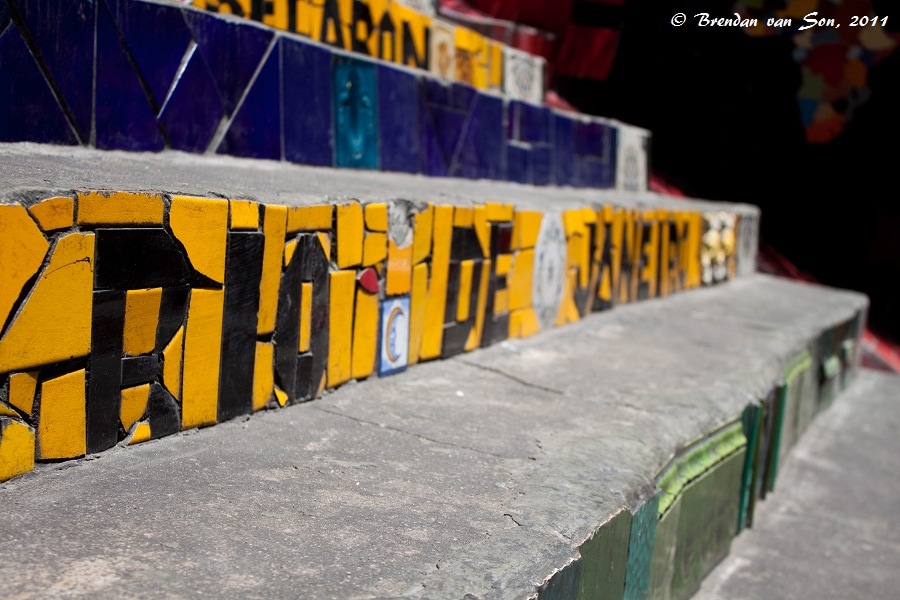 In Rio, as in any city, some streets are simply are not as beautiful as others.  Some of us have even lived on those streets.  We blame the government for not cleaning them up, but we do little to change things ourselves.  This walking street in Rio de Janeiro is different.  One of the local residents, an artist, took pride in the stairs that laid outside of his front porch.  So instead of letting them fade away, he took the initiative and beautified them.  The entire set of stairs (more pictures to come) are covered in these brightly coloured tiles, and include other tiles sent from all over the world.

I really wanted this shot to represent Rio.  I took the shot from level with the middle of the word and focused on the R of Rio letting the word fade away.  I think that in doing this it focuses your attention to “Rio” and then leads the eye across the image.  I obviously shot this on a wide aperture, but didn’t want to be too wide that Janeiro was completely out of focus.  I shot this image on f4.5 at 36mm with 1/500seconds worth of exposure time, Iso100.

Where do we go from here?

As I’ve arrived in Rio a couple of articles are due for this amazing city.  On Monday an article about the Rio’s mainstay in the negative news will be the topic in an article called “Rio and the Bad News Bears.”