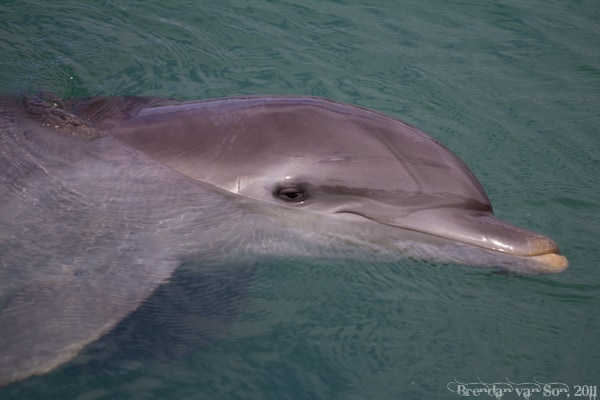 Dolphins are Better off in Captivity

Before this post, I will tell you that I fully intended this title to be written in “sarcastic” font. I recently participated in a dolphin swim in Jamaica as a part of a wonderful press trip with the Jamaican Tourism Board  However, I left the dolphin swim not only feeling disappointed but also in disbelief over the answers received when I scratched only the surface of questioning a site manager. Yes, I participated in the dolphin swim.  Yes, I thought the swim was a lot of fun.  Yes, I understand why people want to participate in the event. But just because something is fun does not, by any stretch of the imagination, make it right.

Upon arrival to Dolphin Cove near Negril, Jamaica myself and a small group of journalists were given the chance to hear about the property, the activities, and the animals we were about to see. The journalist in me couldn’t help but ask a few questions. I was hoping to receive better answers, but I guess I have to give it to the manager answering my questions honestly, even though they were not the answers anyone would want to hear. I scratched only the surface in my questioning, I did not feel like creating a conflict in front of the group. And it seemed that the group did not feel they wanted to dig deeper either, so I let things slide.  Here are my questions and the answers I received (please note that I am paraphrasing his answers, but they are in no way taken out of context):

Me: Where do you get your dolphins from?

Manager: Cuba, they came here on a plane.

Me: Are they rescued or do you capture them?

Manager: They capture them, then bring them on a plane.

Manager: To bring them here. We are protecting them.

Me: Protecting them from what? Nature?

Manager (obviously becoming frustrated with my questions): They are in danger in nature, one has a scratch from a shark attack, we are protecting them. Here they have food, shelter, and they are happy with the human interaction. It’s dangerous out there, humans are the leading causes of death in Dolphins. Look at the fence, it’s three feet high, if they wanted to leave they could, they could jump it. They like it here.

The truth is that the Dolphin Cove does take extremely good care of the animals. The lagoon that they have to swim in is absolutely huge, a proper lake really. The trainers are all really great, and the animals are given ample time by themselves. However, the treatment of the dolphins isn’t what I’m about to question, but the ethics involved in taking animals from the wild for entertainment value.

Although I bit my tongue the best I could during my questioning, I really wanted to ask the site manager how he would feel if taken from his family and environment. If we went into his house, shipped him, on a plane, to the Arctic of Russia and dropped him down at an all-inclusive resort in the cold how he would feel. Yes, he would be treated like a king. He would be given food, shelter, and all he physically needs. But there is a difference between good treatment and dependence. Dolphins, like people, are social animals that build and sustain relationships. To take either dolphins or people away from this social community is a crime. Yes the fence at Dolphin Cove is only 3 feet high, but the social wall that they have placed by taking them out of their environment is insurmountable.

I know that I’m no saint, but I can tell the difference between right and wrong. And to me, taking an animal from the wild to put on display for us is all wrong. Yes, I understand that by educating people of an animal it can create a greater appreciation to their cause. But the Dolphin Cove, unfortunately, is not about creating a cause, they are about gaining a dollar. Not only is Dolphin Cove home to the 6 dolphins but also sharks, sting rays, and a camel (yes, you read that right a camel in Jamaica).

Do I feel guilty about taking part in events at Dolphin Cove? Absolutely. But in the end it made me realize more and more that no matter how much joy and pleasure it gave me, it wasn’t worth the theft of a life; nothing is.