Dreaming of the Lake District

There’s something very intriguing about the title “lake district” isn’t there?  You can find them all over the world from Chile and Argentina all the way to Africa.  But when I was recently approached about the possibility of writing an article promoting the Lake District of England, I began to feel a tingle in my travel bone.  You see this is one of the places that I’ve wanted to visit since I first learned about its existance, and even though I am writing this from a nice spot overlooking an amazing beach scene in Brazil, I can’t help but be nostalgically drawn to the idea of visiting the lakes district.

You see, as I have spent nearly the past two years traveling every nook and cranny of South America, I have always told myself that I’d settle down a bit when I finally make my way back to Canada in July.  It seems though, that I am always hiding my underlying desire to continue discovering different corners of the world; like a child under a duvet hiding from monsters in his closet, am I hiding from my reality?  Because when I think of plopping down in one of those Ambleside cottages or one of the many cozy Keswick cottages, I can’t help but be intrigued by the idea of discovering a new part of the world instead of settling down. 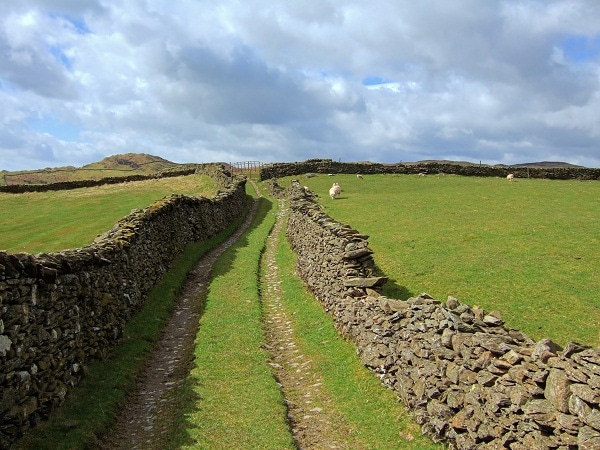 The road to the Lake District

When I used to think of England though, I thought of men in funny hats made of Canadian furs, outlandish red phone booths, and historical old buildings occupied by an older lady with a funny wave.  When I thought of England, I never thought about nature.  I thought of the city, the history, and the fish and chips.  It wasn’t until I met an older gentleman from Windermere once that I had even heard of the lake district.  He told me of rich green landscapes, rolling hills lined with country houses and rich blue lakes.  He told me of wide views standing high above low level clouds giving the sensation of standing on top of the world.  But most of all he told me of the scent.  The air, he claimed, has a freshness to it that could only be captured by nature.  He told me that if the colour green could be smelled, it would smell like Windermere.

I’ve put off traveling extensively through England, and Europe for that matter, on the basis that it is too expensive for me and that I can do it when I’m older.  But I could see me wandering around looking for accommodation in Windermere like I do down here in South America; backpack on shoulders curiosity on my sleeve.

As I type “Lake District England” into google images the photographer in me tingles with the opportunities that would present themselves there.So for now, the Lakes district will have to stay where it is, in my dreams.  But I know that one day I will wander the paths that wind along the hillsides.  I know that someday I will set my eyes and camera lens on the colourful lakes and clear waters of the rivers and lakes.  And most of all I know that someday I will breathe in the scent of the air described by the old man.