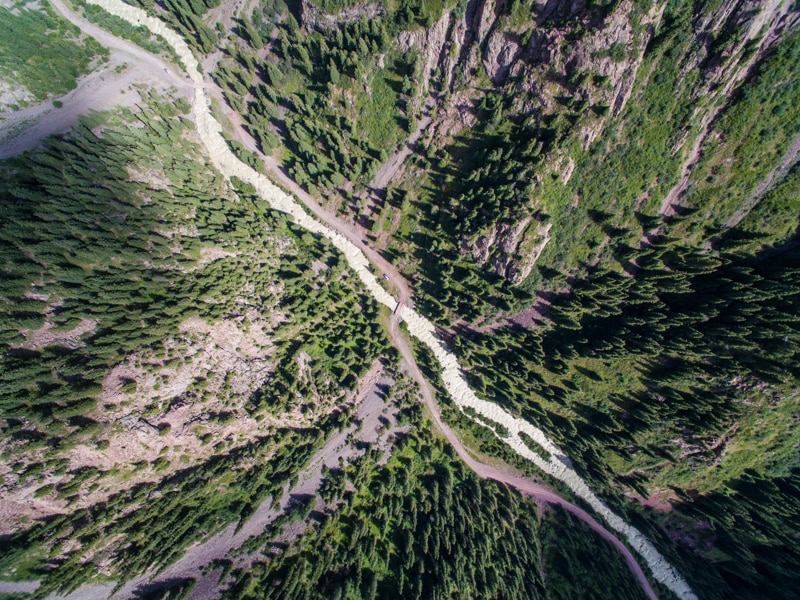 It has been a while since I’ve been to a country with as much freedom to roam, explore, and fly drones as Kyrgyzstan.  The country is just so wide open that it’s really easy to fly.  It’s also very safe to fly.  And, of course, it’s really beautiful which is a bonus.

Unfortunately, my drone is having issues. It needs to have the sensor, and maybe the whole camera repaired.  So, I wasn’t able to be as effective with the drone as I wanted to.  But, I still managed to capture some cool footage of the country.

Oh, and if you’re curious, this is the drone I use.

But, even though my equipment wasn’t perfect, I still wanted to share a couple aerial photos with you from my trip to Kyrgyzstan. There’s just something special to drone photography. It offers a different perspective. So, even though you’ve probably seen a lot of my images and my vlogs from the country, I wanted to share this different perspective, and the stories behind them all. 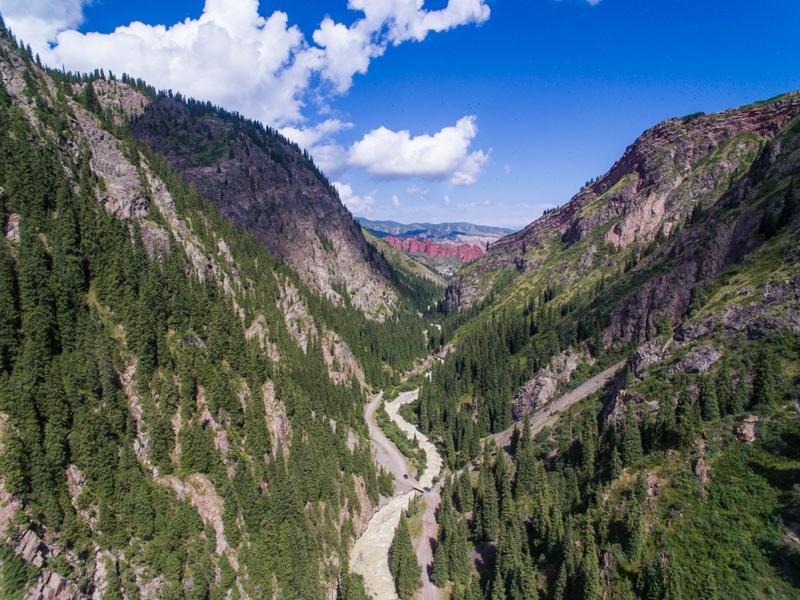 I had no idea that Kyrgyzstan had a lake that looked almost like a tropical sea at points. On the south side of Issyk-Kul lake, the shores are a bit rocky, but the water is so blue in points it looks like the waters of Croatia or Turkey.  It’s a very popular place for locals to vacation. 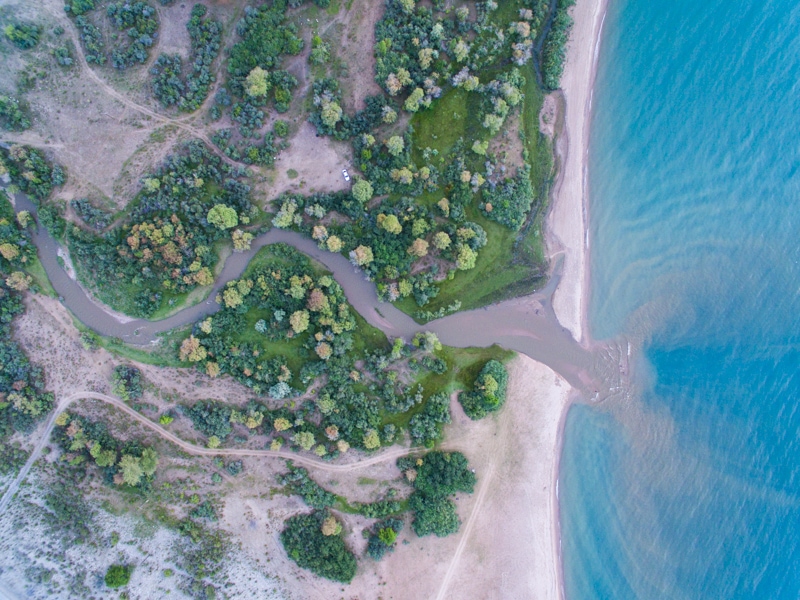 On one of my first days in Kyrgyzstan, we went to see a mini “Nomad Games” which was sponsored by USAID BGI and set up in part by the yurt camp I was staying at: Bel-Tam.  The games were awesome. They showcased eagle hunting, archery, and even dead goat polo (Kok-Boru).  I shot this image at the end of the games to show how diverse the landscape is in that location around Bel-Tam.

You have the lake, almost a desert-like shoreline, and then the mountains in the background.  Only a drone photo can show the scale of it all like this.  This image doesn’t show the yurt camp itself (which is just down the hill in the front of the image), but the grounds for the nomad games. 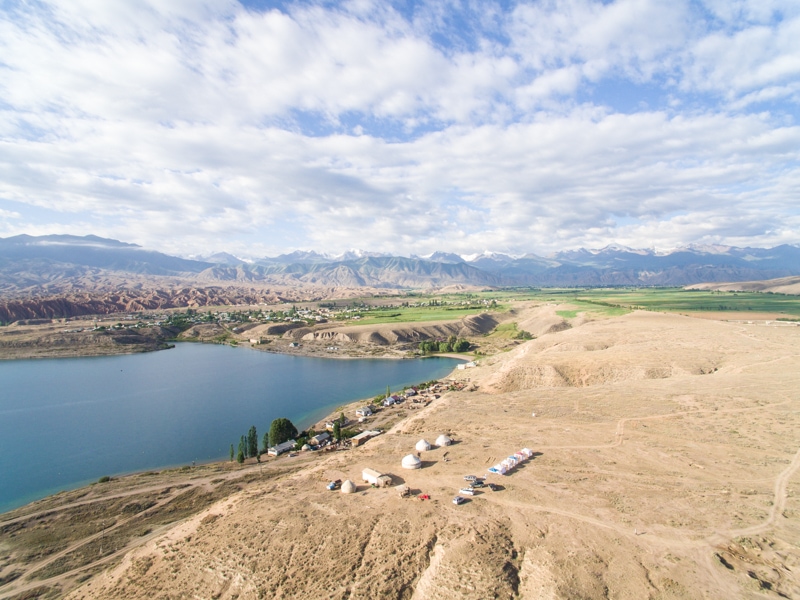 After 2 days in Kyrgyzstan, I was already dying to see some of this Kyrgyz wilderness that everyone was talking about.  So, we headed off on an excursion into this beautiful gorge.  The only problem was that I forgot my camera’s SD card.  Luckily, I had the drone.  And, thankfully, it’s just the tool I needed to showcase the scale of this landscape.

In this image, I got really high.  In most of the world, the drone laws put the max altitude you can fly at about 120m. In Kyrgyzstan, you can get a bit higher than that. So, I got some height on the drone, and was able to capture this cool image of the countryside below.

The Coolest Campsite Ever

After a week in Kyrgyzstan, I was so ready to head off on my first epic hike. Leaving Karakol, I went on a 3-day hike into the Jerghez, Ak-Suu, and Arashan Valleys. The views were unreal, as were our campsites.

And though I got a lot of cool photos from down at the ground level, the images from above kind of just show more. The perspective of drone photography let’s you share the whole picture. 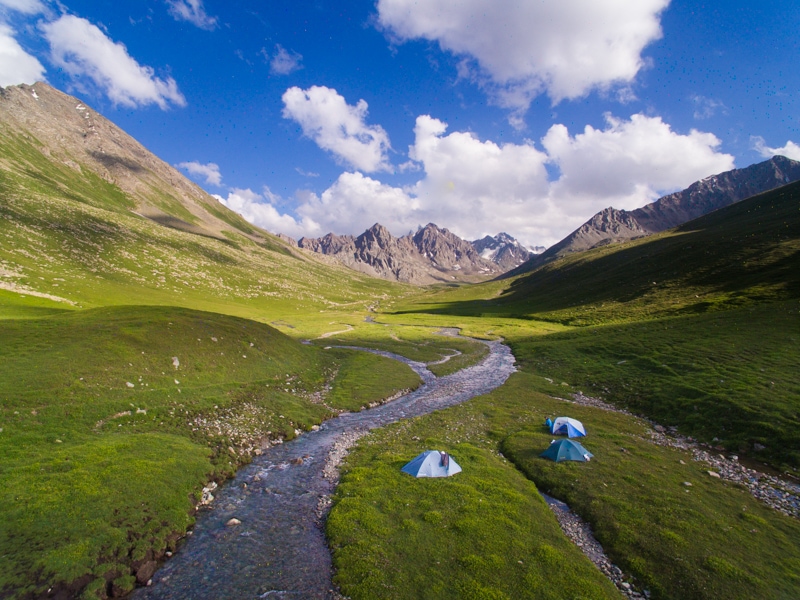 One of my favourite things about having a drone is the fact that it really works as an icebreaker with locals. I noticed this in other countries as well – The Philippines, for example. And, it was true again in Kyrgyzstan.

I felt myself having a bit of a hard time connecting with my guides on my 2nd 3-day hike; the language barrier was a bit of an issue. But, as soon as they saw the drone and heard the engine turn, they opened up and got a bit excited. It sort of brought us together for a moment and broke down the walls. Obviously, I needed to take a drone selfie of that moment. 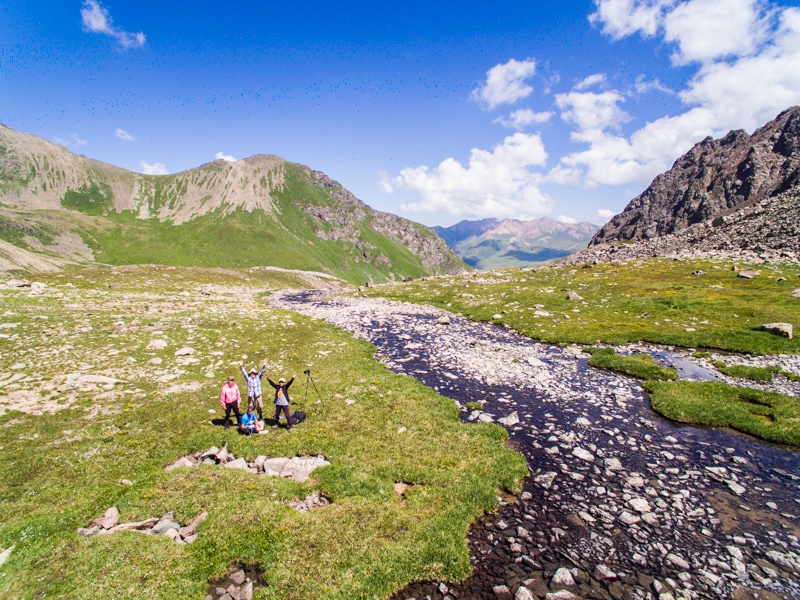 Drones obviously offer a different perspective with their ability to go high. But, what so many people miss is that they also offer a possibility to shoot photos from places you just can’t get to on foot. Like, in the image below, over deep glacial water.

There is no way I could get this image without a drone.

I was flying about a foot off the water in the middle of a glacial lagoon on top of a mountain. I love the perspective the drone gave me. It gets low to the water and gives a really cool reflection. 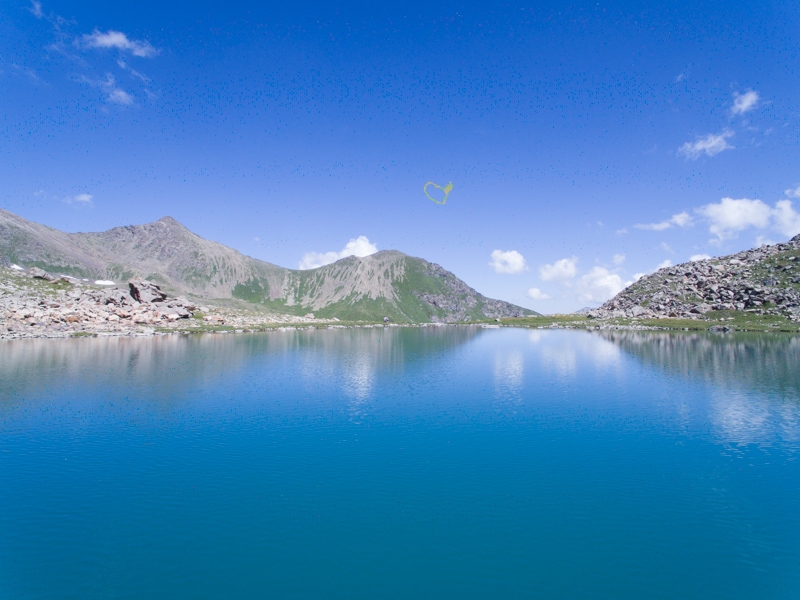 I’m trying to get caught up on these blogs, and will eventually get there. In real time, I’m in England and have just finished an awesome trip up to Scotland. Check out the travel vlogs for the real-time adventures. Here on the blog, I’ve got 2 more posts from Kyrgyzstan. I’ve also got a post coming from Scotland and one from London. So, stay tuned to those!

And, if you haven’t seen my most recent set of photos from Norway, be sure to check them out.