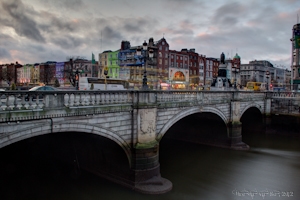 Dublin: the little village that thinks it’s a city. Or maybe it’s the other way around; I’m not all too sure. Regardless, Dublin, Ireland was the first stop on my Europe trip which to date has been amazing. However, when I got to Dublin, I have to admit something: I got culture shock. I’ll go into this embarrassing situation in a post coming up, but let’s just say that for about 3 days I felt like I was in a parallel universe.

Anyways, the photo of the week is an image that I knew I wanted as soon as I arrived in the city. I tend to wander quite aimlessly around a place when I first get there. I don’t take a lot of photos, I just look for potential shots I might want to get in a better light or at a different time of day. But most of all, I try to get a feel for the city.  I later try to exude that sentiment through a photo. For me, Dublin felt like it was a big city trying to be a village, and somehow for me this image captures that. The old bridge, to me screams small and quaint, but the traffic and buildings above it tell of the chaos of the city, and that’s exactly what I was hoping to show.

This is an HDR (High Dynamic Range) photo which basically means it draws from more that one photo exposure to create a better range of light into one image. Without getting into too much detail the human eye can see a certain amount of light (colours), the amount of light that the human eye sees is actually more than a single photo can capture. By placing 2 or more photos together digitally you expand the range of light shown in the photo. Thus, where a single photo might have a lot of dark shadows or blown out highlights an HDR photo can capture all those types of light properly.

The danger of the HDR photograph, of course, is that if you overdo them they can look horribly phoney. Also, you have to remember that just because you’re shooting in HDR doesn’t mean you can forget the principles of photography. You still need to shoot the right scene, the right light, etc.

This image was made with 3 separate raw photos: one underexposed by 3 stops, one exposed properly, and one overexposed by 3 stops. I then processed them in a program called Photomatix Pro. The properly exposed image was shot at a focal length of 18 with an aperture of f/16 and a shutter speed of 2 seconds, ISO100.