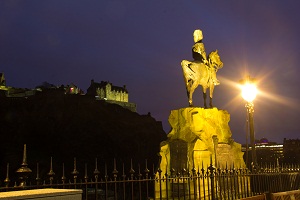 Edinburgh: Where McDonald’s and Castles Live Together in Harmony

Feeling like a character in one of the Shrek films I hike up High Street amused by my surroundings. I peer over my right shoulder and down the hill to see the Queen’s resident comfortably nestled at the bottom. As my head turns to regain its natural position it spots an old pub; the haunts of old men and stories. My tired knees continue to climb as I pass Mary King Close; once host to some of the most storied writers of our time, and perhaps the current commune for those looking for inspiration as well.

“This is the land of fairy tales,” I can’t help but think, “this is where princesses walk the street and ogres prowl from the forests below.”

However as I continue to stumble up the street I am struck by the reality of modern Edinburgh as well. The line of a busy Starbucks branch on the corner leads into the street as people desperate for a fix of American coffee wait patiently for a Grande Chocolate Machiatto Espresso Super Latte.

I leave high street and begin hiking into the park that forms in the depression between sides of the city: new and old. On one side a historical building flickers with the navy colours of the Union Jack, narrow streets are bordered by towering walls, and a castle stands guard on the hill glowing in the light of the setting sun. On the other side of the valley, construction is under way on the main road.  Large glass windows provide shoppers with a glance into the fashion they could be sporting.  And at the end of the street a McDonald’s restaurant stands directly across from the high castle walls.

There was a time in my travels where this might have bothered me. I would have scoffed at the fact the world of corporations has taken over, how beautiful historical roots and culture have been taken over by H&M, Next, and – of course – McDonald’s. However, I’ve come to accept the fact that this world changes, and sometimes McDonald’s takes over streets that were once dominated by peasants and feudal lords alike.

As I sit down on a park bench in the middle of these two worlds I take a different approach this time. I stare off into the not-so-distant views and not only take them in, but try and imagine what they must have looked like 100 years ago, or 1,000 years ago.

Amazingly, despite the influx of Starbucks-type businesses in Edinburgh it still manages to maintain its appeal. It is perhaps the most attractive city in the whole of the United Kingdom, McDonald’s fast food or not. It’s hard not to walk the cobbled streets of The Royal Mile without feeling like you’re in a movie. But if you want it, the modern world lies just across a park.