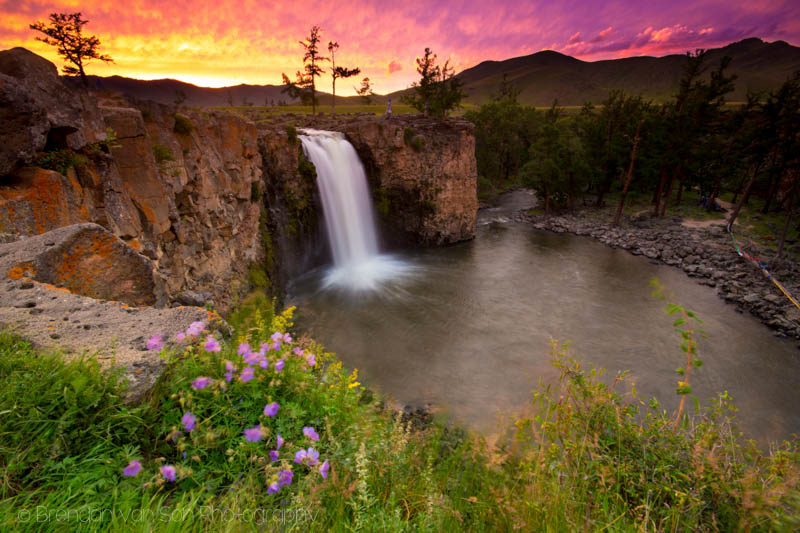 With landscape photography, it’s often the case that you have some trouble bringing out the colours of the sky, as well a bright foreground, when shooting around sunset or sunrise.  What often happens, especially if you’re trying to shoot directly into the light, is that either your foreground is completely underexposed, or your sky is way overexposed.  Getting a fluid image which is properly exposed across the scene can be difficult.

One of the ways we can combat that problem is by using filters.  However, even by using a gradient ND filter, we can often leave ourselves with a harsh line between the sky and foreground.  Also, we can leave ourselves with some dark spaces.  One of the best ways to combat the problem, then, is by creating two separate exposures – one for the sky and one for the foreground – and then blending them together in Photoshop or Photoshop Elements.

There are a number of different ways to do this, but I’m going to walk you through the process I’ve used to make this image.  I’m also going to show you just how quickly I can make it happen.  Check out the video from the instructions, or if you prefer a written guide, check out the information below.

Step 1: Getting it Right in the Camera

The trick to this process is that you need to get it right in the camera.  No amount of Photoshop will fix that.  The way to do it is to shoot two different exposure, that we’re going to later blend together.  The first image we’re going to shoot is for the foreground, and should be exposed for the elements in that foreground.  In my case, I’m exposing for the foliage.  Then, you need to take another image that’s exposed for the sky. Moreover, like shooting HDR Photography, you need to make sure your camera is on a tripod and that it doesn’t move.  Otherwise, when you blend the images it might not align properly and you’ll have issue with softness. These are the two unedited RAW files that I shot:

When you import the images into Photoshop CC, you’ll have the opportunity to edit the images.  You’ll want to edit the brighter image just for the foreground.  It doesn’t matter what the sky looks like, all that matters is the foreground.  Then, obviously, you do the same thing for the sky.  Edit the RAW file you shot of the darker image for the sky and edit it the way you want it. Then, select all the images and bring them into Photoshop.

Step 3: Place and Create a Mask

The next step is the big one.  You’re going to use the place tool and drag the darker image on top of the brighter image.  Make sure they align.  If they don’t align properly, it wont work. Then you’re going to create a vector mask to the image on top in the layers menu.  Then, you’ll chose the gradient tool.  With this tool, you’ll draw a line which will reveal the bottom image.  If you put the gradient in the right spot, you’ll get a nice flowing image that is properly exposed from top to bottom. If you need to do a bit more work to lighten or darken certain areas, you can also use the brush tool now in that same vector mask, to make the blending of the images even better.  Just paint over the areas of the image that need work.  It’s also best to use a lower opacity so only some of the bottom image comes through.  This also helps ensure that the lines aren’t too harsh.

On my image, I cleaned up some of the foliage that was a bit distracting to the water, and that’s it.  Once you get a cool blended exposure, you shouldn’t need to do much because the RAW files were edited and the light was amazing too.

I’ve got more from Mongolia as I have a “getting the shot” episode from Central Mongolia still to come.  I’m back in Switzerland now, and so stoked to have fast internet once again.  It makes getting the tutorials online so much easier.  If you haven’t seen it yet, be sure to check out my video from Southern Mongolia and the Gobi Desert, too. Anyways, over the next little while I’m going to have some travel photography gear reviews as well as some cool content from Switzerland, Iceland and beyond!  Stick around!