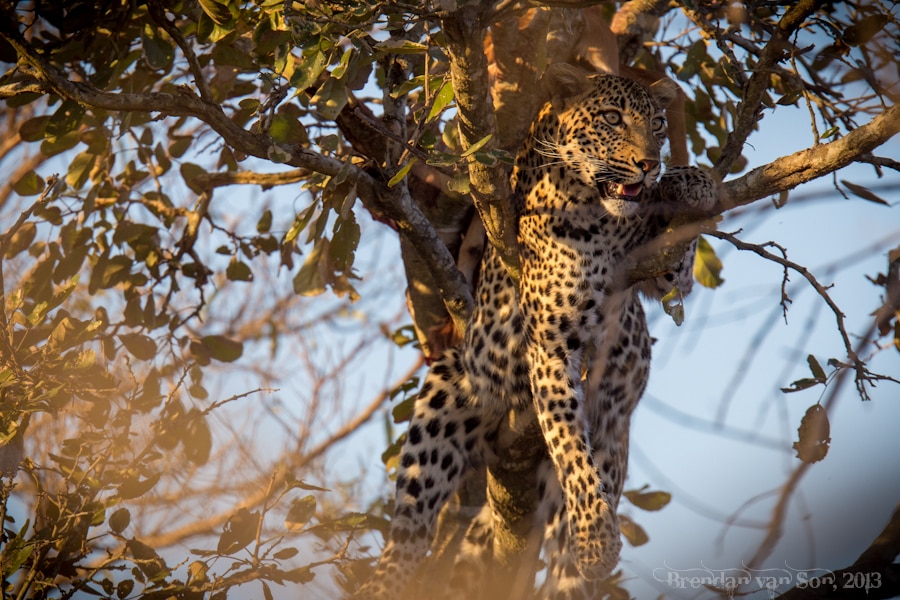 Finding my Leopard in Kruger

The second leg of my South African road trip started off with a bang: a week of safari in Kruger National Park.  Sadly, this was also meant to be my last safari in Africa, and I still had a couple of sightings to knock off my wishlist, atop that list was the elusive leopard.

Not only is the leopard a difficult animal to spot for most, but it had been teasing me ever since I had arrived in Southern Africa.  First it was Chobe National Park in Botswana.  I had been planning to leave on a safari on a Friday, but I got a call asking if I wanted to jump ahead and join the Wednesday tour instead.  Of course, I did.  And even though that tour was brilliant, the group that came back to Jollyboys Hostel from the Friday tour did so bragging about the leopard that walked right beside them for 10 minutes.  Then there was the Etosha incident, when I turned up to a waterhole at night and everyone was leaving bragging about the leopard that had just stopped by for a drink.

My leopard luck in Kruger National Park didn’t seem to be going much better.

For a week prior to arriving in Kruger, I’d been tracking a twitter feed called @LatestKruger that posts reported wildlife sightings like this one:

For each day of that week, I saw sightings of a leopard hunting, sleeping, and eating at a place called the Transport Dam.  Thus, the day I entered Kruger, I stalked the area.  I camped out in an place where I thought it might go, and I waited patiently and quietly.  But after an hour, I gave up because I was worried about arriving late to the gate.  The next morning I did the same, and I had the same result.  So I returned to the camp defeated.

As I shopped at the grocery store in Skukuza Camp midday a man ecstatic and prideful asked, “did you see the leopard yesterday?”

I shook my head no, and said I must have missed the sighting.  He looked back at me and said, “you were right there, I thought you must have moved to the other side to get a better view.”

You see, the man, and his family had stopped behind me to see what I was looking at the evening before.  Of course, I wasn’t looking at anything, or so I thought.  Apparently, no more than a second after I left, a leopard came running through the bush being chased by a pack of hyenas (another one of my elusive animals) and climbed a tree next to their van.

That afternoon, dead set on finding my leopard, I went back to the same spot.  There wasn’t a car in sight when I arrived, but as I scanned nearby trees, I found him along with part of the carcass of an impala.  He was beautiful, had big sharp eyes, a perfect coat, and a dangerous smile.  He breathed heavily as he ate, and as I photographed.  Soon, he dropped his head on a branch and slept.  By the time I left the sighting, there were another 20 vehicles surrounding me, but me, I got this leopard to myself, and it was more than worth it.

Much more from Kruger National Park to come.