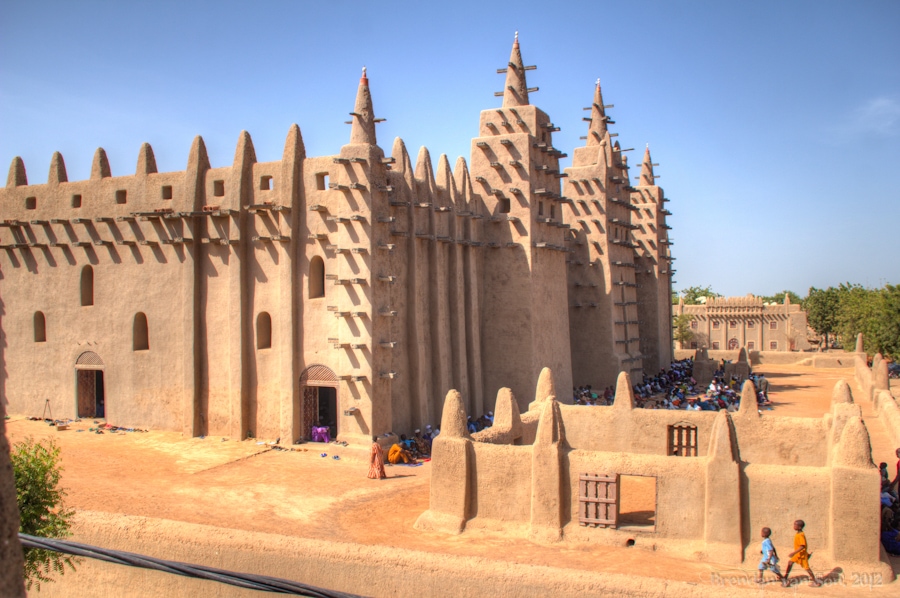 The Grande Mosque of Djenne, Mali – Photo of the Week

I took a bit of a break from my travelcation in Bamako a couple weeks ago to head out and explore a bit of the interior of the country.  As you may know, Mali is currently a country divided by a conflict involving a faction of Al-Qaeda.  Essentially, the conflict has divided the country in half.  While most say that the south is relatively safe to travel, the kidnapping of a French-Portuguese man last week in the south-west near the border of Mauritania shows the delicate nature of safety in the region.  In general, people have stated that the country is relatively safe, as long as one stays south of the city of Mopti.  Thus, despite slight reservations about security, I headed north to both the towns of Segou (where I got last week’s photo of the week of the Niger River) and Djenne.  While Segou is nowhere near the front line of Mopti, the ancient city of Djenne is only about 100 km away from the line drawn in the sand.

I’m glad I made the trip, and have to say that I felt completely safe the entire time.  I’ll have an article about my time in the city of Djenne in the next couple days.  It really was a magical place of beautiful mud architecture, friendly people, and even a touch of magic.  The photo below is a shot of the grande mosque in Djenne.  It is the largest mud building in the world according to the locals, although I wonder if the people in Chan Chan, Peru have some contention with that claim?  In any regard, the grande mosque is incredibly beautiful and reminds me of a giant sand castle.  I didn’t know this place existed until I did a google search about 6 months ago and my reaction when seeing the search results was “why does no one know about this place?”  It only took one look to want to visit it.  Now, after seeing this image below of the grande mosque of Djenne, do you want to see this place in person?

How I Got this Shot of the Grande Mosque in Djenne

Good photography is all about time and place.  In terms of time, you want to be 1) shooting around sunrise or sunset when the light is a little less harsh or 2) shooting an important moment.  If you can do both, you’ve hit the jackpot.  I shot this image on a Friday during afternoon prayer at the grande mosque.  All the people in Djenne dress up in fantastic outfits and head to the mosque to pray.  It’s a phenomenal sight.  In terms of place, what I mean is that you have to find a nice vantage point.  If I shot from in front of the mosque I might pull some cool images, but it would be one dimensional.  An image should tell a story, as dozens of people praying from the shade of the mosque does.  Noticing the need to be higher to see into the courtyard of the grande mosque I paid a neighbour 200CFA for the right to climb onto their terrace to shoot photos.  It was well worth it.