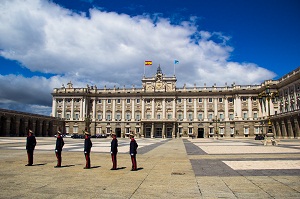 I’m not sure if I expected a little bit more from Madrid, or just from this hostel.  My experience in Madrid was really good, but nothing really blew me away.  Yes, I loved the tapas culture, the cheap glasses of beer and the museums are fantastic.  But the truth is that nothing really stepped up and made me say “wow!”

While in Madrid, I stayed at the Sol Hostel which is located about a 5 minute walk from the main train station in the city.  The hostel was average on so many levels and reminded me more of social housing than a hostel.

The rooms were decent, but lacked any sort of character.  They had lockers, so I can’t complain too much.  However, when I arrived I only had a sheet on my bed.  I assumed that this meant that the rooms would be warm.  Unfortunately, they were freezing and I spent the night in my -35 degree sleeping bag instead.

Again, everything is here but it just lacks any sort of feel.  It all felt really desperate and poorly.  The wifi internet only worked in the lobby area so if you wanted to check up on things you had to stay stuffed into the small reception area or hang out on the stairs.

Another complaint is that they had a buzzer system to get into the hostel which is fine.  However, quite often the staff was busy off doing something else so I had to wait at the door 10-15 minutes for someone to come by.  That shouldn’t happen.  They’ve got to figure out a different method, or make sure there is someone at the door the whole time.

The staff was very friendly and as helpful as they could be.  But having said that, they were so understaffed it seemed that they couldn’t handle it if more than 2 or 3 people were at reception.  It took me about an hour to get checked in and shown to my room.  I wasn’t the only one, as people later on had the same issue.

Madrid is supposed to be one of the party capitals of the world.  But if you were at this hostel you wouldn’t have a clue.  There is very little done to get the visitors into the Madrid spirit.  And aside from one group of people drinking in their room, there was nothing going on.  Moreover, the atmosphere of the hostel felt like a low-security prison.  I just don’t get it.

The location isn’t bad, but it isn’t good either.  If you’re just looking for a place to crash for one night between train trips, this might be the place for you since it’s only a 5 minute walk from the main train station.  It is also very close to a couple different metro stops.  It is also very close to some of the good museums like Reina Victoria.  The problem is that it is quite a ways away from the center of Madrid (Puerta del Sol).  During the day it’s fine as a metro connects you quickly.  But the Madrid metro shuts down at about midnight.  So really, I don’t think I should knock the hostel on this but rather Madrid’s metro system itself

Yeah, I think I made it clear that I wouldn’t stay here again.  However, from what I’ve heard from most people, there just aren’t a whole lot of good hostels in Madrid to begin with.  It surprises me that a city like this lags behind in the hostel game.  Just next door in Portugal, the hostels are among the best in all of Europe.  So it’s a shame the hostels in Madrid can’t keep up.