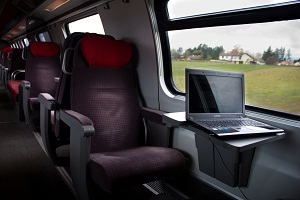 How Much Does a Eurail Pass Save You?

I will say, I definitely got value out of my pass by doing some fairly long journeys. However, if I really wanted to, I’m sure I could have extended my distances much more and the savings gathered would have been even greater.

After calculating, I’m actually pretty amazed by how much was saved with the Eurail. I calculated the price of the ticket as the price a week before purchase which I assumed would be the average time one would buy their train tickets without a pass.

First Class on a train in Switzerland

If you’re interested in knowing how the Eurail ticket works I’ll be explaining it in a future post.

First Class on the train from Milan to Rome

How Much Did I Save?

If I didn’t have a Eurail pass, I would have booked a ticket one week ahead.  Therefore, I took the prices down a week before my trip would have been:

You would have to be clinically insane not to buy a Eurail pass if you were planning on travelling Europe by train.  I mean seriously, the amount of money saved could buy you a second rail pass!  Or, if you’re like me, that 495 Euros will buy you lots of overpriced beers.  If you were looking for the answer to “How Much Does a Eurail Pass Save You?” well, let’s just say that it’s a lot.
Travelling by train in Euro is an amazing way to see the countryside, it’s comfortable, it’s efficient, and there are very few hassles.  After travelling this way for a little over a month, I couldn’t imagine doing it any other way.  A massive thanks to Eurail for giving me the chance to have this experience.
——————————————————————————-

***Note: Eurail is one of my sponsors, they provided me with a free first class global pass to test their services. They have not influenced the content of my article nor have they demanded that I write on this topic. I am a journalist, and regardless of whether or not they are a sponsor I call it as I see it. After using the Eurail, I can’t imagine travelling Europe without one.  Check out this post on How to Book a Ticket Using a Eurail Pass.