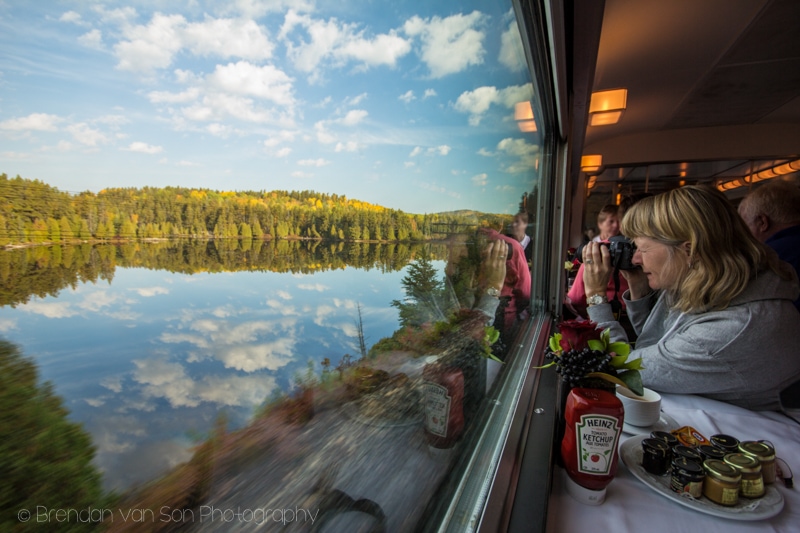 How to Take Photos from Trains: A Photo Guide from the Via Rail

For the second time in my life, I had the brilliant opportunity to take the VIA Rail across Canada from Toronto to Edmonton.  And well I would have loved to make the journey all the way across to Vancouver, I really can’t complain.  This trip always has a way of grounding me and allowing my stressed to wash away, or at least be put on the back burner for a while.  I thought, that since I did a general article on the train journey last time, I would give a bit of a guide on how to take photos from a moving train here on the site.  Of course, there’s also a little bit of information about the train journey across Canada below as well.

Whenever you’re shooting through windows you’ll have glare.  However, in trains you’ve got really thick panes of glass which means it’s even worse.  There are a few tricks you can use to get rid of this.  One of them is to get your lens as close to the window as possible.  Another trick is to turn on all the inside lights in your cabin.  Also, you can try shielding the glare with a towel, sheet, or even just your hand.  Glare ruins cool photos, try to get rid of it. 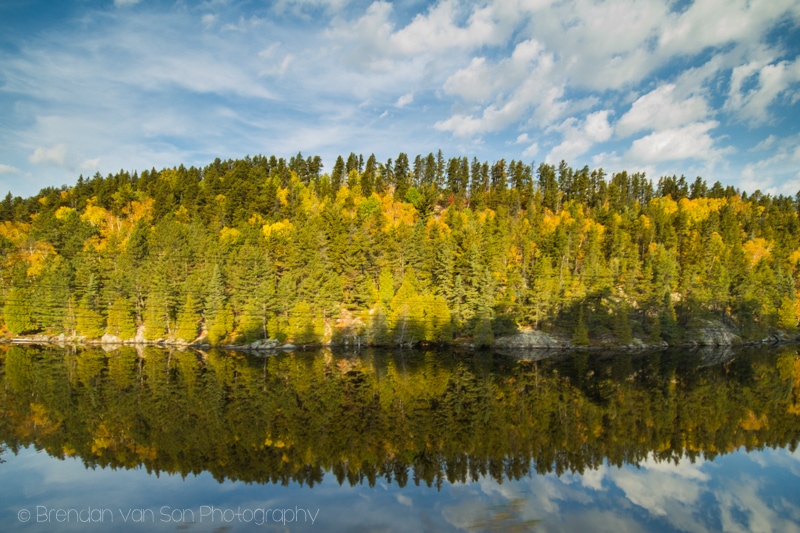 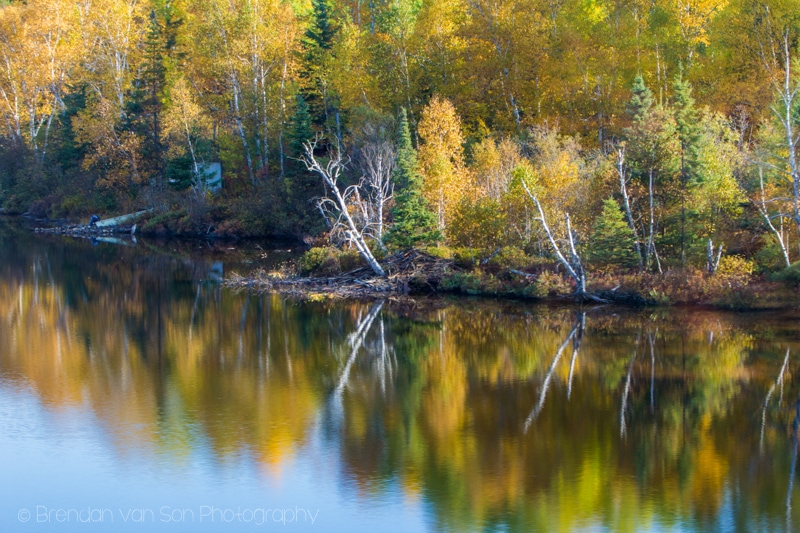 When you’re shooting photos from a train, the outside world speeds by meaning that you need a quicker shutter speed to capture it sharply.  Now, if you’re familiar with the basics of photography you’ll know that there are three components to gathering light for the right exposure: aperture, ISO, and shutter speed.  Thus, if you need to speed up the shutter speed you’d need to increase your ISO, open up your aperture, or some combination of both, to compensate for the decrease in light.  Personally, I just bump the ISO to compensate because I don’t want to lose any depth of field.  Remember that if you double your ISO, your shutter speed will double too. 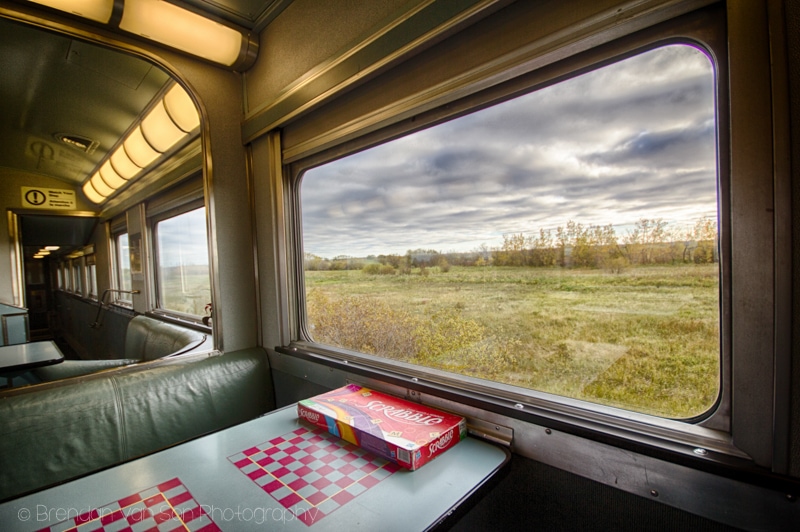 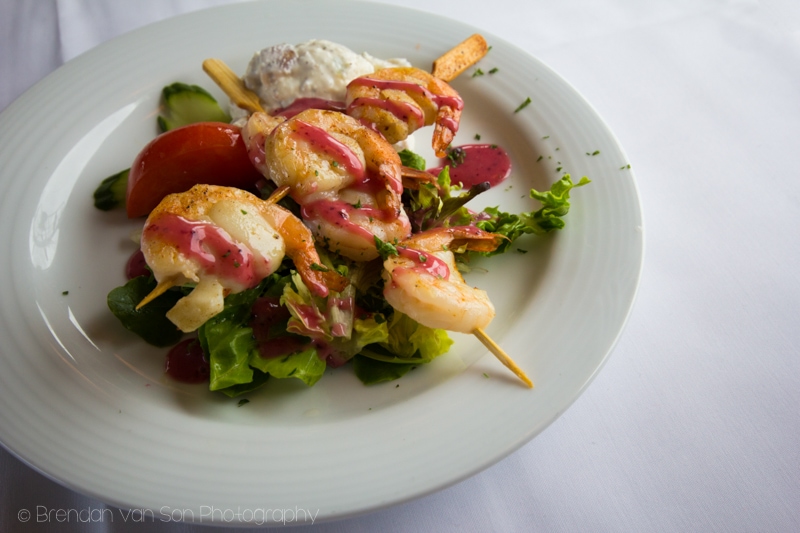 #3: Use the Movement to your Advantage

In photography movement is only your enemy if you don’t know how to take advantage of it.  When you’re in a fast moving train, you can take that speed and play with it with slower shutter speeds.  You can do fun things like creating a motion blur for outside the train windows to make the world look like it’s flying by.  You can also, if given the opportunity, get your camera outside the train window and shoot a still looking train with motion on the side.  On this trip, I also shot the train tracks this way.  Motion is your friend, so take advantage of it. 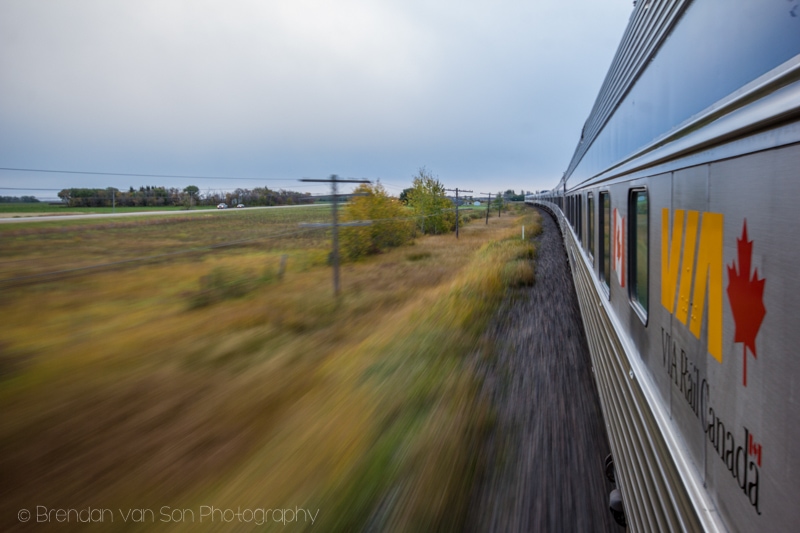 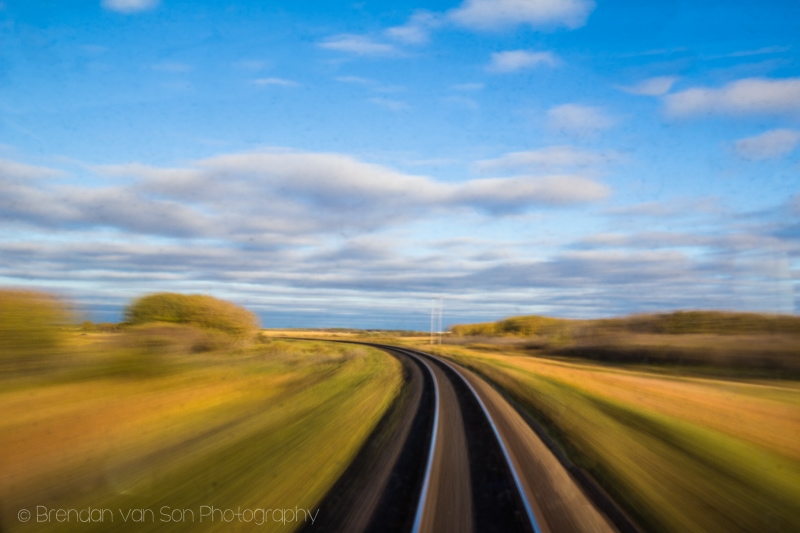 #4: Focus on the Details

It’s easy to look out the window of a train and want to capture it all.  However, you need to also try to capture the smaller things out there.  Otherwise, you’ll end up with just a lot of photos that look really similar.  On a train ride like the VIA Rail get out a longer lens and try to pick out some of the details in the landscape like the farms, cabins, and tractors. 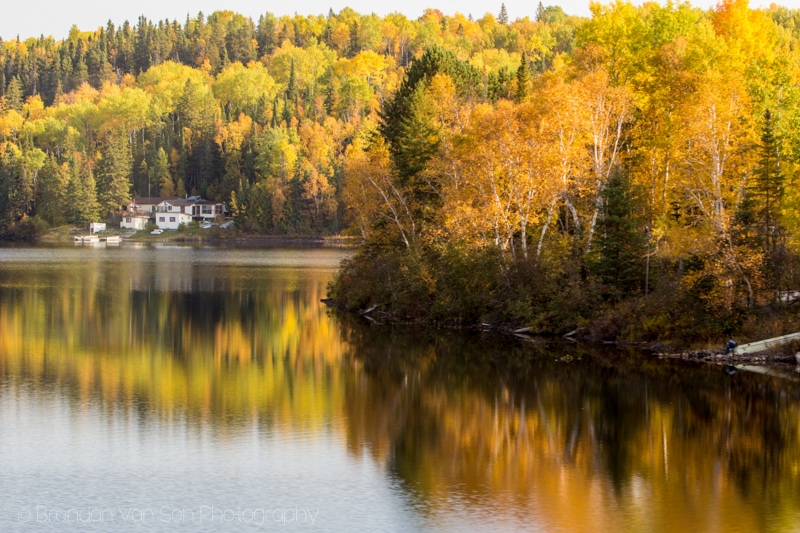 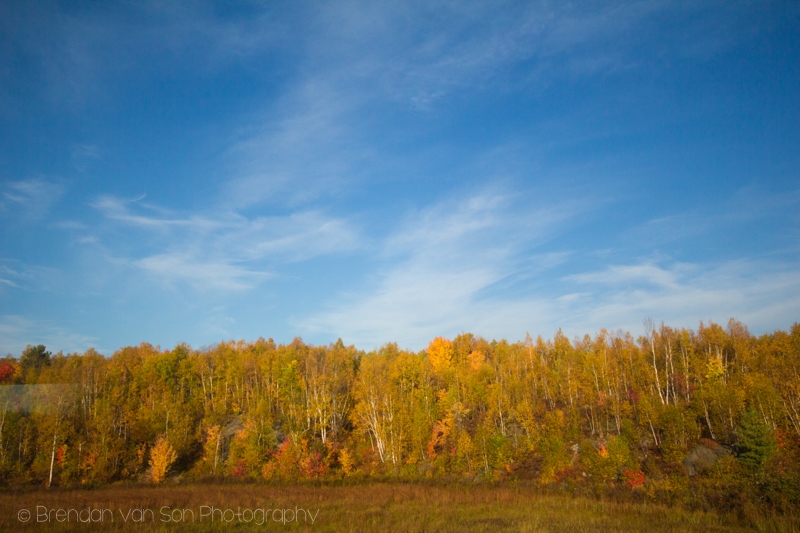 #5: Don’t Forget the Inside of the Train

You could easily just sit staring out your window all day shooting out at the world beyond, but part of photography is capturing the whole pictures.  Of course, that includes taking photos inside the train as well.  In tight spaces like trains, I like to pull out a really wide angle lens like the 10-20mm Sigma (16-35 instead for full frame) and give a nice full view of life in the train.  Capture things like your suite, the dining car, the viewing areas, etc. 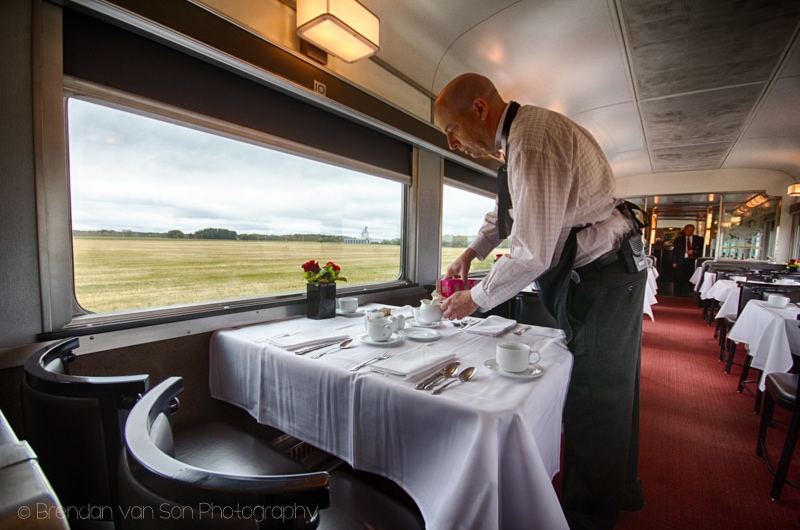 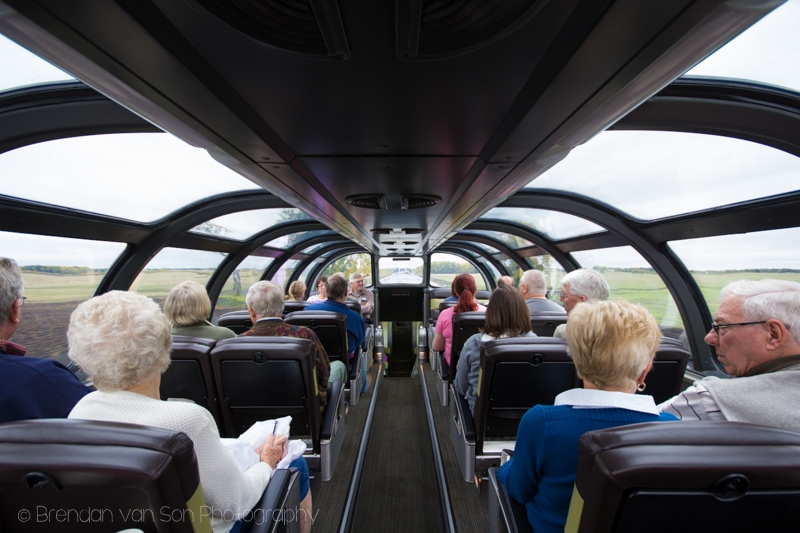 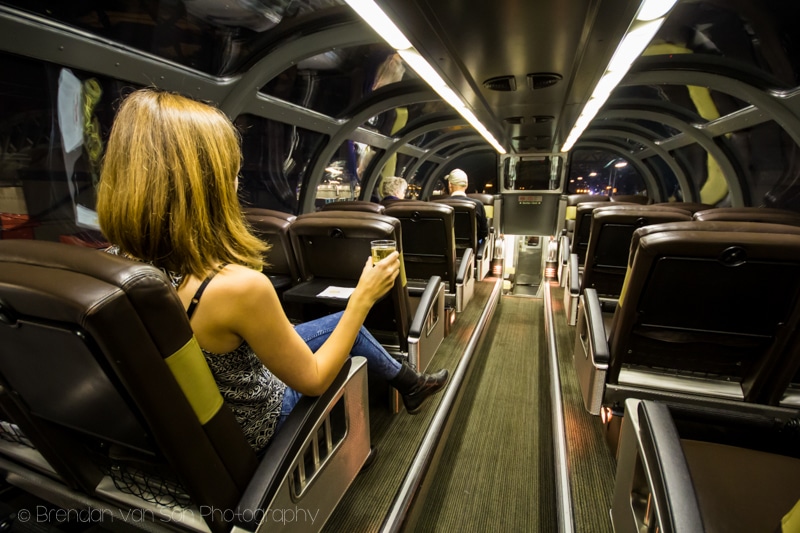 No matter what kind of photography you’re doing stabilization is so important.  Whether you’re doing travel photography in Iceland or whether you’re taking photos on Safari in South Africa, you need to keep your camera still to get the highest quality photos.  On trains, it’s as important as anywhere as the vehicle is always bumping around and shaking too.  Personally, I like to use a monopod well shooting in trains.  A monopod is great because it gives you added stability, but still lets you be completely mobile.  I also like that in the tight spaces of the train it doesn’t get in the way of other passengers.  I used my 3 Legged Thing Brian tripod and pulled off the detachable monopod for most of the trip. 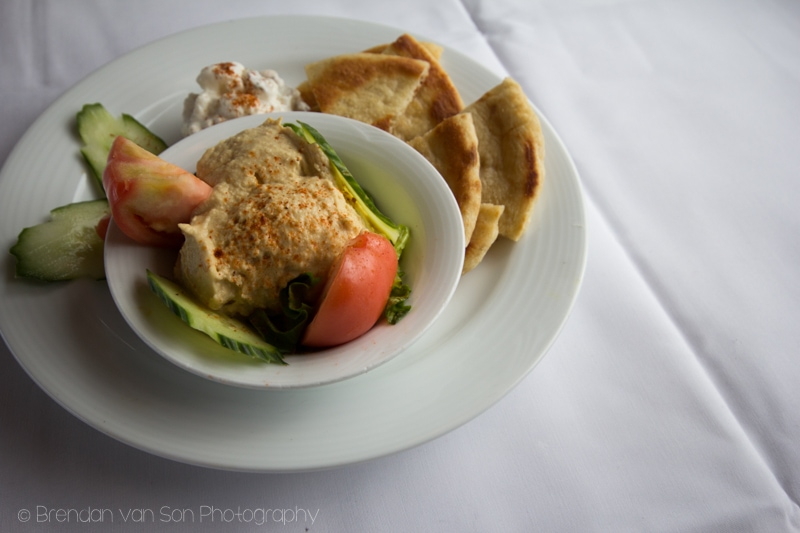 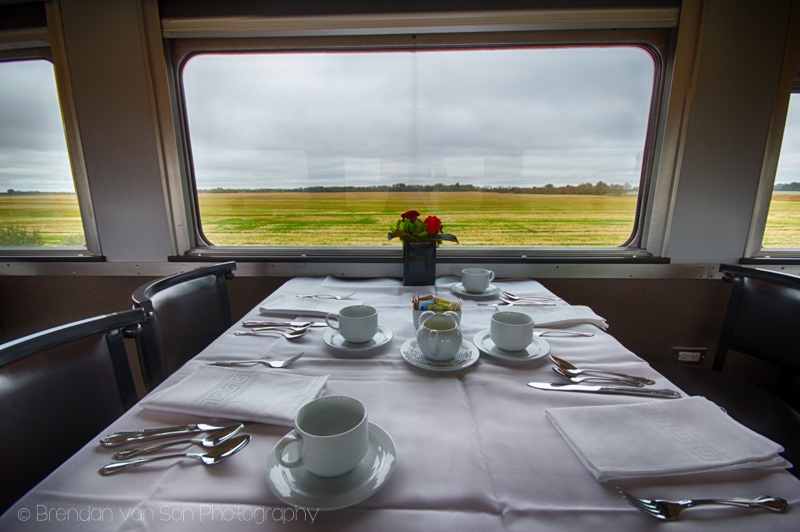 #7: Get Out of the Train Whenever Possible

When trains like the VIA Rail stop, you should be getting out.  Even if it’s just a 5-10 minute stop, jump off the train and do some shooting.  It’s the best way to broaden the variety of your images from the journey.  Capture the staff helping passengers, capture the train itself, and capture the little towns you stop in.  Jumping off the train for a couple minutes isn’t just good for your images either, it’s probably nice to grab a breathe of fresh air anyways. 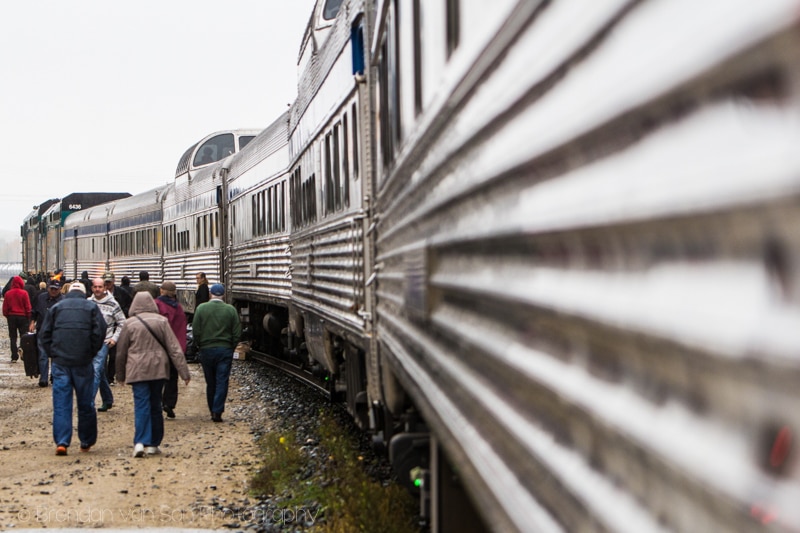 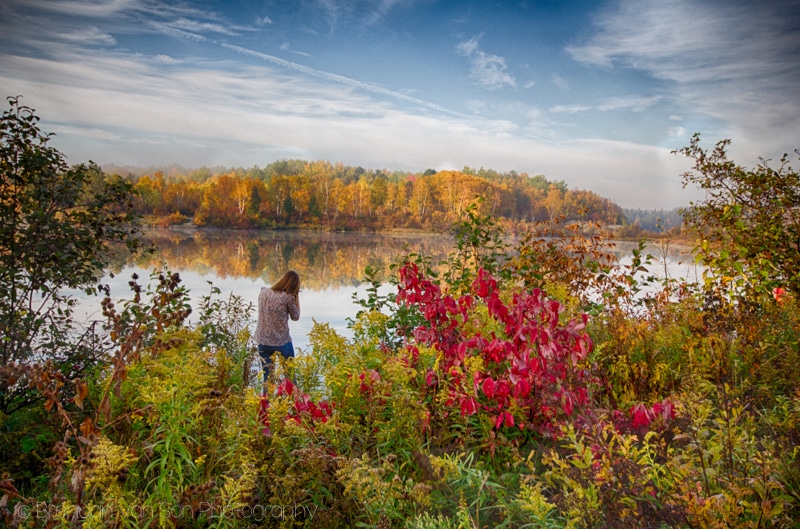 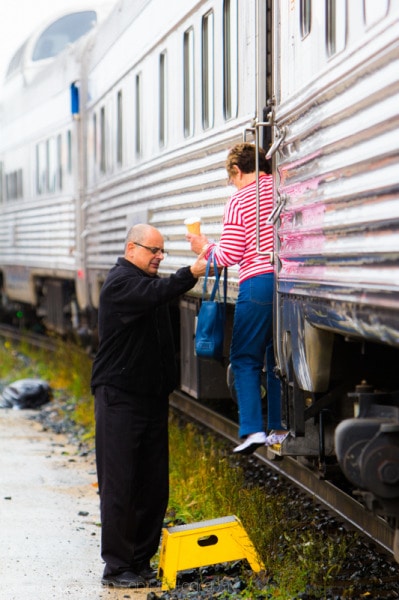 We can easily get so focused on the landscapes, scenery, and train itself that we forget about the human element involved in a train journey.  And, yes, I know it’s a bit difficult to take photos of people for some.  However, without capturing the people on the train, your journey’s images are incomplete.  Muster up some courage and ask people if you’d be able to take their photo.  Grab the staff, the conductor, and the passengers.  Hell, bust out and grab a selfie. 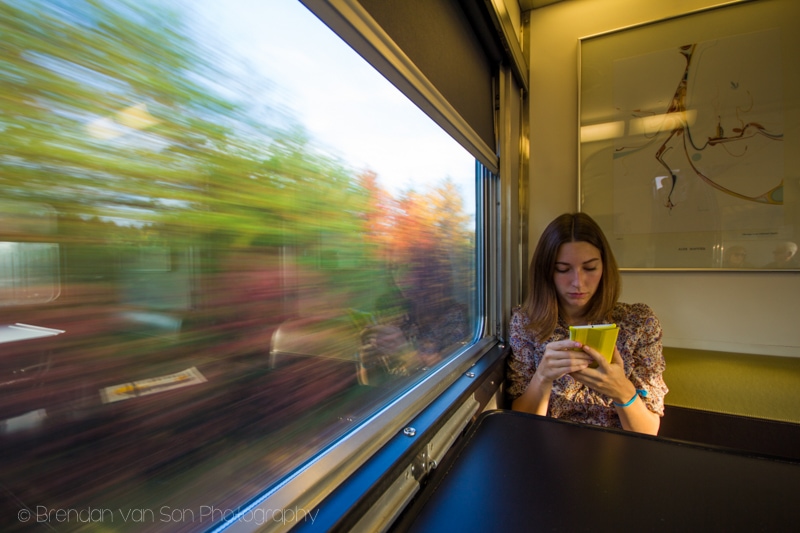 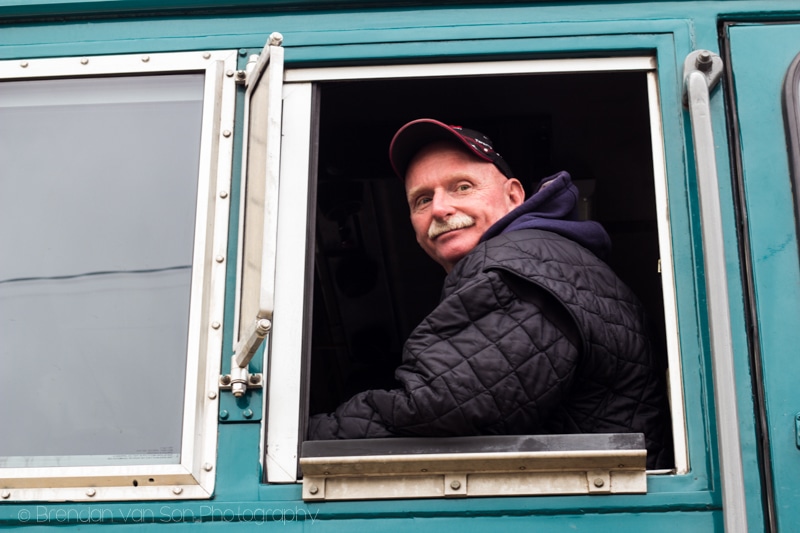 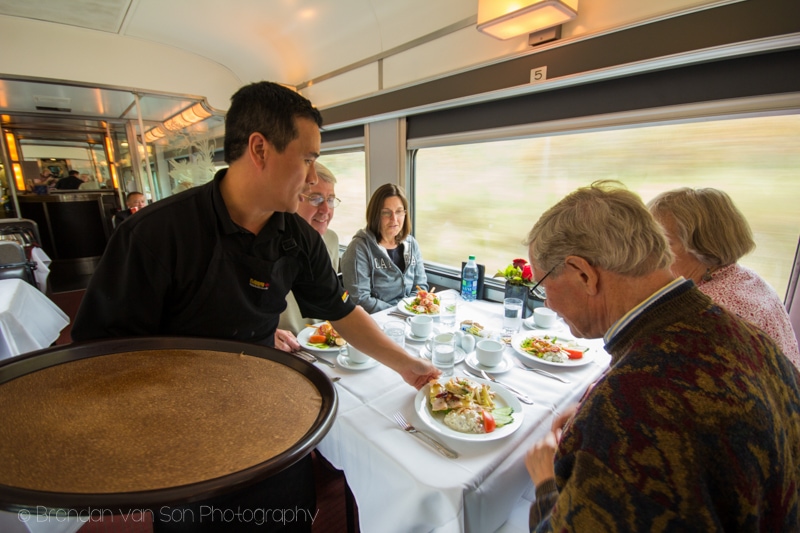 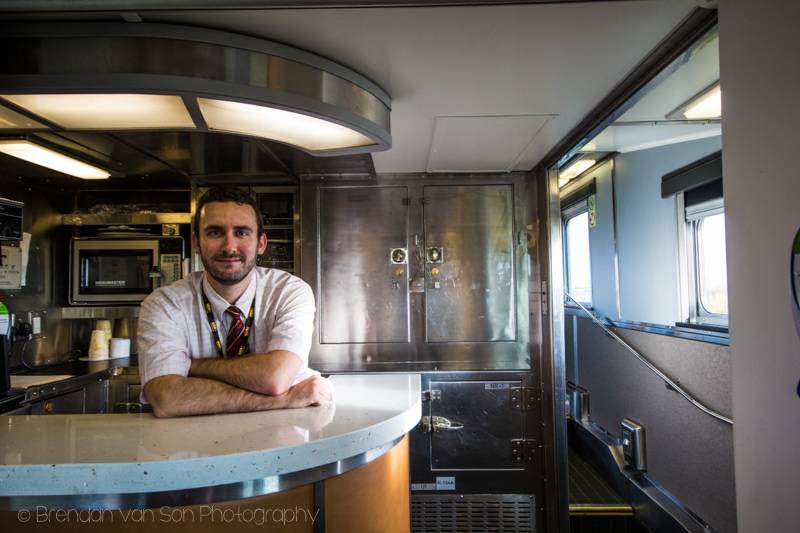 What’s Next on the Photography Blog?

I’m now in Western Canada for a while.  I’ve got a couple really cool projects coming up from here in Alberta.  I’ve also got a bunch of gear reviews and more tips and tutorials.  Stay tuned and subscribed.