I Learned to Cook in a Youth Hostel 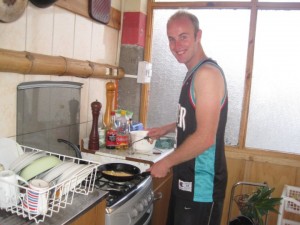 I Learned to Cook in a Youth Hostel
From the moment I left my house as an 18-year old I have been traveling. I haven’t always been hopping around the world. Sometimes I was on the run to University and cruising off on spontaneous road trips. I spent those nights sleeping in college dorms, run-down hostels, and the back of cars. Somehow of late I’ve replaced my noisy dorm rooms with three and four star hotels. However, this past week I found myself in my old stomping grounds of a youth hostel in Northern Chile. As the hostel owner gave me the tour of the kitchen I nostalgically remember that it was here, in youth hostels, that I learned how to cook.

In the world of backpacking hostels have become meeting grounds for people of all ages, and from all over the planet. People who spend their time hopping from hostel to hostel are generally open and almost always welcome passerbies with greetings of hello, in whatever language they may be speaking that day. Backpackers will are always willing to take the time to help out fellow travelers with hints on buses, sights, other hostels, and even with their culinary skills. 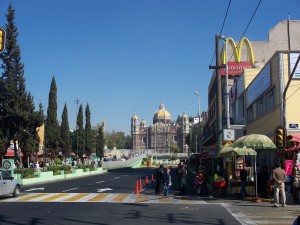 At home, eating dinner out at a restaurant provides us with the relief of wrestling with the kitchen processions of preparing a meal. However, when are on the road eating out becomes a hassle, which in many cases can even lead the weaker spirits to sprint towards the nearest MacDonald’s. On the road, there is nothing more relieving to see than a nice clean kitchen. And it is in these places that some of the most savoury and creative dishes are put together.
It’s easy to see how these culinary battle grounds can become international cooking classrooms. People from all over the world join together in this one spot to demonstrate their particular genius. The Italians are found creating pasta sauces out of just about anything. The Germans always seem to find a way to make quality meats. Almost every morning the Brits can be spotted consuming their traditional English breakfast. And for some reason the Aussies continue to spend their time trying to convince people of all the products they can spead their vile VeggieMite across. Canadians, like myself, will forever continue to introduce the poutine to as many willing and unwilling students as possible. The variety of the foods cooked here in youth hostels ranges from A to Z. 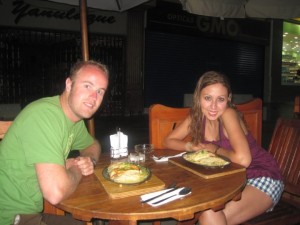 However, it’s not really the prepared meals that impress me. It is the resourceful cooking that gets me going to most. Some people can take a fridge full of leftover scraps left my former guests and transform them into a meal fit for a gown and bowtie ball. My all time favourite came from an 18-year old kid from London I met in Panama City who was trying to write a book called 50 countries on 10 dollars a day. I don’t think he spent a penny of his own money on food, although he did blow cash going to play the famous blackjack games of the Panama City casinos.  He would simply lurch around the kitchen and wait for people to toss something useful in the garbage, or pack their bags and move out leaving something of value in the fridge.

One night I watched in awe as he crafted two plate-sized pizzas out of left over tortillas, tomato paste, house basil and oregano, left over scraps of meat from my sandwich creation, veggies found deep in the crisper without a name, olives from an jar in the back of the fridge, and some Mozza cheese he had found but had to work around the bits of green and blue mould to get to. To top this off, he was set to wash it all down with a nice cup of red wine which was left over from the previous night’s festivities. Just before he started chomping down he said allowed to me “hmm, something is missing.” He then rose from his throne and rummaged through the cupboard where he managed to find a half used candle to light his mood. As I sat across the table from him eating my meticulously planned out meal which I spent an hour shopping for at the supermarket I was not only impressed but a little bit envious. 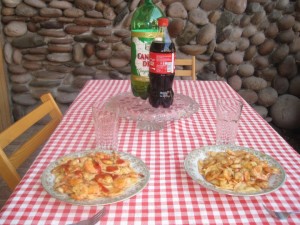 As we ate, I thought about the countless number of times in which I had been at home looking into my full fridge while thinking “I have nothing to eat,” and then calling out to have pizza delivered, when in reality I probably had everything that the young Brit had on this day, if not more. I took his formula with me when I left the next day, vowing to learn from his creative nature. And now, years later, thanks to youth hostels from Egypt to Guatemala I now know how to make, falafels, Peruvian ceviche, tortilla pizzas, and so much more; and I learned it all in a youth hostel kitchen.