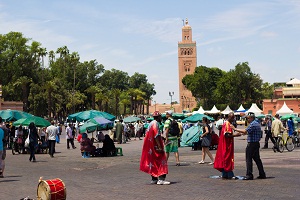 Letting my Imagination go to Work in Marrakesh

After constantly feeling stressed out in Fez, I have to say that I was a little bit apprehensive about Marrakesh. I wasn’t sure that I could handle being pressured, and often abused, like that again. I’m not good with crowds, I don’t like having to be rude to shake people off and I don’t like feeling like as if everyone is out to rip me off. Marrakesh was different though. The ancient city captured my imagination. It swept me away and made me feel like I was a child in a fantasy world. Marrakesh is a far cry from Fez and quickly became one of my favourite destinations.

The imperial city is such a powerful experience.  The street stream with the activity of racing scooters and honking taxis, the mosques sign hymns from atop their tall stone minarets, and the souks buzz with different sights, sounds and smells.  Across Europe there are advertisements claiming Morocco is a “rush to your senses”; the truth is that at times it feel like an all out war.  Each corner offers a new  draw.  One alleyway is lined with colourful spices that find a way to dance on the legs of the gentle air and tickle at your nostrils.  An enthusiastic vendor calls out in hopes of you taking a look at his product: a variety of herbal remedies, or sandals, or perhaps some beautiful carpets.  If you are lucky enough to wander off the main streets you’ll find the products being woven, stitched or tanned by hand.

Marrakesh’s greatest gift, however, is its ability to make one’s imagination run wild.  It’s hard not to feel like you’re a cast member in an Indiana Jones movie while wandering through the streets, and there is no better place to sense it than Jemaa El-Fnaa the main square of the old city.  Here you’ll find snake charmers, Sudanese drummers, food stalls, and pretty much anything else in between.  Of course, a walk through the square means the beckoning calls of over-ambitious salesmen and beggars.  But if you can somehow block that out you’ll find yourself a world away from anything you’ve ever experienced before.

I headed to Africa in order to escape the ordinary.  I wanted to find myself feeling as if I had been dropped off in the middle of an alien world. I wanted to feel uncomfortable.  I needed to feel challenged.  But most of all I had an urging desire to be somewhere that allowed my imagination to be swept away like a small child in a sandbox.  After years of travelling, I began to worry that I had lost many of those feelings of being in a magically foreign world.  However, I found that feeling again for the first time in Marrakesh.  As I will soon find out, I’ll be having countless more of these experiences in the weeks and months to come.