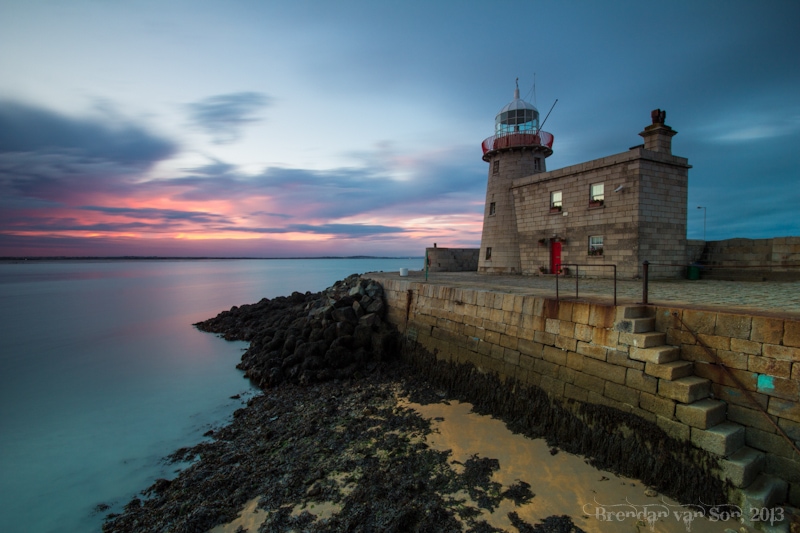 Just Some Photos from Ireland

After spending time in Cork, then partying fairly hard with some fellow travel bloggers in Dublin, I set off on a photo tour around parts of Ireland with How to Be a Travel Writer.  After a couple last minute dropouts from the workshop, we were a tiny group, but it made it much easier to actually just go out and shoot and explore.  I probably only hit the shutter about half the amount of time as I normally would on a photo shoot, but that’s how it goes when you’re teaching.

Anyways, the photo tour of Ireland started in the capital with a couple shoots in the downtown area.  We then headed out to Howth, which is one of my favourite places to photograph on the planet, and a place I’d gladly go back to ten or fifteen more times.  Then, to get a little bit obscure, we headed across Ireland to the west and the city of Limerick.  Though Limerick is certainly rough around the edges, it’s that grittiness, combined with some pretty serious history, that made it a great place to shoot.

Below are the photos from Ireland from this 2013 trip.  I’m sure I’ll be back shooting this country again, because it really is spectacular.  Enjoy! 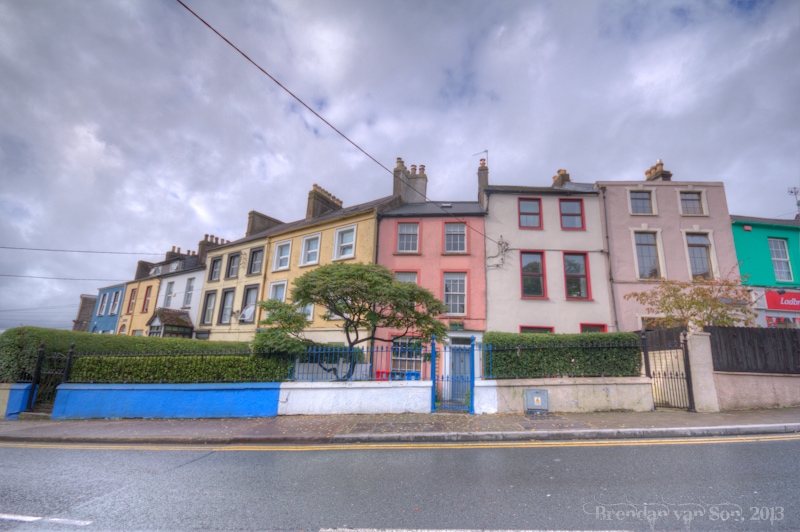 My first stop in Ireland was the city of Cork. I didn’t have good weather, but I had enough cloud to grab some HDR shots like this one. 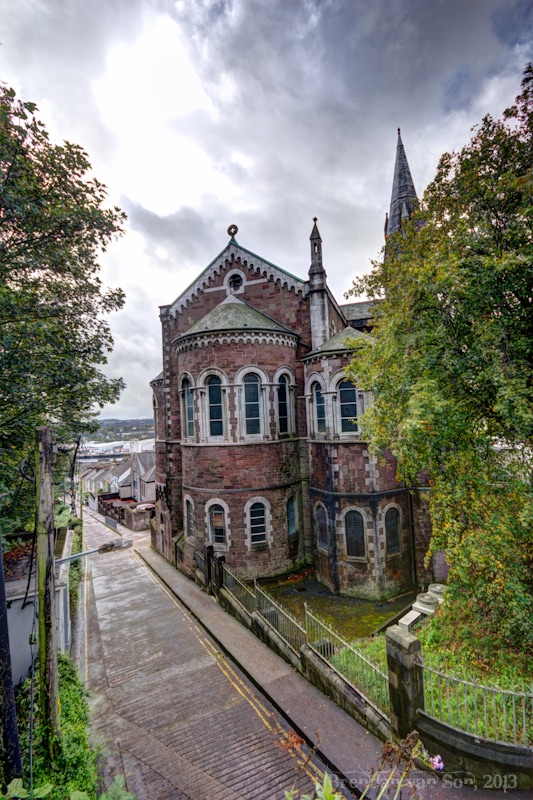 I pulled my camera out of my bag while walking to the bus stop for this shot. I loved the building, although the light was way to harsh for a photo that didn’t look too over-processed. Still, I like ti. 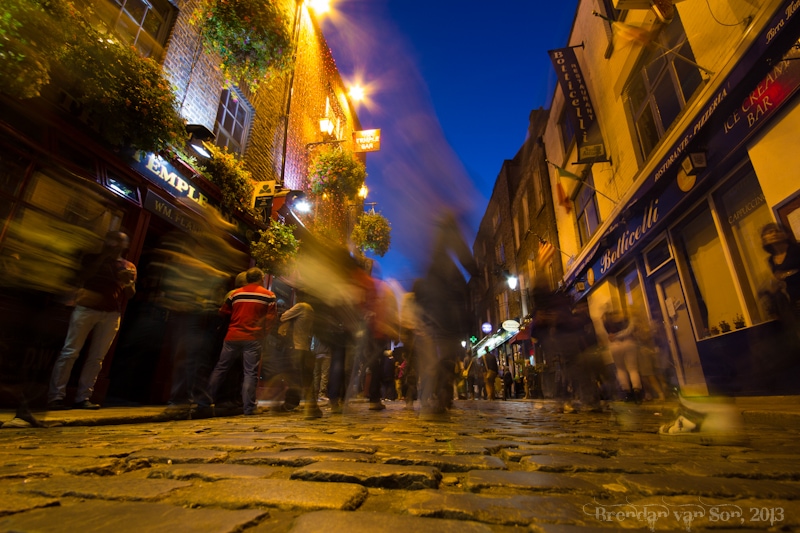 Down in the party zone of Temple Bar. Don’t get annoyed by people in your photos, use them to your advantage 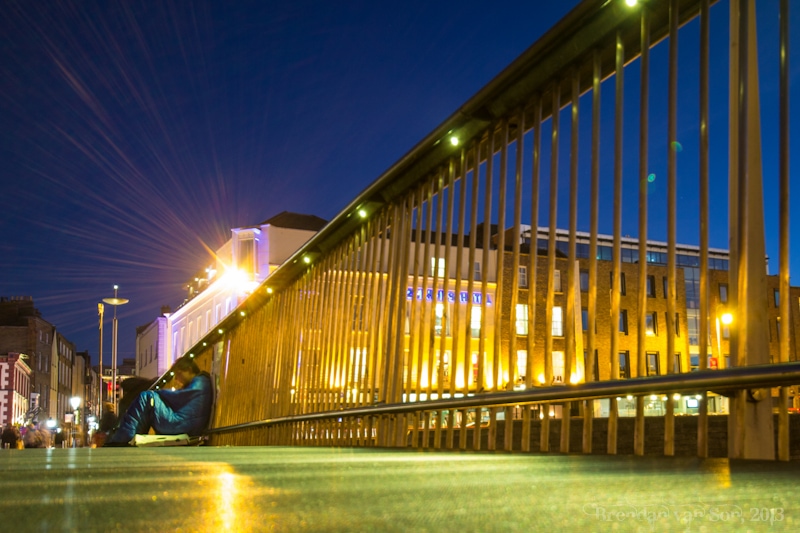 I tend to avoid subject like this, but the light and lines were too good not to. Be considerate when taking photos like this, as considerate as you can. 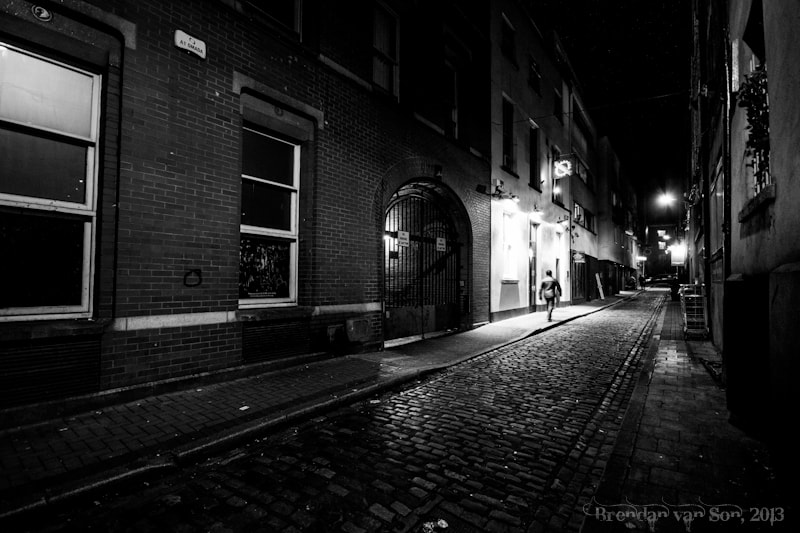 My rule of photography is once the light goes from dark blue to black skies, my photos go to black and white. I like how this photo came out from a Dublin street. 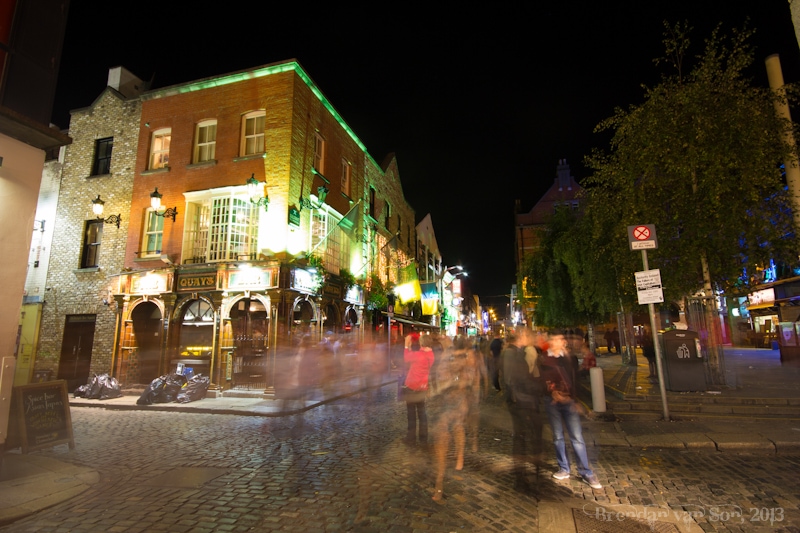 Back in Temple Bar, again taking shots of the crowds. 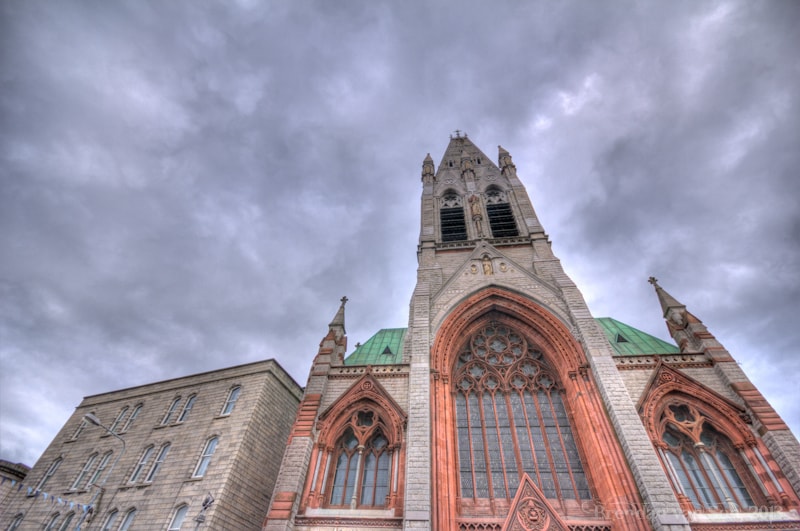 I don’t shoot a lot of HDR, I prefer a more natural look. However, it is fun to play with, you can’t deny that. 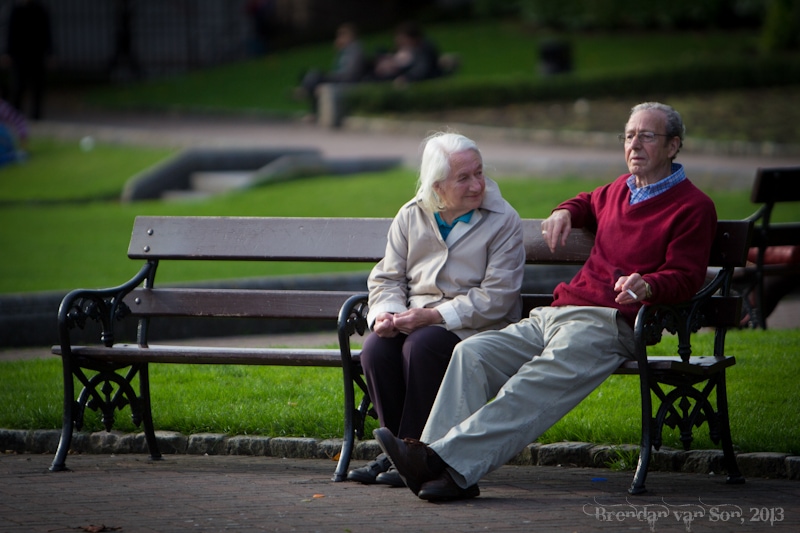 Another good rule of photography is shoot old and young things. An old building, a flower budding, a baby animal, or an old couple. They always make for good subjects as this couple in Saint Patrick’s Garden were. 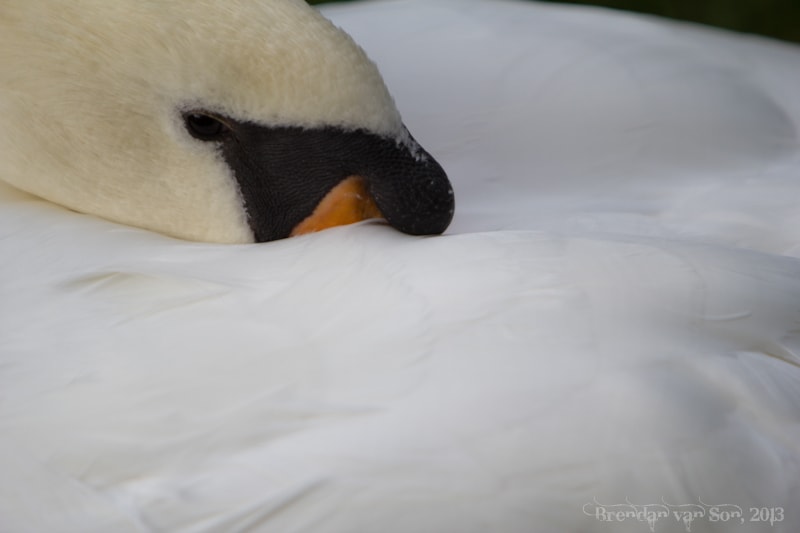 With wildlife, shoot the details if you can. I saw this swan in Saint Stephan’s Green curled up so I shot for details rather than getting the whole bird. 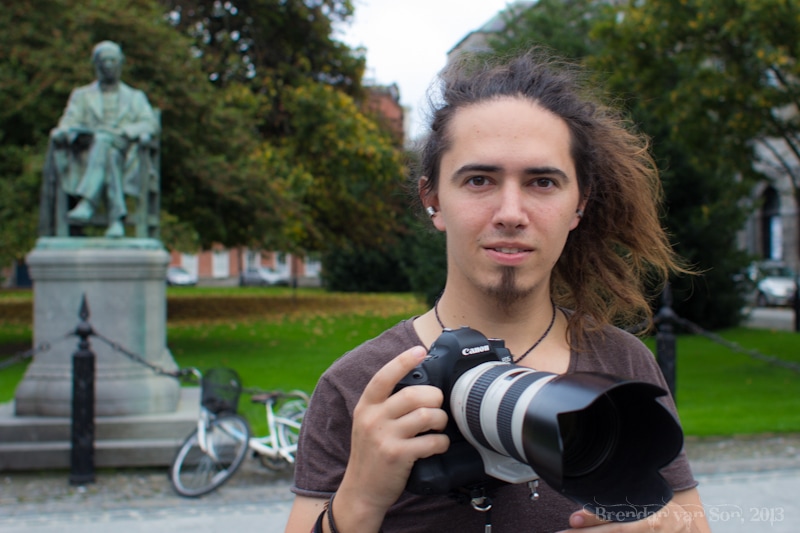 “Hey Karl, Nice to see ya.” One of the participants in the photography workshop. 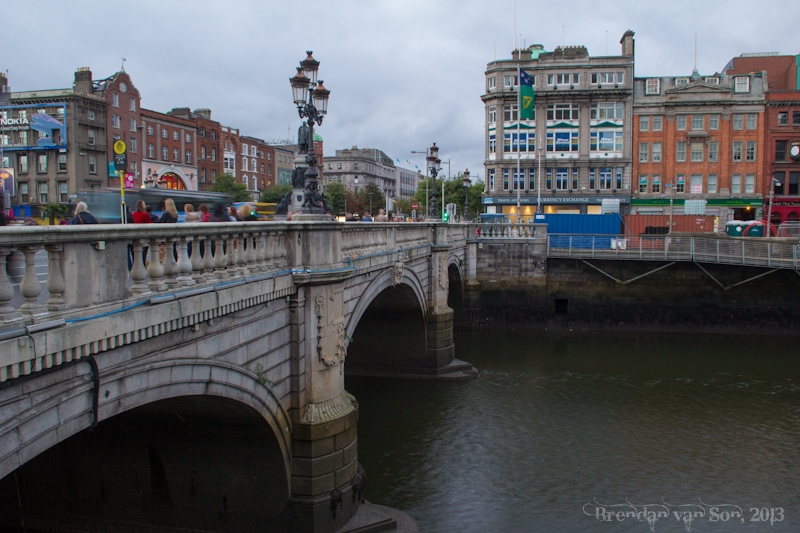 I photographed this bridge about 2 years ago. I was amazed that the two photos almost had identical light, 2 years apart. Love this scene. So colourful, yet gloomy. 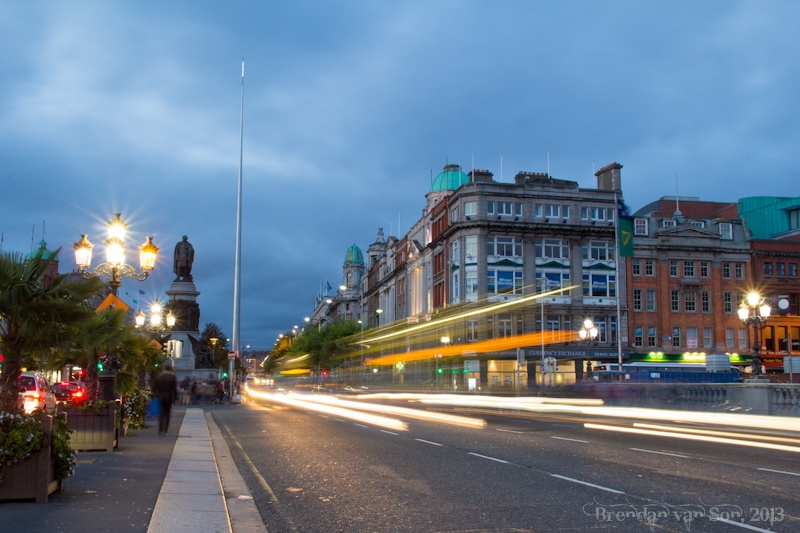 For cities, I shot the blue hours, and I look for light or water. This light trail was created by a moving bus. 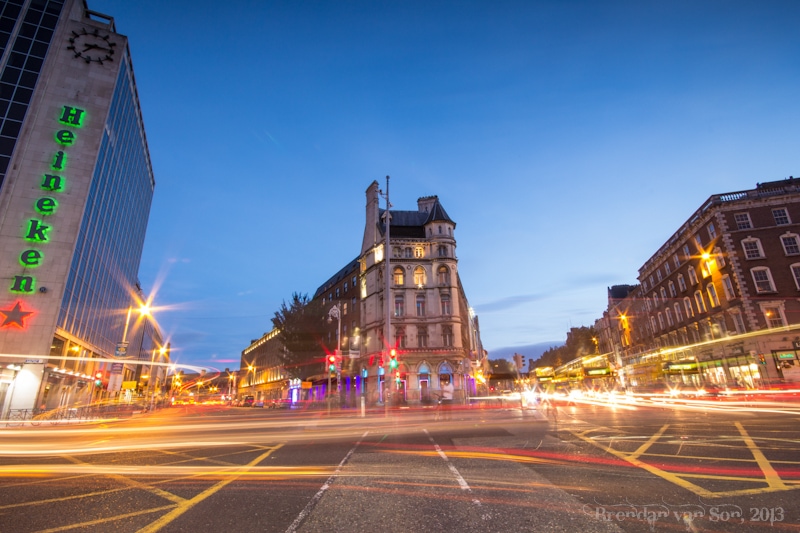 This is a scene I didn’t shoot last time I was in Dublin. I don’t know how I missed it, since it was essentially right behind where I was shooting. Sometimes, you just need to explore with your eyes to find a cool scene. 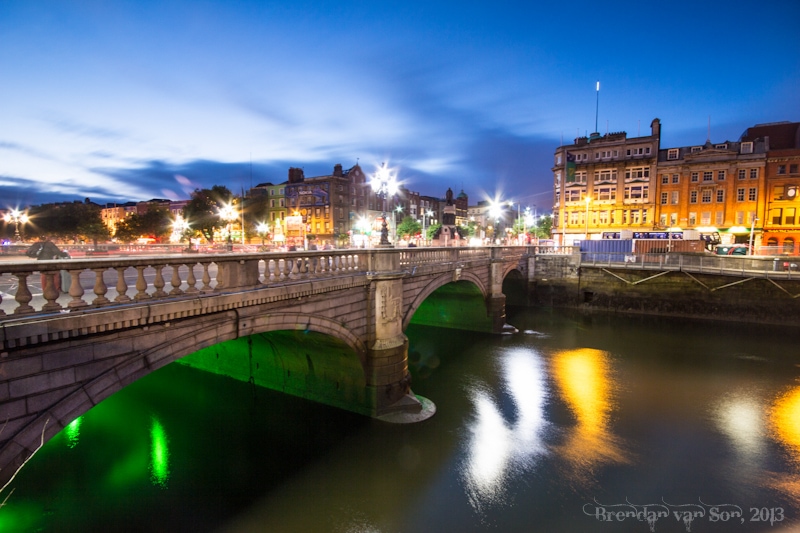 Another shot of that bridge later in the night. Amazing how different lights can make the same subject look completely different 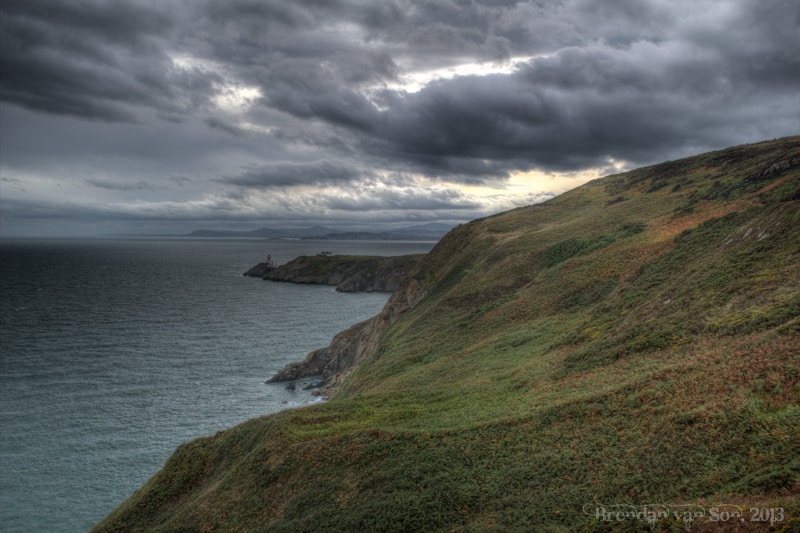 This was shot out along the cliffs near Howth. How can you not like these Irish landscapes? 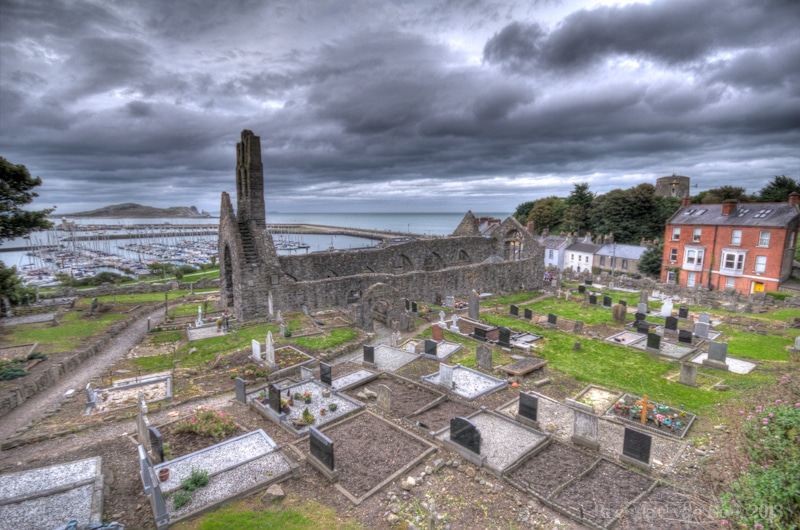 I went for an HDR shot over the cemetery in Howth. I really do like HDR on cemetery scenes because it adds more of an air of drama/ 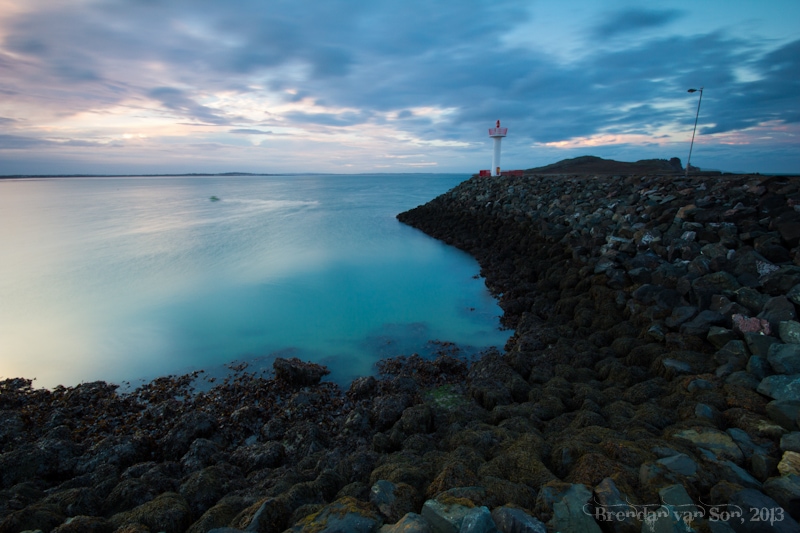 I shot this lighthouse 2 years ago too. And I always wanted a slightly better photo than last time. This one is good, but wait a couple images. 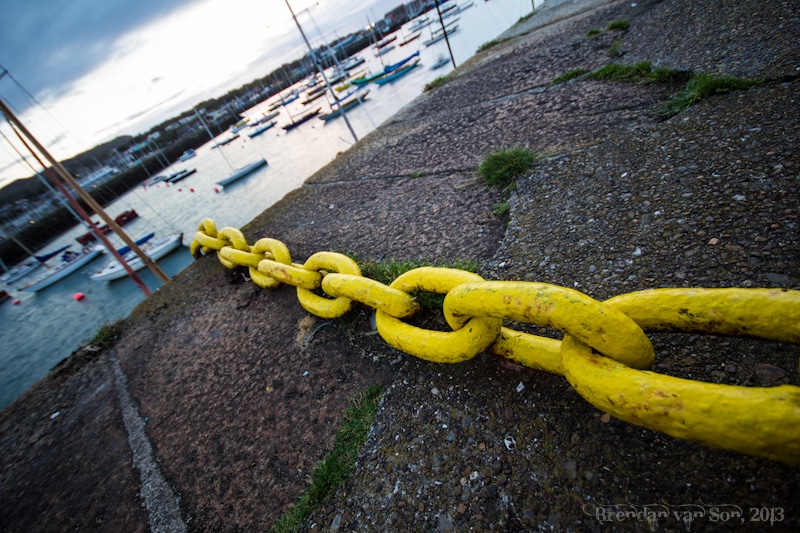 Again, shoot the details. Sometimes you’ll be so focused on capturing the whole scene you’ll miss interesting lines and subjects like this. Look for details in everything. 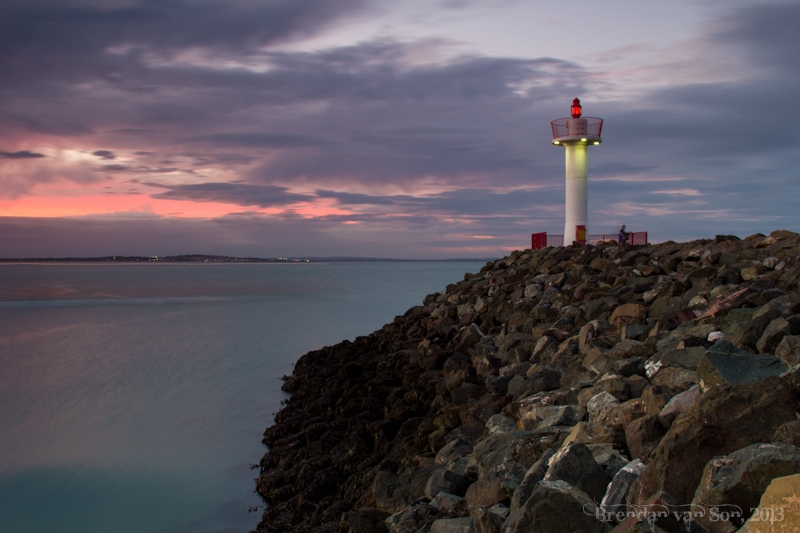 This is the shot I was trying to recapture. I got it this shot using a gradient ND filter. 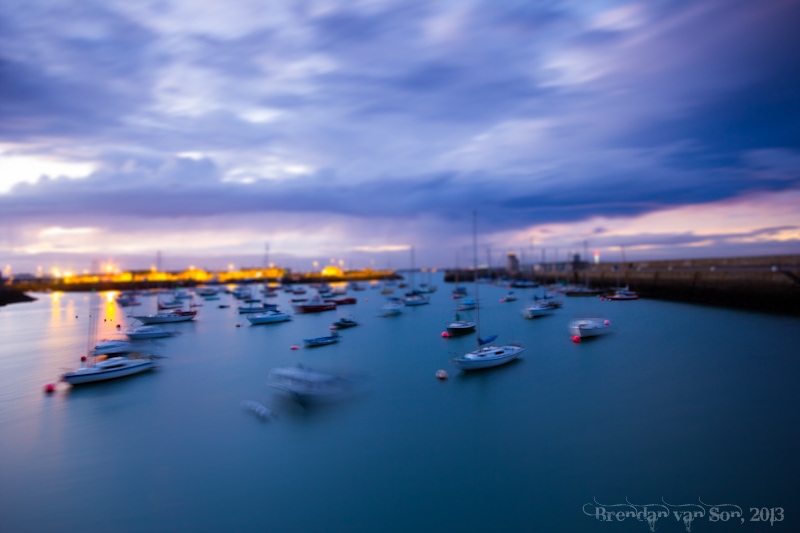 I loved the light in this scene so much I almost couldn’t pull myself from it. 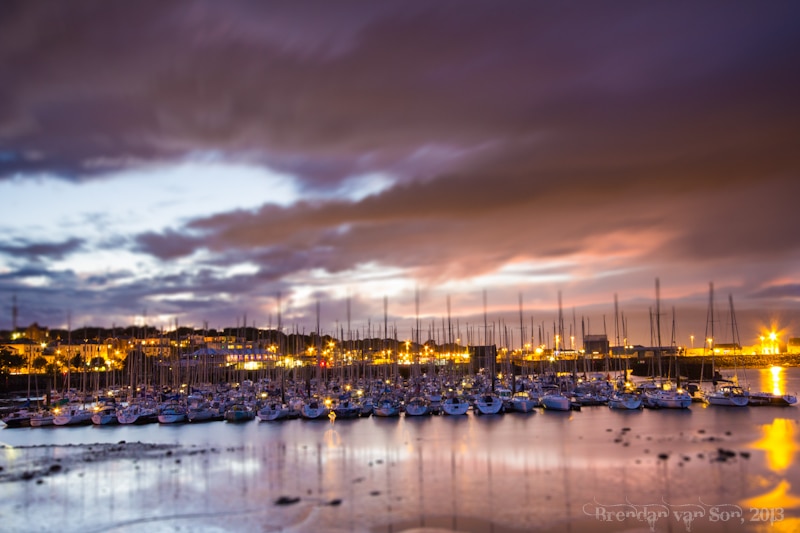 This is another one of those photos I got last time in Howth but wanted to make better. I like how it turned out. 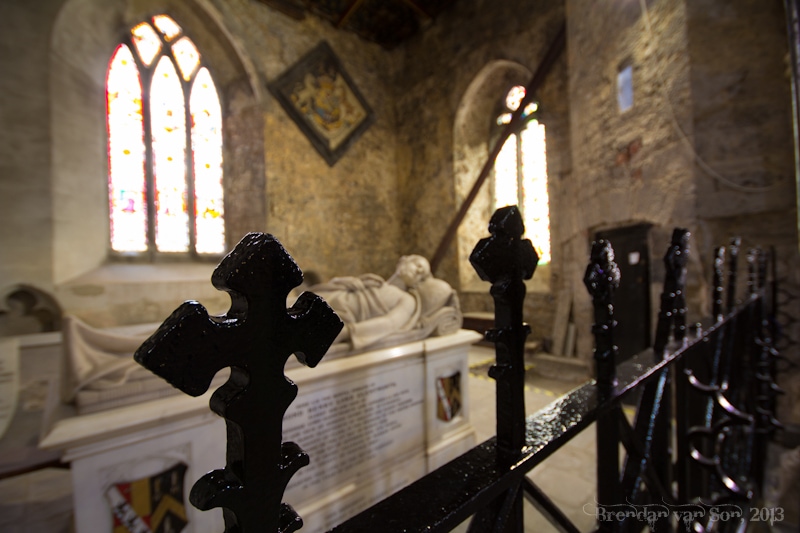 From Howth the photo workshop headed down to Limerick. I shot this from St. Mary’s Cathedral. 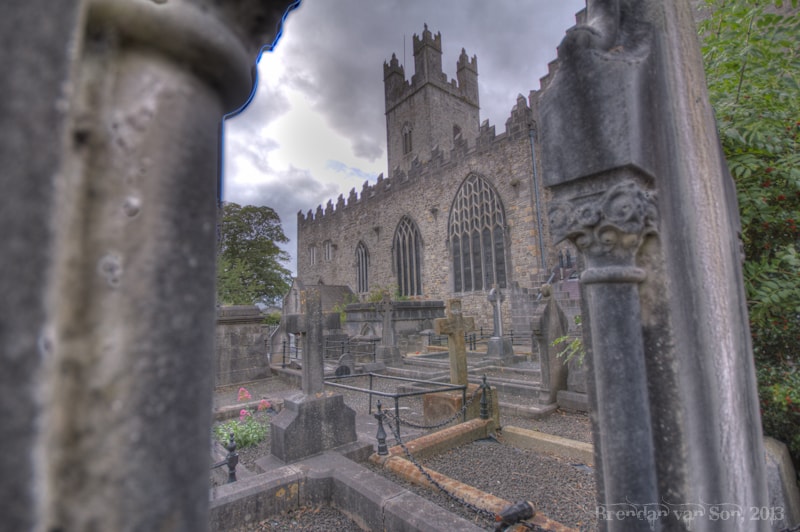 Again, I love the mood of HDR in cemeteries. 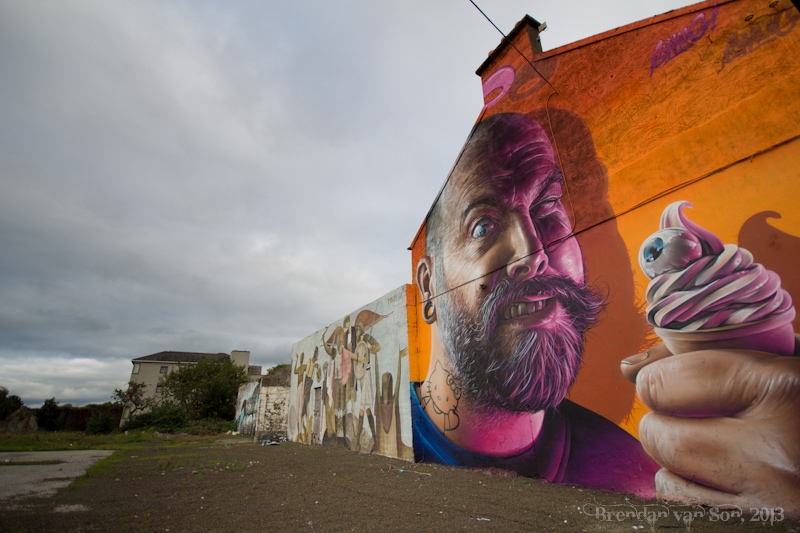 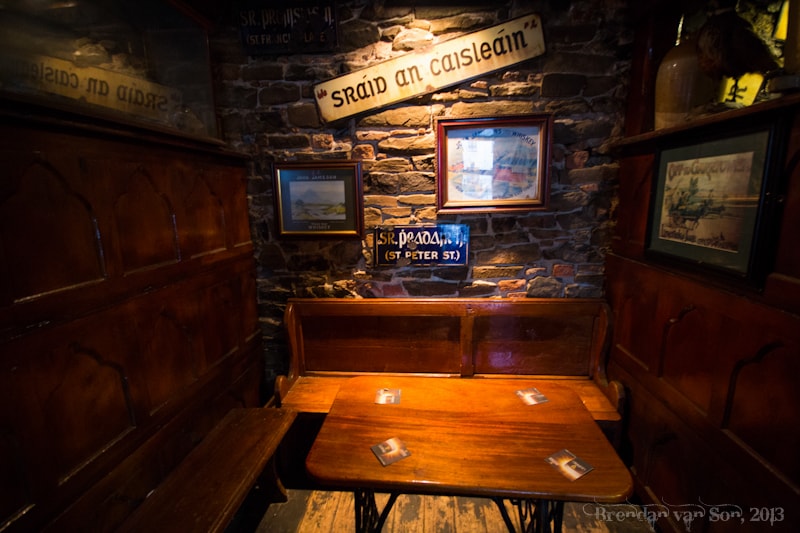 Random pub waiting for the right light in Limerick. 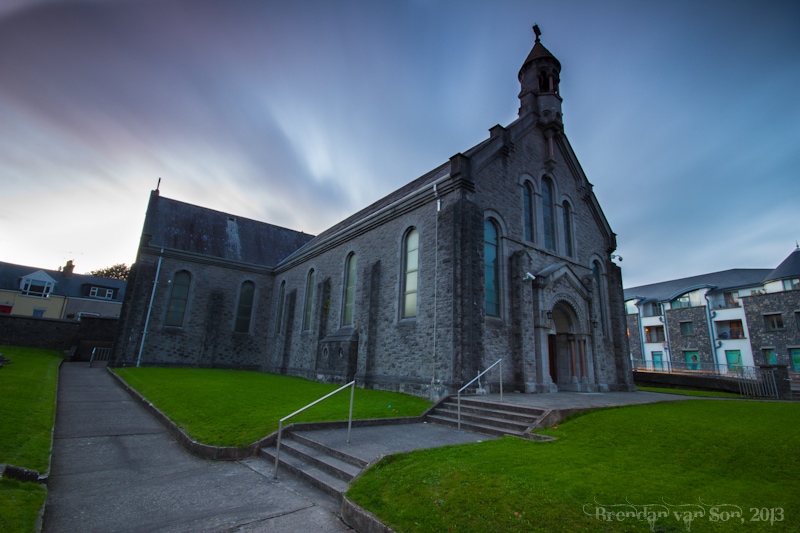 Great light here in Limerick on the last night of the photo workshop. 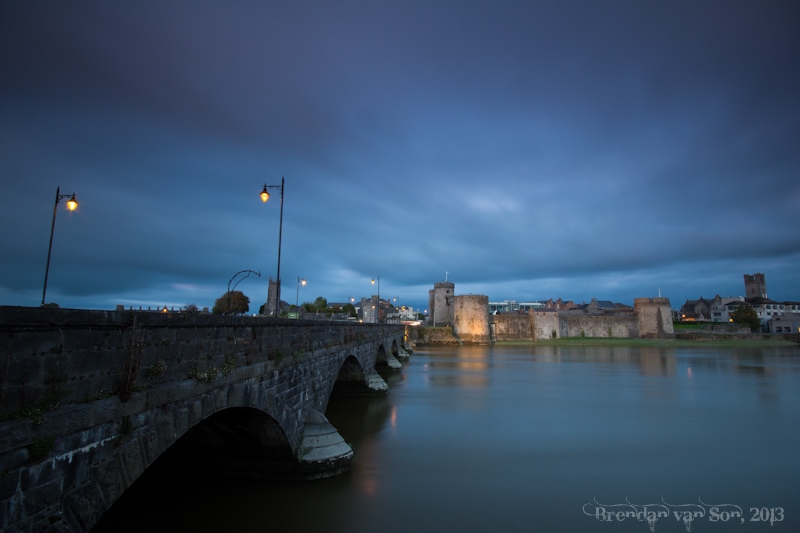 The castle in Limerick is the main feature of most photos. I’m a fan of Limerick, though few people get down here.

That’s it from Ireland! See you next time!