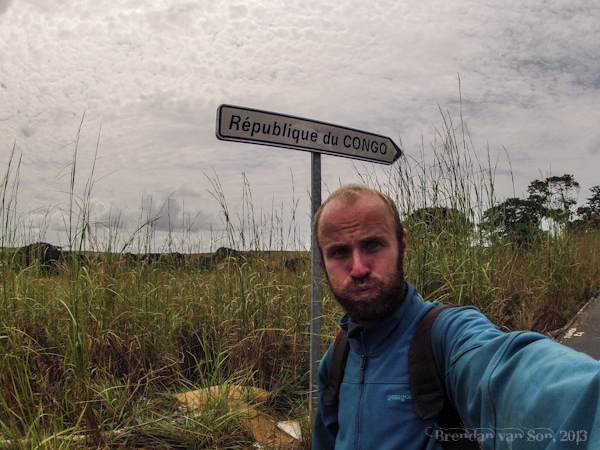 Damn you Sand! From Gabon to the Congo Overland

Overlanders talk about the road from the Gabonese border into the Congo as the worst road in Africa.  So I obviously wasn’t too keen on the fact that my day wasn’t going all too well to start.  I certainly wasn’t keen on finding myself where I am now, laying down on my side, Ann Murray laying on top of me, sand everywhere. I left Leconi bright and early this morning to get a jump on the famous road to the town of Okoyo, Congo.  The Congolese immigration stamped my passport and I was through the administrative border by 8am.  By 8:15, however, I found myself in the bottom of a valley, hills on both side cursing the flat tire I had just incurred.  I had no choice, I had to push the scooter 4 kilometers up and over the hills to the nearest village.  Of course, I was accompanied by the warmth of the equatorial sun.  At least I still had tarmac at this point. In the village, I plopped down my bike and hid in the shade while a couple fairly incompetent – though obviously more competent than myself – mechanics worked on my back tire. Over an hour later, and 3 failed attempts to leave, I finally made it to the official border.  Of course the immigration official was off in town, and I’m told to sit and wait.  It wasn’t until 1100am until finally left. The road into the Congo isn’t shy, not does it try to mask what it is.  From the smooth asphalt of Gabon, the road drops immediately to a buffet of sand, sand and sand.  This famous route is featured by tire trenches of at least a foot deep and sand so fine it dances with just the rumble of a nearby engine. 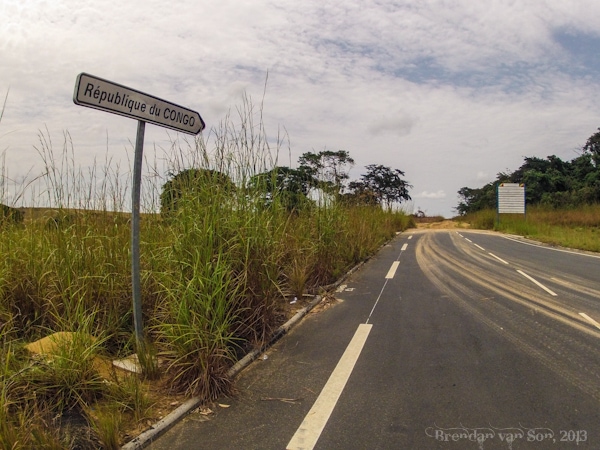 As soon as Anne Murray’s front tire hit the sand I knew I was in for a bit of a challenge.  But I never realized that 2 hours later, and only 20 km down the road, I’d find myself laying down where I am now with my will shattered and contemplating just lying there until someone picks me up or the vultures begin to feast. I haven’t left 2nd gear the entire road thus far, I’ve spent most of the journey pushing the bike my foot with my now weary legs.  Some sections have been so bad that I’ve opted to instead crash through the brush and shrubs off-road where there’s no path at all.  At a couple points, I lose the road completely, and I don’t really care that I do.

Now, Anne lay squeezed between my weary knees and I know I have no option but to move on.  I push Anne Murray from off my leg and again mount my trusted stallion.  She’s falling apart.  She is being held together by duct tape and love; but really, what else does one need. A village appears and I stop to add fuel, and a congregation of locals encircles themselves around me. They want to know where I’m from, what I’m doing, and why the hell I would drive a scooter on this road.  My shirt is drenched in a solid stain of sweat and as I re-pack my belongings to the broken luggage rack on the bike’s back, I really don’t want to continue.  A local doesn’t help my spirits telling me that I’m still 70 kilometers from Okoyo, where the road is said to improve, and it’s sand the entire way. Just down the road, I’ve decided to give up again.  As soon as I get down this hill I’m going to find a tree and set up my tent for the night.  I’ve only done 25 km, but I can’t do more.  My bones are shaking, my muscles are cramping, and my will is completely shattered.  But as I descend the hill, a couple houses appear and something I didn’t expect: tarmac. A military official I meet in town tells me that the road is improved for the next little while, that the worst is over.  A combination of pavement, gravel, and hard packed dirt turn my mood, as do the Congolese people.  Every village I pass, each construction crew I skim through, and every motorcycle that goes by does so with a wave and a smile.  Often, the waves are two-handed as if the simple wave isn’t welcome enough. I love the Congo.

1600h I roll into another town, sand all over the road once again.  A customs official laughs at me and tells me the next bit of road is complete hell; sand shipped direct from Cancun, I’m sure.  Two hours later, I’ve fallen 4-5 more times and felt like giving up a couple more than that. I finally arrive in Okoyo, too weak to wave back at the children along the road.  The town, of course, is built on sand and the streets are lined with trenches as deep as World War I.  But ahead, there is tarmac. I need to sleep, it’s nearly dark and I’m out of fuel.  The gas attendant tells me there’s no hotel in town and that it’s another 70km, on a paved road albeit, to the next town with a hotel.  I can’t do it.  I can barely open my eyes.  I’ll drive down the road, drive into the ditch and set up my tent in the bush, in the now pouring rain.

Just as I’m about to set off a man comes over and offers me a hand.  He’s a Lebanese man working in the area, he has a spare room at his place.  Unquestioning, I follow him.  His apartment is simple.  We spend the evening watching Turkish soap operas which he translates for me.  We eat friend squash, plantain and bananas.  I can hardly hold my eyes open, and I’m in bed by 830pm, and not a minute too soon. Through the night I toss and turn as thoughts of sand and slipping tires haunt my dreams.  I’m awoken by a thunderstorm complete with lightning so bright it lights the room through the blinded window. The rain continues into morning and I’m met in the kitchen by the Lebanese man pouring me a coffee.  I add three heavy spoons of sugar into my coffee, and ask the man how much I owe him for the food, room, and kindness.  He refuses anything and I set off onto the pavement from Okoyo to Oyo. Rich savannas surround me. An impala races across the road.  It isn’t until this moment that I’m struck by where I am, and where I’ve been.  But I’m struck most by the kindness of the Lebanese man who spotted a weary traveller and invited him into his home without a question, without hesitation, and with nothing but compassion. Of all the things I’ve learned in Africa the one thing is love.  Maybe not love in the traditional way that a husband loves his wife, but just love for mankind.  Whether it’s a child waving at the side of the road from a village, a group of mechanics offering you a seat in the shade as they work on your bike, or someone letting you into their home, there is more love in Africa than anywhere I’ve been.  And despite the tough roads, the long distances, and the various other challenges, when I leave Africa someday, I’ll have to thank it for showing me what love really is all about.  Love lacks judgement, but demands respect.  But most of all it is a belief; a belief that mankind is inherently good and can be trusted.  This lesson learned is worth any hard day of travel.