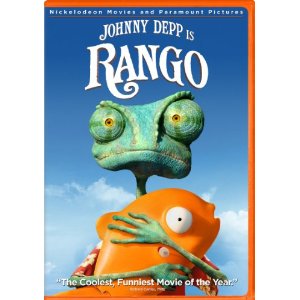 I sat down last night and watched the movie “Rango”.  Yup, that’s right, I watched a kid’s movie.  Why did I, a rogue scholar, journalist, and man of 27 years, watch a movie made for children?  Well, for one I heard that Johnny Depp would be starting as a lizard which meant that for once in my life I would be more attractive than him (or so I thought).  But also because, well, I like children’s movies.

As I was watching the movie, I analyzed it with the same depth and passion as I would any Oscar nominee.  What came to mind was that Rango, the thespian lizard, although forced into travel, learned many of the same life lessons we all havel.  Here are some of those lessons.

Rango flies out of his comfortable life and into a world of completely unknown.  He may have thought he was happy in that comfort zone, but it’s not until he gets just a little push out of it that he realizes that maybe he wasn’t completely happy with the person he was or the way his life was going before.  When Rango bounces out of the car in the opening scene and is broken free of his cage his life changes.  Once outside of his comfort zone he is forced to face things and situations he would never have before hand.  In much the same way those of us who travel are thrust into situations we’re not used to dealing with, these situations ultimately make Rango a stronger person, although he might not realize it at the time.

2) Fitting in is hard

In the world outside our comfort zone it is difficult to fit in.  The world is such a huge place and everyone seems to have different societal norms and values.  In travel we deal with what Rango dealt with – wandering into the strange town in Rango’s case – on a near daily basis.  We notice right away that things are different than we’re used to.  Our bodies and minds tug at ways we can fit in.  For me, I remember noticing once that I started to plug in the semblance of an Irish accent after spending a week travelling along side an Irish group.  At the end of the day though, we learn that we don’t need to fit in and that being different is actually something to be treasured; it’s special regardless of who we are.  As the band Taking Back Sunday once said so eloquently “you only feel the jet lag if you’re trying to fit in.”

3) You can be whoever you want to be while travelling

Rango was either scared to show who he really was or unhappy with who he was, so when he arrived at the rough and tumble desert town he decided to be someone else.  When you’re travelling, people don’t know who you are, so you can chose to tell them anything you want.  It is usually this point in time we realize who we really want to be.  Rango puts on an act as a tough guy, so maybe he wishes he were more bold.  Travel has a way of allowing you to start fresh, no one knows who you are so you can really be the person you’ve always wanted to be.

4) Being yourself is usually the person you want to be

Contrary to the previous lesson, we usually find out that we don’t really want to be someone else.  We want to be ourselves.  In fact, we usually realize that it’s not while we’re travel that we’re pretending to be someone else, it’s at home in our comfort zone.  At home we spend so much time molding ourselves into the person that we think others want us to be that we often lose touch with who we really are.  On the road, we have a great opportunity to realize what and who we really are.  We also have the opportunity to bring that person home with us.  It’s not a case of “finding yourself” its more of a case of coming to grips with the fact that you’re ok with the person you are.

5) You can’t walk out on your own story

The beauty and the challenge of travel, and life in general, is we all know that we have a story to complete but we don’t always know what that story is.  When people travel for long periods of time they often realize what that story is, what their life’s desire truly is.  I know that personally I tried to walk out on my own story on a couple occasions both times doing so thinking that I was doing what I “should” do.  However, at the day we usually realize that what we should do is follow our life’s true desires, or we being to resent the life we’ve chosen even if it’s not all bad.  It’s not destiny to follow what your heart tells you to do, it’s common sense.  Similar to the previous lesson, I think it’s also becoming comfortable in realizing that following your life story is ok, even if it isn’t a normal story.  Rango’s life story might not have been what he thought it was going to be; but when he realized it he knew with conviction what it was he had to do, perhaps for the first time in his life.

I claim these to be lessons learned through travel, but the thing I’ve learned most through travel myself is that you don’t need to learn these things on the road.  Yes, travel pushes us out of our comfort zone and allows us to come to grips with these lessons, but the truth is we know all these things before we travel, sometimes we’re just to scared to admit it.  We essentially create our own cage when we don’t do what we really desire.  When I think about my life, and how I got to where I am, I always knew that this is where I wanted to be.  I credit travel for opening my eyes to that, but in reality I knew it all along, I was just to scared to admit it.

About 1000 days ago travel bumped me from the caged I was comfortably sheltered in, and I’m glad it did; just as I’m sure Rango is glad he was bumped from his.