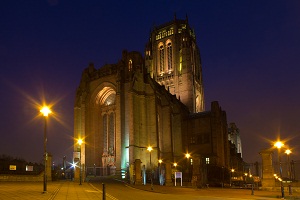 Arriving in Liverpool via the bus my first thoughts were that I was going to suffer from the same feelings that I had in Manchester.

However, as I followed the map towards Embassies Hostel, my home for the next few days, I started to engage with the energy in town. The massive tower of a cathedral peeks its head from over the Victorian houses that sandwich together along the street recently soaked by a shower. A young, university population stands on the sidewalks chatting about the latest gossip and energetically discussing the upcoming Liverpool/Everton match.

My feet take me first to the Cathedral, whose halls are so enormous they impose a sentiment upon you which makes you feel like you need to be as quite as possible. Intricately designed stained glass windows allow a seeping light to shine through and tickle the perfectly carved stone walls. Along the sides of the cathedral a boy stands on the tip of his toes to light a prayer candle with his father, I can’t help but smile.

I scamper through the center of town, and reach for the docks that line the waterfront. For the most part, I am not one for museums unless they are hands-on. I generally skim the information and look at the displays from a distance. But as I go through the naval museum I realize that some of my ancestors likely came through here from Scotland on their way to Canada. I feel powerfully tied to Liverpool somehow, even without this realization.

My curiosity presses me further into the countless museums of the city.  I reach the slavery museum, a somber look at a history I have somehow become indirectly tied to through my studies of the Americas; through my visit to Haiti. A group of French students laugh as the race through the exhibits, I read every word. I pull up a seat at an audio display and press the screen until it brings me to the Creole sounds of a famous Haitian song. I can’t help but be moved by my experience here.

As the blue of the dusk sky begins to chase away the day, I set the sights of my camera lens on the buildings of the historic waterfront. The calm of the evening is only interrupted by the occasional jogger, a gust of wind, or the sound of my shutter. The sky is painted a light purple, before slow fading into a night black. The contrast is magnificent and the mood relaxes my jaw and twists a smile.

I pack up my gear and make my way towards home.  As I do, I walk past an old couple looking out on the water.  They look out at the lights across the water and the old man releases his wife’s hand to pull a camera from his pocket.  He holds the camera as far away from his eyes as possible and snaps the trigger.  The result is a fuzzy image of a flat lighted horizon.  He shows it to his woman and she smiles.

“Wow,” she says with a smile. “It’s really beautiful.”

A reminder that it’s not the image that’s important, but the moment behind it and then sentiment in the heart of the person pulling the trigger.  My day in Liverpool gave me exactly what I needed, a little bit of perspective. It’s not the mood of photo I’ll remember when I look back at the images years from now, but the mood behind the camera. I’ll remember the mood behind the camera in Liverpool for a long time to come.