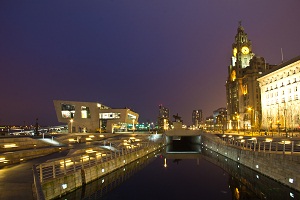 Liverpool Waterfront: Photo of the Week

After my firm declaration that Manchester wasn’t for me, I came into Liverpool with low expectations.  I didn’t expect to be dazzled, I wasn’t really into The Beatles, and I hadn’t really heard anyone’s reports on the city prior to visiting.  I wasn’t shocked that I really enjoyed Liverpool, but let’s just say that I was pleasantly surprised.  Moreover, I would have never expected a city like Liverpool to be photogenic.  However, of all the places in England I think I enjoyed shooting Liverpool more than any other place.  Between the cathedral, Chinatown and the old docks I could have easily spent a week shooting different scenes.  However, of all the places that I shot, I think that my favourite was the historic waterfront.  I loved the contrast between old Liverpool architecture in buildings like the Liver Building and City hall and the new style chic buildings like the Liverpool Museum.  The photo below is just a snapshot of the type of images I stumbled across in Liverpool.  Over the next week there will be much more to come, so consider this a teaser.

Technically there was really nothing special to this shot.  I set the camera up on the tripod, shot with a narrow aperture and used my wireless trigger to shoot this image.  What I do have to say about the shot that’s important is the planning.  I got down to the waterfront about an hour before the good light.  I planned where the sun would set, and where I was going to capture a certain look where.  In doing this, I made sure I made the most of the short “golden hour”.  Had I not planned, I might have dwelled on a certain shot, or not known where to take my next image.  In essence, I optimized how many quality photos I could take.  As this was one of the last images of the Liverpool waterfront I took that night, had I not planned this photo may never have happened.  Plan a shoot schedule, and check out spots before you shoot.