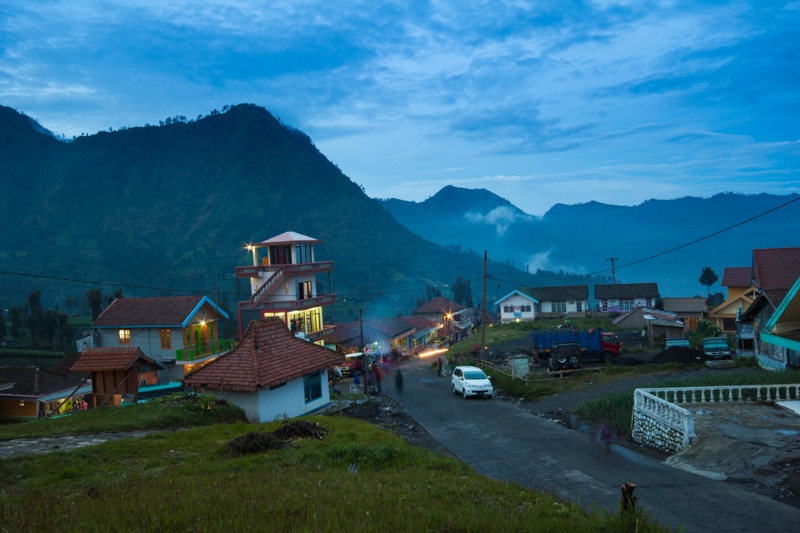 Mount Bromo the Overrated and Overrun

For the most part, I kept my mouth shut about South Bali.  I posted photos instead of writing negative articles because I worried it was not Bali, but me.  Part of me also worried that the grumpiness I was feeling on the island was tied to the area I was staying: Kuta.  Crawling over to Lovina, which I really enjoyed, I realized that the issues of South Bali weren’t necessarily imagined.  Moreover, they are carried right over to other tourism destinations in the country, in particular: Bromo Tengger Semeru National Park. 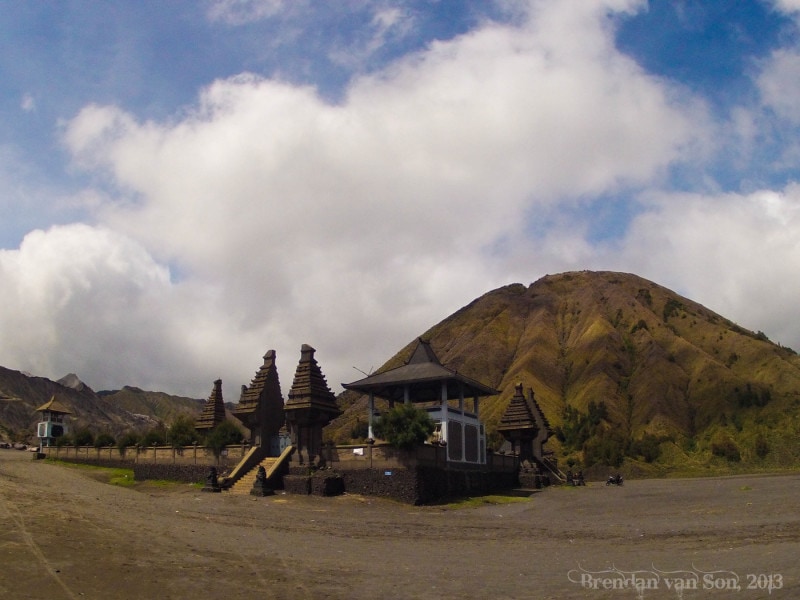 I’d been dying to go to Mount Bromo since the first time I saw the moon-like landscape soaked in cotton clouds.  It seemed so distant from reality, and so isolated; so beautiful.  But my experience with the park, and the surrounding areas was less than ideal.  In fact, I really can’t say much positive at all.  And those who know me, understand how much that annoys me.  I travel the world to see the spectacular and to inspire others to explore.  I hate coming down on places.  I hate ranting.  But sometimes, I suppose, you just need to let it all out.

Forgive me if the following rant is overboard and tired, but it really is a culmination of a variety of things here in Indonesia.

After a very pleasant train ride through some absolutely spectacular scenery, we arrived in Probolinggo in hopes of catching a shuttle or taxi up to Mount Bromo.  We were met at the train station by men who fiercely tried to sell us anything they could.  Of course, I’m not a rookie and that doesn’t bother me.  Then was a guy with a cell-phone claiming the man on the other end can get me a taxi.  When quoted 5 times the actual price, I passed him back his phone tell him that we are not stupid, nor are we made of money.

After searching for 2 blocks, we came to the conclusion that there are no taxis, jumped in a couple bicycle taxis and were driven some 7 kilometers away.  We’d asked for the bus station, but for some reason we’re dumped at a tour office, then they demanded 5x the price we had agreed upon.  The tour office couldn’t get us a taxi, and under threat of an impending storm, we set out on foot across the city towards the bus station.  Luckily, before long, a taxi finally pulled up and I was able to negotiate a fair price.

Now, I understand what’s going on in Probolinggo.  I’m sure people there see tourists shuttle themselves and their money straight through town without ever hardly slowing down.  This causes people trying to do anything they can to make some money before they inevitably slip up the mountain.  But this practice sets the tone for the experience.  And the way it is now, with no taxis, and constant scams, it only deters people from visiting.  And they’ll certainly not ever decide to spend a night or pass through again.  In fact, I would recommend anyone to skip Probolinggo all together if you can.

There’s no doubting that the Mount Bromo area is beautiful.  But it’s being completely ruined by a parks system that does absolutely nothing to protect the region and everything it can to strip money from tourists. 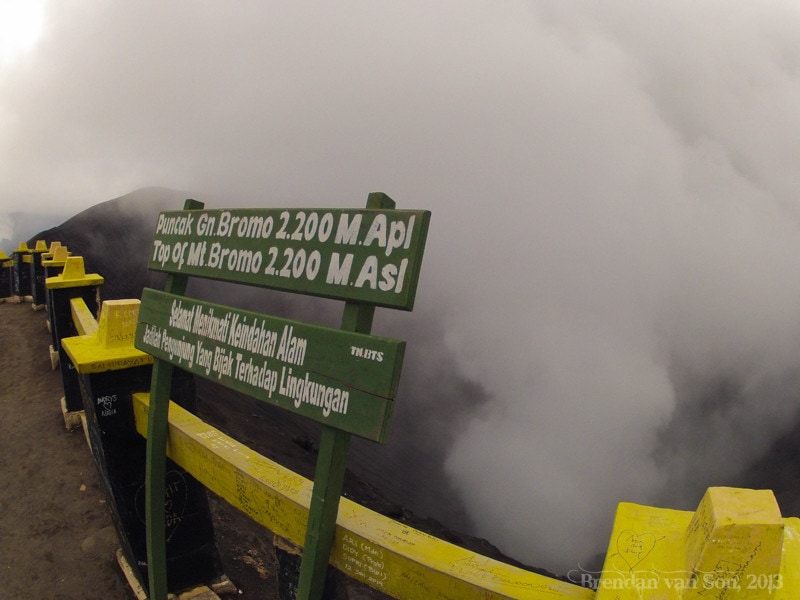 At the top of Mount Bromo. Took everything I could to get a shot that was garbage free.

When we entered Bromo Tengger Semeru National Park we paid the $7 entry fee and felt that was it fair.  But it didn’t take us long to wonder where that money was going.  A hike from the very cool Cave Lava Hostel in Cemoro Lawang took us across the sand sea and to the base of Mount Bromo.  Though there is meant to be one road, there is a web of roads and trails all over the land, and embedded in that sand is a constant scatter of rubbish.  Up Bromo, the sulpher-spitting beauty, the steps are soaked in water bottles, and plastic.  Inside the mouth of Mount Bromo, it’s starting to resemble a land fill, not a pristine volcano.

The puzzling part to me is that there is no one enforcing it, no one cleaning it up, and not even the inkling of park staff in general.  If fact, the only staff members to be found in the park are people selling postcards, and rides on horses.  As fantastic as the place is naturally, it’s a dump.

Of course then there’s the sunrise.  The rumbling of 4×4 jeeps are the 3am wake up call that every visitor to Cemoro Lawang receives whether they want it or not.  Jumping in the back of one of those jeeps, you are promised to be set witness to one of the most spectacular sunsets in the world.  And well that may be the case, actually seeing it is another story. 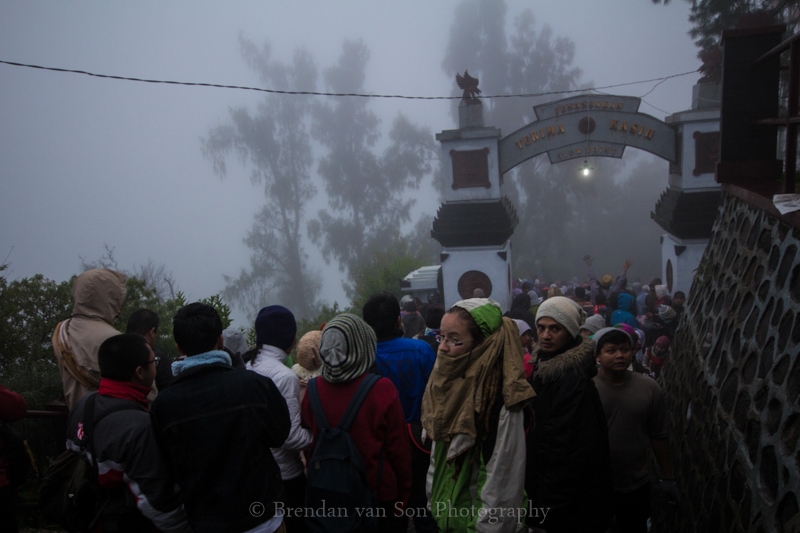 People pushing to get around the “viewpoint”

We arrived at the viewpoint a little bit late, but still in the dark.  At the top I would estimate there to be no less than 600 people, probably many more.  We counted over 100 jeeps on the way up, each with a 6 person capacity.  There must have been another 100 scooters and motorbikes.  With about 20 meters worth of viewpoint, the area is a claustrophobic mess.  We didn’t get our sunrise the morning we went up.  And perhaps that may have helped sour the mood.  However, when I imagine a sunrise I don’t think of 600 people loudly polluting my ears, and the natural scene around it. I don’t imagine being held victim by the sound of muffler-less scooters rumbling and postcard salespeople shouting. 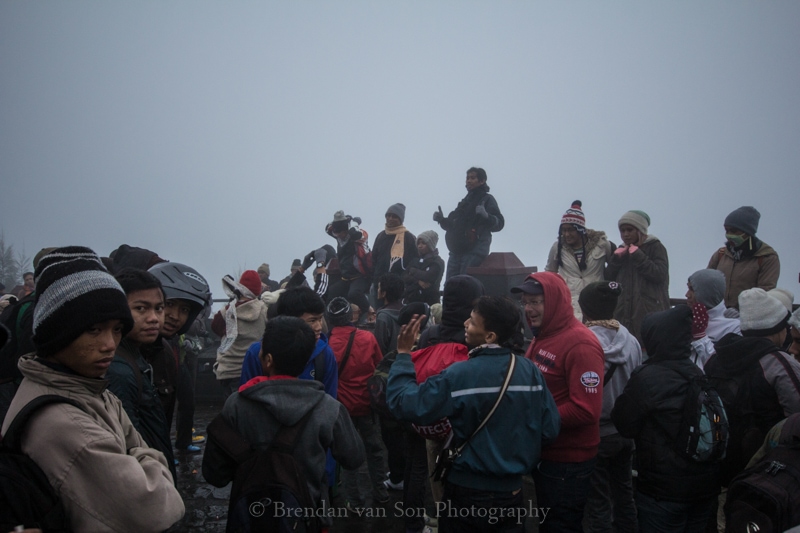 Crowds at the viewpoint “enjoying” sunrise.

Of course, when there are crowds, you are part of the problem.  And nowhere have I ever been have I ever noticed such a problem.

With rain pounding down on us, we were dropped off by our jeep at the base of Bromo once again.  Having climbed it already, and with about 4 feet of visibility, we asked our driver to simply return us home.  After reminding us that we have an hour booked into the tour for the mountain, we said we didn’t mind, and that we wanted to go right back.  He refused.  His excuse was that the 2-3km drive would cost him too much fuel, and wasn’t in his schedule.  He got on the phone and his boss demanded more money from us.  Thus, in the middle of the sand sea, in the pouring rain, we hiked back up the hill to Cemoro Lawang. 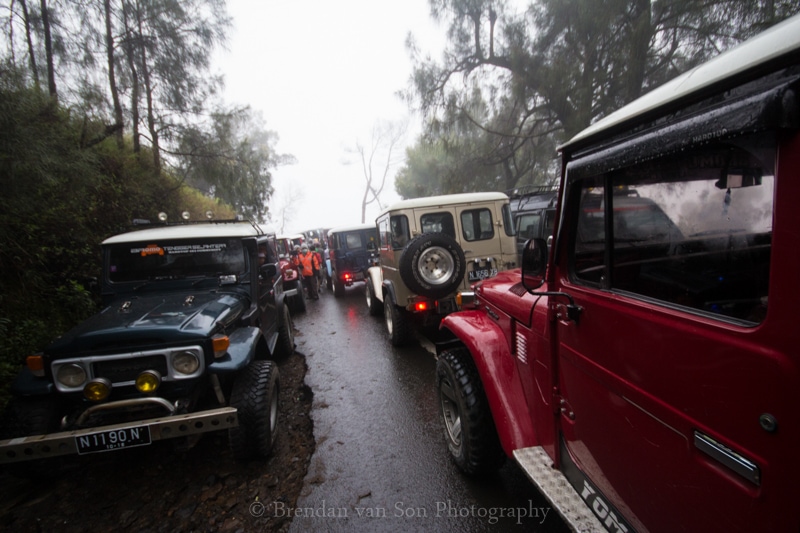 Jeeps honking and pushing their way around the “viewpoint”

To hire a jeep yourself for the sunrise tour, the price is 350,000Rp.  We booked individually and paid 125,000Rp each.  Thus, with 6 people in the jeep we paid double the usual price.  But of course, that profit isn’t enough to cover 15 cents worth of fuel.

The bright spot of this all was the Cafe Java Hostel and the vibe up in Cemoro Lawang beyond the tourism. It feels like a Himalayan village, and has all the potential in the world to be amazing.  The hostel was a nice refuge away from the noise of the cities down on the coast, aside from the 3am wake up call.  I really did enjoy my time up there, just not the sites.  Just not the tourist side of things. Definitely not the trash and crowds.

The town of Cemoro Lawang

Something has to Give in Indonesia

Something has to give in Indonesia, or it will start to gain a reputation strong enough to fully deter tourists.  In Bali, during the rains we witnessed locals dumping trash into the water flowing down the streets.  Trash that would later run up on the beaches where tourists and locals alike are meant to enjoy.  Polluting a sea where much of their livelihood comes from.  Indonesia has a trash problem.  I’m not sure whether it’s educational, or a lack of infrastructure, or the burden of high density, but something has to give, and it needs to give soon.

I’ll tell you this right now, as much as I’ve loved nearly every local in Indonesia I’ve met, I can’t see myself coming back.  There have been too many times people have treated me like a dollar bill, and too many times that I have felt taken advantage of.  Beyond all that there is the garbage, and every minute I stay in this country I can’t help but feel like I’m contributing to the problem.  Each item I use, I can see floating out there in the sea with the rest of this country’s rubbish.

Of the 70-something countries I’ve travel to, Indonesia has as much potential for tourism as any, if not more.  From temples, to jungles, to beaches, and history, there really is anything a tourist would want.  But, there is plenty of work to do to get it there. And judging by our experience in Bromo, and other locations, that’s a bit of an understatement.