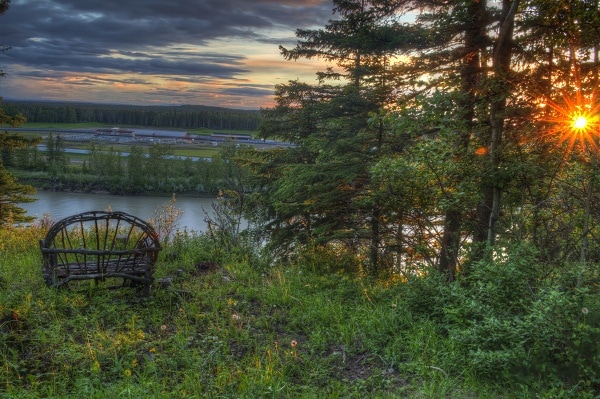 The view from our backyard
Travel Photography Blog

I roll out of the bed I spent my teens sleeping in and stumble into the basement of the house where I was born.  It has changed since my early days.  It used to be unfinished, a mere cement cave, the envy of all my friends.  We’d spend hours down here playing hockey without ever worrying about breaking anything.  We didn’t need nor want fancy appliances back then, our luxury was anywhere we could play hockey.

I twist the lock on the door and step outside.  I make sure the key is still hidden in the same spot is always has been.  It is, and it’s not a secret.  I think that everyone in town knows where the key to our house is hidden.  It doesn’t matter, the door could be unlocked and nothing would happen.  The outside of the house hasn’t changed much, aside from a terrible new coat of paint that I’m sure my parents must regret.  I check the front lawn to see if the spot on the grass my brother and I wore out playing baseball on has grown back in; it hasn’t.  The trampoline beside the house is still being used by the neighbour kids, although they are new ones now.

I back out carefully of our twisting driveway.  I’ve done it so many times, that even now after all these years I’m sure I could do it blindfolded.  I steer the car across town trying to sort out what is new and what has remained the same.  I softly steer the car through a new light in town and down main street; it hasn’t changed at all.  It is still wide enough to drive a tank battalion down, and pedestrians still always have the right away.  No matter how much we obey the law in Rocky, mainstreet is the one place that jaywalking is not only the exception, but the way things work.

As I continue, I spot my elementary school.  It hasn’t changed at all.  I can’t help but laugh when thinking about the days we used to spend in the fields throwing snowballs, playing football, or being chased by girls.  We played a sport religiously that we called “kick puck,” though in reality it was just soccer using a rubber puck.

I head into the place we have called “the new subdivision” for the past 25 years.  I roll my car past the place I kissed my high school sweetheart for the first time.  I can sense the moment as if it was yesterday.  But it also seems so far away; as if it never really happened, but was just a dream I had or a scene I had seen in a movie.  10 years later and countless other relationships and I’m still amazed by the fact that my first, and most naïve, was probably the most real I’ve had.

I stop my car at a park nearby and wander out into the small basketball court that forms the centerpiece.  I look up at the rims that are coated with a fading shade of red, they seem higher than they did when I was young.  I used to spend hours here, it was my escape.  When I had a basketball in my hands the world seemed clearer; simpler. I’ll never forget the time I left home, upset about something, and came to these courts.  I played for hours in the pouring summer rain, and eventually the sound of the basketball drumming through the neighbourhood at 3 in the morning caused the police to come and take me home.  I’ll never remember what I was upset about, but I’ll never forget how when I arrived home that night any “issue” I had was over and done with.

As I step back into the car, my nostalgic journey seems to be guiding me now.  I cross the “New Bridge” and drive some country roads.  We used to have not-so-secret bush parties here at places we called “the tresel”, “the beach” and a variety of other non-descript holes in the forest.  I’m sure the kids still come out here.  Driving through town I see some of the high school kids, they look and act almost identically to how we did back in the day.  Something never change.

My car steers me back home, and I’m taken aback by the journey my life has taken me since I left this town for the first time at 18.  I was lost in life.  I knew I wanted something bigger, but didn’t have a clue what it was or how to get it.  Today, 10 years later things are a little bit more clear.  My mind is no longer muddled with pipe dreams, because I have learned over the years that there is no such thing.

Despite the fact that I don’t feel like I belong in this place any more – I am essentially a stranger in my own hometown – I can’t help but look around at its streets, parks, and people and realize that this is what shaped me.  It’s an emotional experience coming home after so many years away, perhaps as powerful as any far off world I’ve explored.  And at the end of the day, regardless of how far we travel in this world, we can never have another hometown.