***Normally I would reserve this type of stuff for friends and family.  But then I thought “why not throw it out there, you all are my family.” What a wild year.  I was just thinking back to the last Christmas letter I wrote a year ago, and I can’t believe how much has gone on since then.  It seems like much more than one year’s worth of living took place since last Christmas.  Last year, when I wrote my letter from the Nazca desert in Peru I wrote it the Scrooge format of past, present and future, and I think that I’ll cover things the exact same way this year. Up until the end of July I continued my work for Kumuka Worldwide.  The job was very demanding, but rewarding at the same time.  Any job that allows someone to do what they love doing while getting paid can be registered as positive.  However, the constricted live of always having to be somewhere specific and lack of personal life really began to wear on me so I left the company when my contract expired.

I decided to take a stab at the world of travel writing starting back in March of last year on the advice of some family members who had read some of my more descriptive articles on my personal travel blog.  I began submitting articles and to my surprise nearly everything I submitted was published somewhere.  As a base for my writing I created a personal website with stories and photography from my travels https://www.brendansadventures.com has been a very successful venture and it has led to many different opportunities that would have never been opened without it.  I put a lot of hours in to the website each week and I have found the reception I have received very rewarding.

My travels have not all been work related and after my work with Kumuka ended my travels have been almost entirely funded from my travel related writing (with the exception of a loan given by my parents: I swear I will pay you guys back).  What does someone who works in travel do for vacation?  Well we travel.  A couple of my bigger ventures included San Andres Island and Colombia last January; and in June, I traveled to Chicago to visit Paola who had been living there for a couple of months.  Over the past couple of months I have traveled through the Patagonia region of Chile and Argentina.

We also made a trip to Canada in September and October to make sure that everyone was surviving without me.  To my surprise, and content, everyone is very well.  Grandpa and Grandma are carrying on in Canmore and are still as healthy as the fittest of Oxen.  We actually spent a month staying with them, while I worked for my old company and Paola took English classes.  Spending the time with Grandpa and Grandma was priceless, and I feel much closer to them now because of it.  Mom and Dad are keeping very busy in Rocky while dad keeps lying about how he’ll retire soon.   Curtis is living in the basement at the house either working very hard on his accounting career or setting up some secret plan on business world domination, which I’m not sure.  It was great to be back at home for a little while.  Mom and Dad have been hard at work renovating the house over the past year and it looks great except in the bathroom the glass doesn’t go all the way up to the roof and the deck umbrella awkwardly matches the inside living room drapes (sorry mom, I had to).  Jennifer is still living in Toronto while patiently waiting for a potential Caribbean wedding with Rob.  We spent Thanksgiving (the Canadian, and right, one) this year down in Taber at Oma’s house (she is doing very well also).  Nearly the entire van Son family made it up, and it was great to see everyone and catch up.  I returned to Peru in October without firm life plans, however of late things have really started to come together (more on that later).

In mid-November Paola and I ended our 13month relationship.  I won’t go into details on the matter, but as any of you who were lucky enough to meet her already know, she is an amazing person and I have no doubt to her future successes in life.  I wish her all the best in the future. I left Peru and have now made my way south through Chile and Argentina.  It’s amazing how things can change so quickly in life.  Just a year ago I planned on spending 12 months in South America before heading into the office world, or grad school, somewhere in the field of international politics.  And today, I am sitting in the world’s southern most city, Ushuaia, Argentina, as a published travel writer and basically a nomad.

I have been offered a media trip (yea for media credentials) to visit Antarctica which leaves on the 2nd of January, something I am very excited for.  Once I’ve set foot on Antarctic soil I will have set foot on each continent of the world save for Australia (or Oceania, South Pacific, whatever you might call it).  I promise a load of penguin pictures. You can see my Antarctica Itinerary here: www.peregrineadventures.com/antarctica/antarctica/antarctic-explorer-10-nights-2009/?cid=pbvs

Out of curiosity I decided to plug in some numbers since last Christmas in regards to how many kilometres I’ve traveled since last Christmas day.  As the crow flies, I have traveled over 80,000km this year alone, which is almost exactly two times around the world.  However, I’m sure that if you were to count the twists and turns in the roads along the way that number would be closer to 90,000 – 100,000 km.  Travel, I have found, has become a very part of the fabric of who I am.

As I mentioned, I am heading to Antarctica on the 2nd of January.  And from there I will be beginning my journey northbound through South America, the Caribbean, possibly Central America and Mexico and hopefully back in Canada around June or July of 2011.  I have a couple of media gigs set up along the way which is always fun, but some of the highlights I have planned over the next 6 months or so are:  Iguazu Falls, the Chaco of Paraguay, the Pantanal of Brazil, Carnival in Salvador, The world’s highest single drop waterfall (Kaiteur Falls, Guyana), the world’s highest waterfall (Salto Angel, Venezuela), Tayrona National Park (Colombia), and Cuba.

Looking a little bit further into the future leads to some exciting possibilities.  I have joined forces with a very good 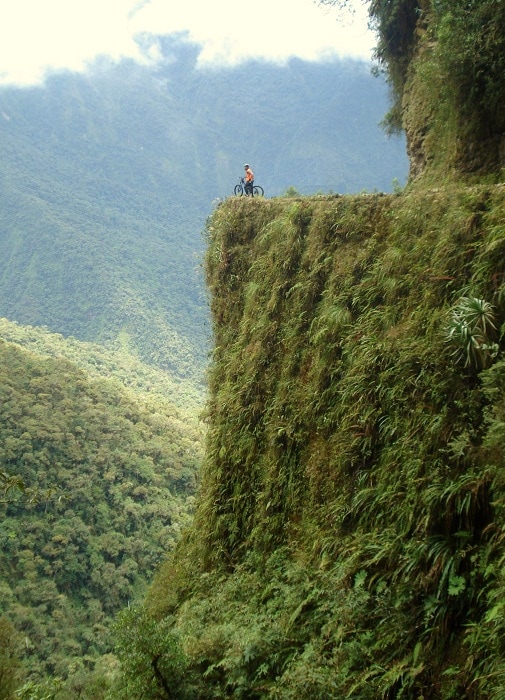 Solo on top of the death road in Bolivia

Australian friend of mine and we are in the process of working out some travel related business ventures.  We have gone back and forth on a number of different ideas and have yet to settle on anything specific yet.  However, we are hoping that within the next 6 months or so we will be able to have a concrete plan of attack set out.  I am very excited about this venture, and I have a strong feeling that this is going to be the start of something amazing, I couldn’t be happier about it (Pinky do you know what day it is today??? It’s the day we take over the world!!!!!).

Christmas is always the time of year that I yearn for home.  Spending the holidays with all of you would be the icing on the cake of what has been a very good year.  I miss you all, and I hope that some of you take the time to email me updates of yourselves as well.  And if you’re on skype find me and maybe we can have a Christmas day chat!

Take care and go easy on the turkey,