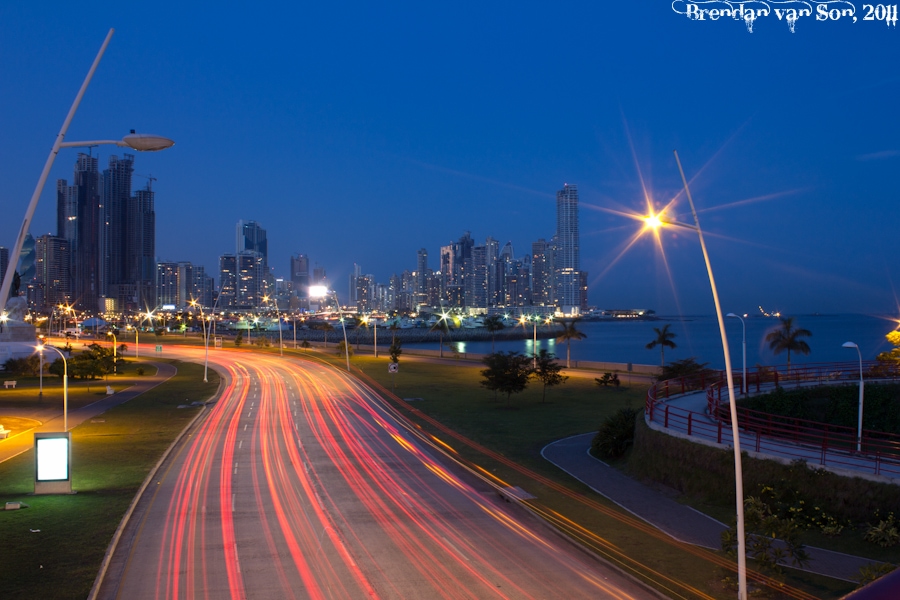 I’m not sure there is a place in Central America that changed as much as Panama City has over the past decade.  In the 7 years between my visits to the Panama, the city has morphed and grown incredibly.  To be honest, I hardly recognized the city when I arrived.  There was a new highway leading into the city, the coastline had been morphed, and there seemed to be about 10 times more skyscrapers than before.  Change, however, isn’t a bad thing.  I noticed right away that Panama City is cleaner than before, it is safer than before, and the coastline is much more appealing than it used to be.  To top it all off, the main highway leading into the city is covered in pedestrian bridges that offered amazing vantage points to get shots of the city’s skyline.  I came away with about 3 or 4 panoramas and skyline photos of Panama City that I’m really pleased with.  I’ll show some more off in the future.

Shooting cities means a little bit of prep work usually.  In the case of this shot, I had actually hiked around the shoreline the day before looking for nice vantage points.  I then created a scheduled photo shot list based on the time of day and the type of photo that I wanted.  For example, I wanted to shoot Panama City’s old town’s skyline with soft light with the sun still barely in the sky.  I wanted a pure skyline shot of the city with the light just after the sun had gone down.  And I wanted a early night shot from the bridges with that perfect blue iridescent light from just before night reaches pitch black.  I took my map and created a route to walk that would allow me to get as many shots as possible in the light that I wanted.  Planning is nearly just as important as the shooting itself when it comes to urban photography.

Technically there is no major trick to this photo.  I shot the photo on a good travel tripod with my Canon 60d and 18-55mm lens.  The one thing that is crucial to getting this shot, though, is to take of the UV filter off your lens.  If you have a filter on for night shots of cities the light bounces around and turns into a blob of light rather than the star you see in this photo.  Also, to get that star effect you want your aperture to be quite narrow.