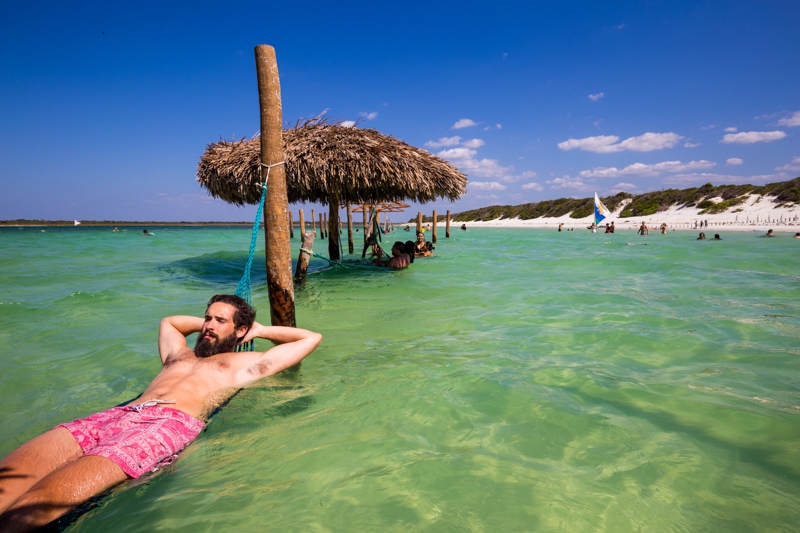 Paradise and a Brief Vacation in Jericoacoara

If you tuned into my last video, you’ll know that I’ve been a  lot burned out of late. I’ve been going extremely hard on this travel stuff for the past 6 years, and it’s wearing me down. I decided to travel harder, and then take a month off from travel here and there to catch up on work and rest. Instead, I’ve just travelled harder, and worked in the short spaces of time in between. Thus, by the time I arrived in Jericoacoara – one of Brazil’s hottest tourist destinations – I was ready for a couple days of rest.

And, to be quite honest, Jericoacoara was exactly what I needed. It recharged my batteries enough to get me through the rest of Brazil without collapsing of exhaustion. But more than anything, it reminded me that travel is supposed to be fun.

I told myself upon arrival to Jericoacoara that I was going to act a bit more like a tourist than I usually do. The biggest negative to making the move from travel writer to travel photographer, has been that I’ve spent most of my time shooting and location scouting.  I have kind of neglected doing the typical tourist things like laying on a beach, going on excursions, or having a bit of a party without worrying about being hangover-free the next day. My travels have become a bit focused on getting shots.  Sometimes, I won’t even go somewhere if I don’t think I’ll get some use-able images from that location.

The first day I was in Jericoacoara, I didn’t leave my hammock the entire day. I just relaxed, caught up on afternoon naps, and even did a bit of reading. The second day, I headed out with a group from the hostel to do a buggy trip to some lagoons. And, of course, each of those nights I sampled the local nightlife. 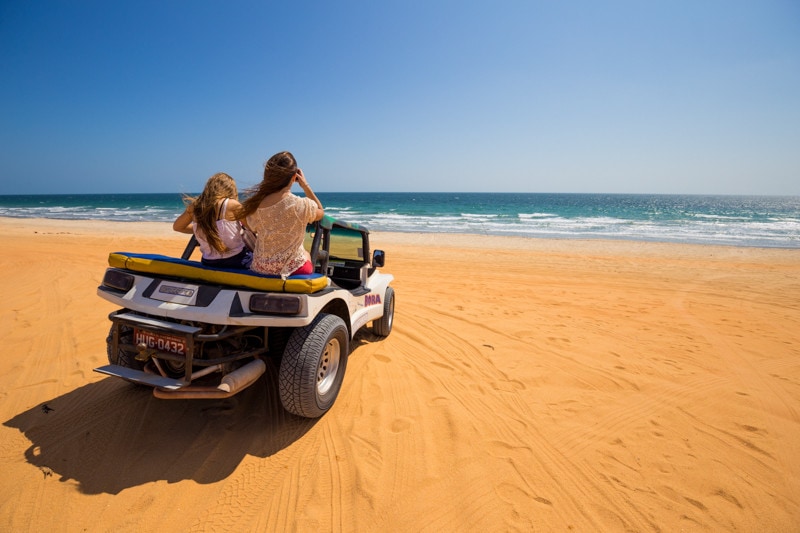 Dune buddies on the dune buggy. 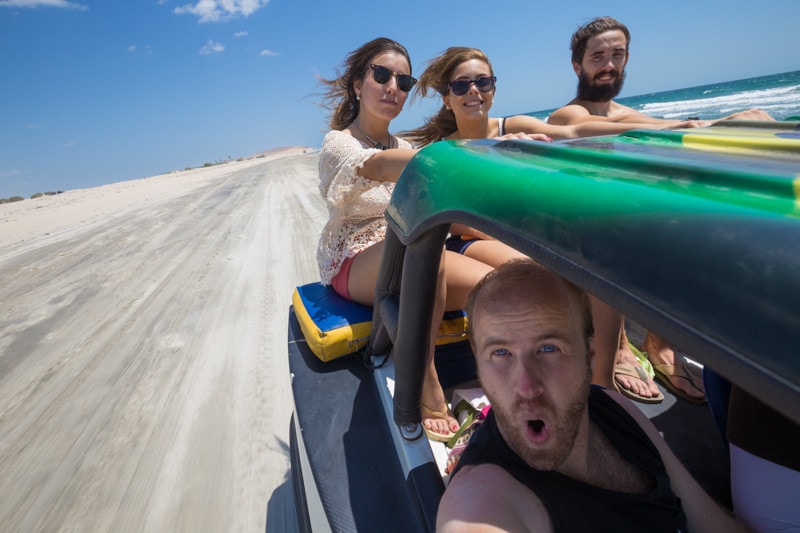 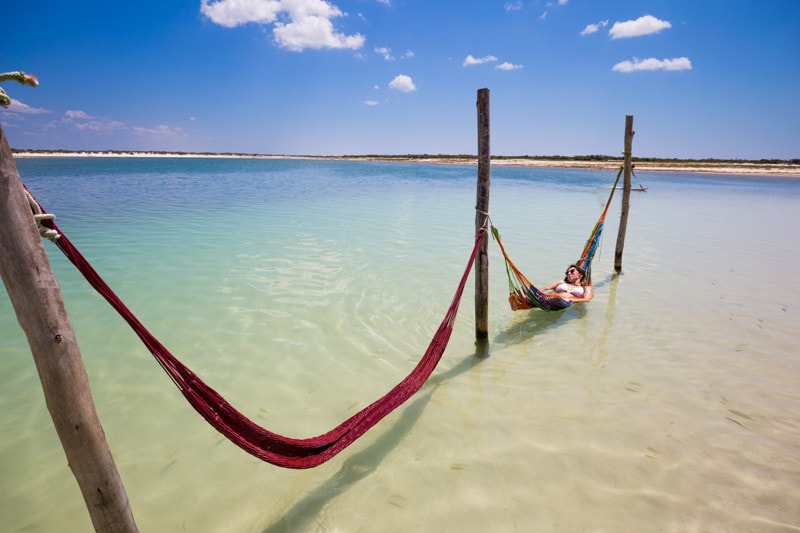 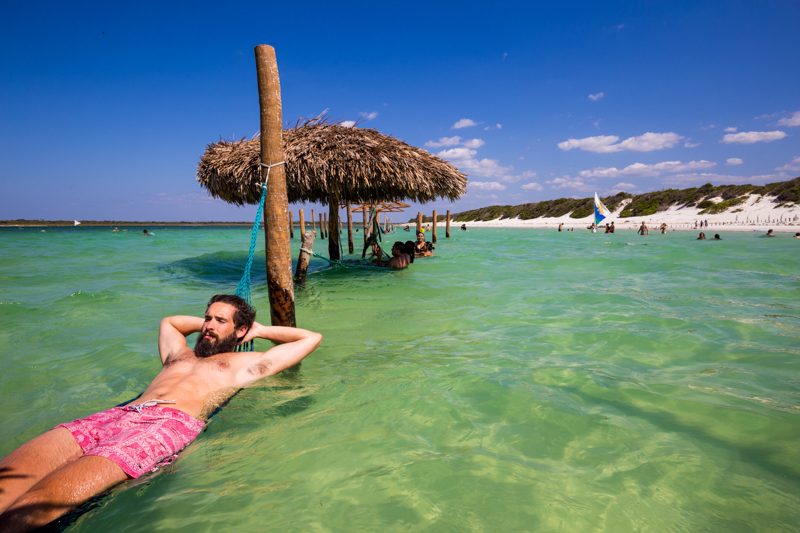 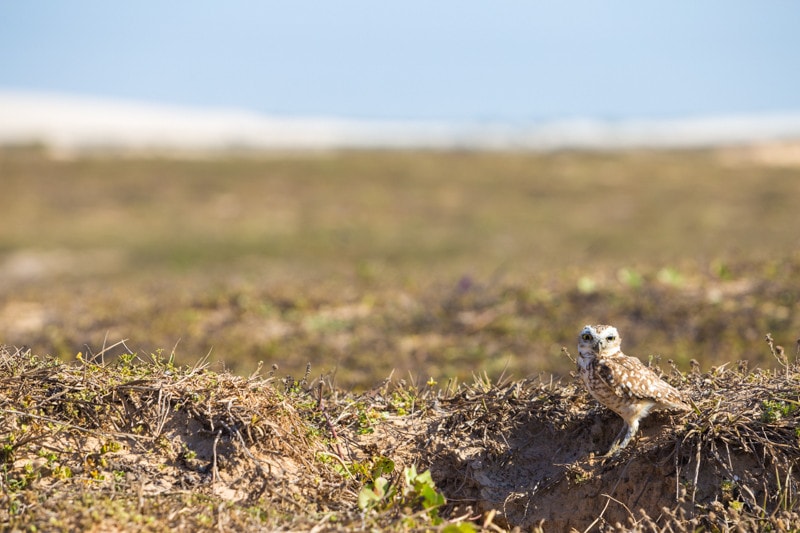 Stars and Sunrise at Pedra Furada

After a couple days recharging my batteries, I decided it was time to get a couple images out of Jericoacoara. I actually had a couple image requests from Jeri.  So I got up at 4am and hiked out to a place called Pedra Furada – which is one of the iconic spots around town. The walk, in the dark, wasn’t without adventure. I was completely blind wandering through the dunes, and lost the trail about 15 times, I was attacked by a wild pack of dogs, and I also nearly stepped on a poisonous snake. Oh, and I also slipped and smashed my camera on rock lens-first. Luckily, I had an ND filter on the 16-35mm lens, or else I would have definitely broke my $1000 lens. The ND filter shattered instead. I’ll gladly take the $50 hit on that instead of the lens.

Once I got to Pedra Furada, I used a low hanging moon as a natural bit of light and shot some star photography of the rock and seas behind it. The images came out pretty cool. However, I need to remind myself to check the histogram when shooting at night. So often, the LCD makes the image look bright enough because it’s so dark outside. Then, I’ll get the image on my computer and it’s too dark.

After the sun came up, I found a couple cool locations to photograph both Pedra Furada and some of the seascapes in the area. The images came out pretty cool. However, I was reminded how short the golden hour light lasts up this close to the Equator. You really only have time for 5-10 photos when the light comes up this fast. 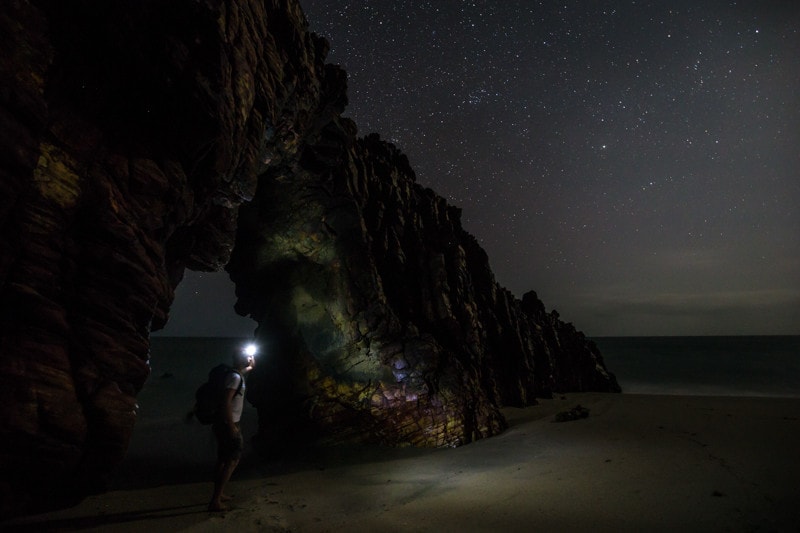 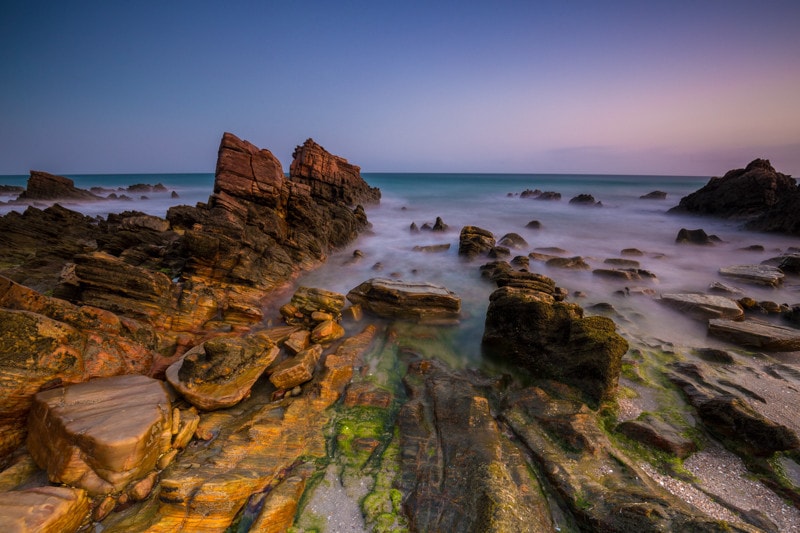 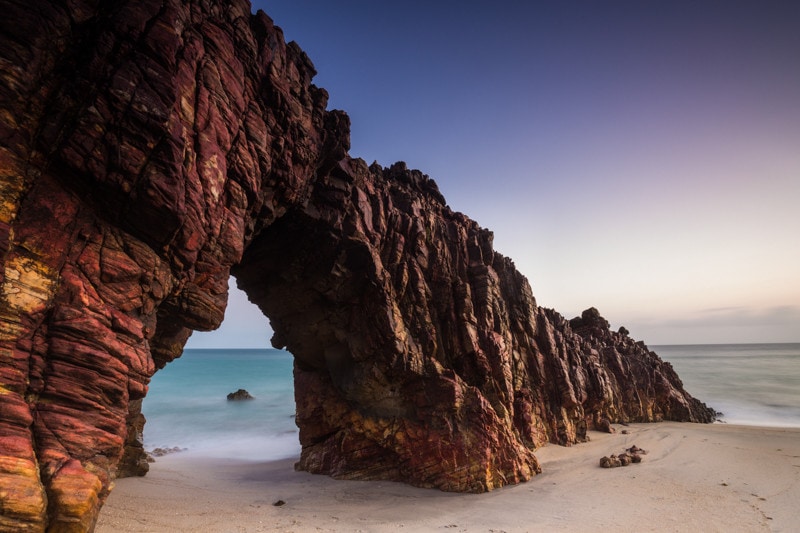 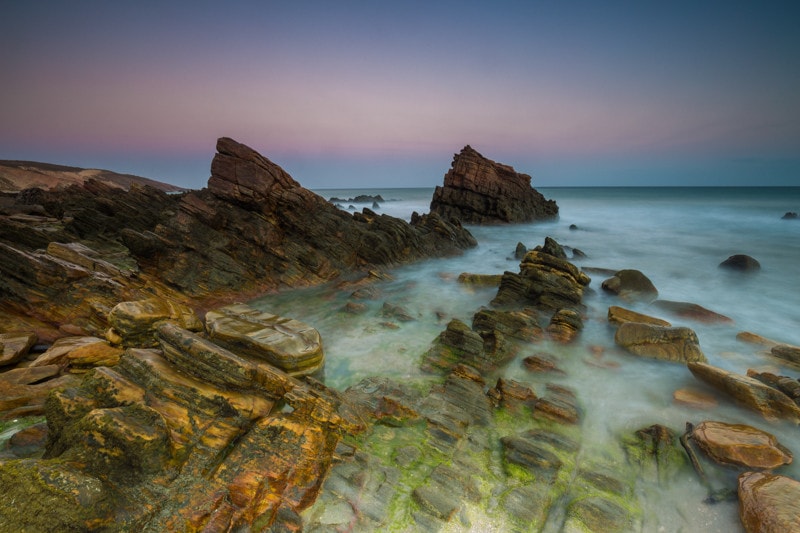 Such a beautiful coast.

In Jericoacoara, I met a dude named Matt Bouvet. He’d be my partner in crime for these couple days in Jeri as well as on the boat to Manaus coming up. It was great to have someone to hang out with not only to have someone to cause trouble with, but to have a model. I convinced Matt to head out to some of the seascapes there in the area to shoot some long exposure images on the sea.

It was a fun location to shoot. And, it was nice to not have to hit the 10 second timer, run into a spot in the scene and pose myself, for a change. 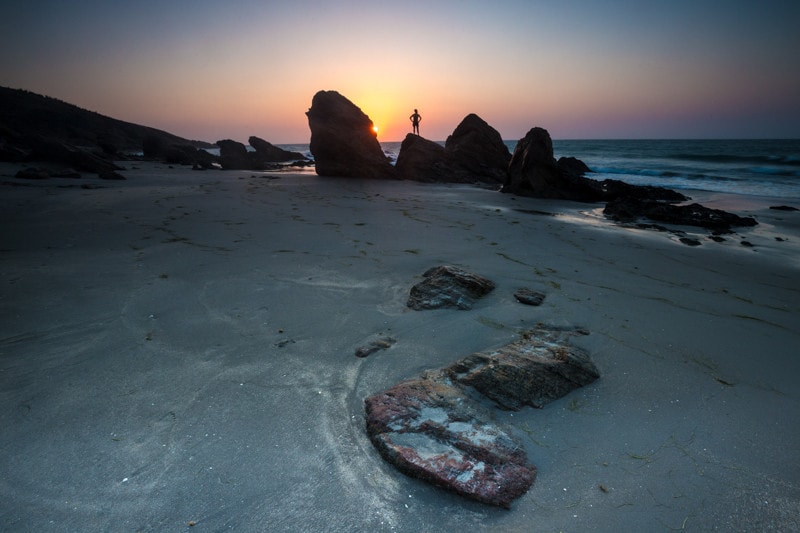 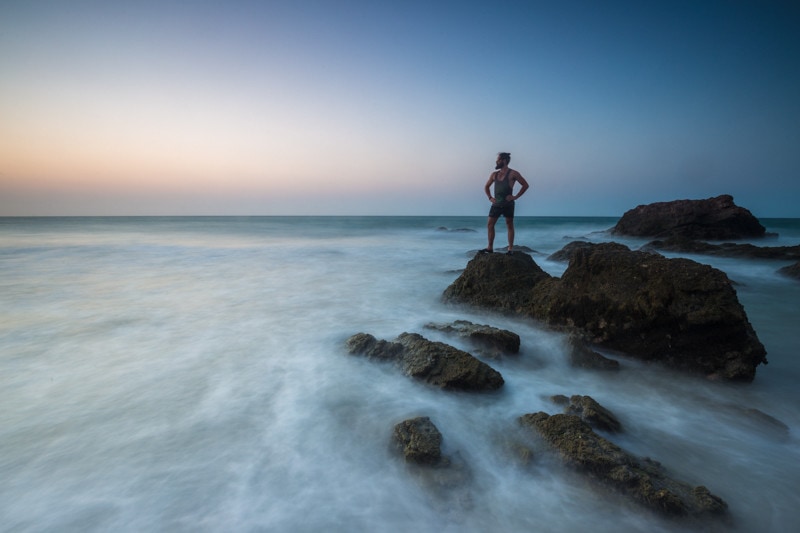 Thanks to Matt Bouvet for modelling these images. 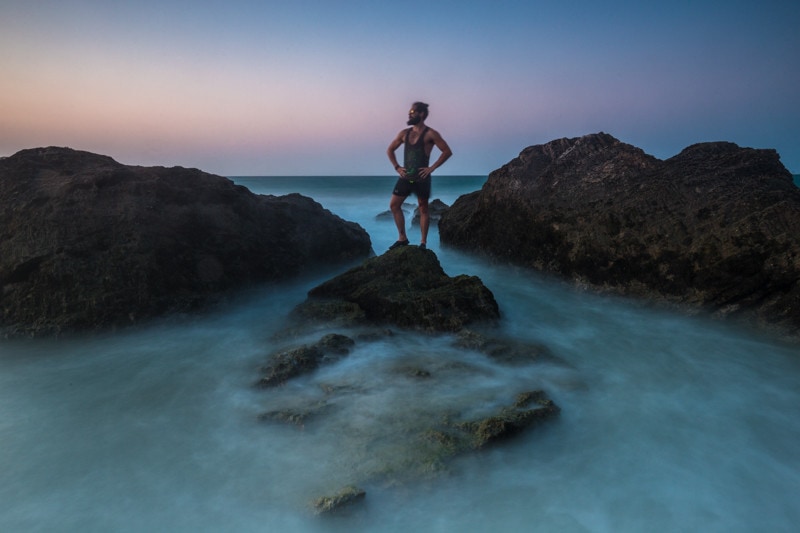 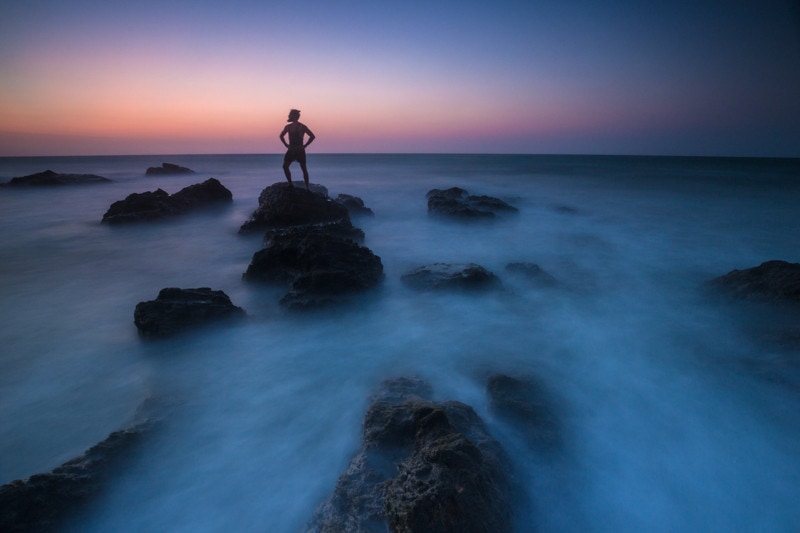 After Jericoacoara I headed to the Amazon town of Santarem where I’ll be catching the boat up the river to Manaus. That will be my last video and article from Brazil before I head back to the north of the continent to both the Galapagos Islands and Tayrona National Park, Colombia.