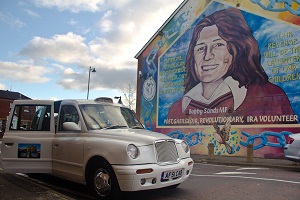 Peeling Below the Surface of Belfast in a Black Cab

As a younger version of myself I remember hearing the stories of Northern Ireland and of Belfast. Those names were synonymous with violence, bombings, rioting and, quite frankly, hatred. But as I wandered the streets of Belfast for 3 days I couldn’t help but wonder where the signs, or perhaps the scars, of those days could be found. The streets flared with nothing but calm and the monotonous shade of brick told to me not a single secret.  I wondered if the conflict in Northern Ireland still existed. However, within a minute riding in the back of a Black Cab with George in the city, all I wondered was explained. It was right in front of my eyes the entire time.

The stories of Belfast need not be peeled back from a superficial layer, they lay on every street corner, they are painted on the walls, and they read out as clear as a thousands words.

The moment I stepped into the comfortable cab George warned me: this won’t be a tour full of rosy fairy tales, too many people died to glaze over things. And as someone who studied conflicts in University, and has seen it on the ground level in Colombia, Sierra Leone, and a number of other places, I wouldn’t want it any other way. At the end of the day, wiping our ugly past under the rug might make it quick to forget but we will never learn from it and soon the mess under the rug will begin to rot and cause another stench, and no one will even know how it got there in the first place.

We dive through town as George explains that the violence and seperation is not as religious as it may seem. It is republican against loyalist. But let’s be honest, it is citizen vs. citizen. No conflict between two people would ever exist if there were no economic tension between two people, and their certainly are; they are fairly evident.

“Right now we’re in neutral territory” George says as he drives along what appears to me as a normal street in the city, “We’re crossing now into Loyalist territory.”

I wonder what has defined this sudden change of grounds before he points to a mural on a wall, one I took a photo of earlier not knowing of it’s meaning.

“That’s a Loyalist mural,” he says as if it should have been obvious to me.

I look closely at the markings and notice King George’s Cross and a red hand.

“That red hand is the one thing we agree on, us and the loyalists” he says finally divulging the side of the lines his feet stand on.

I can’t help to start to wonder if I’ve jump on the back of a propaganda ship. It would be easy to see how sides could easily use the influx of tourism to begin to push their ideologies on the greater global community. From the backseat of this cab, I wondered, was I about to be fed the propaganda of a loyal member of the IRA?  I wasn’t.

George stops the car in what he claims to be the heart of Loyalist territory: The Shankill. We are met by another cab driver who shakes my hand and introduces himself as Joel.

“Joel is a loyalist,” George says while obviously holding back some emotion behind his eyes. “He is going to show you around The Shankill. It wouldn’t be fair of me to tell you about Loyalist history, it’s better to hear it directly from the mouth of one.”

Joel speaks of the men who fought for his side from the early days on, and is careful to be politically correct as he narrates.

“Among the loyalists, he is a hero,” he tells me as he points towards the mural of a man whose face is covered by a balaclava. “They say that he alone is responsible for the killing of over a dozen people.”

We continue our walk through the shankill as he points to a mural of a man pointing his gun at me.

“This is Belfast’s version of the Mona Lisa,” he says as he points to the gunman and explains how no matter what direction you look at it the gun always appears to be pointing at you. It does. “It was so people coming into the neighbourhood knew that they always had eyes on them.”

After looping back to the black cab, which is ironically painted bright white, I watch interested as the two guides exchange joking pokes at one and another and can’t help but be struck by the fact that just a couple years ago these men would have been sworn enemies. There is still tension, that is clear.

As we leave “The Shankill” George points up streets and at buildings telling me to remember what they look like. Eventually we pull over in front of the mural of one of the Republican heroes, and the wide-set driver tells me to stay in the back. George, who is somewhat imposing, in both stature and manner, hops in the backseat with me carrying with him a stack of documents: newspapers, photos, and other memorabilia taken from the years of the troubles.

“This,” he says as he points down at a photo of a burning street “is the street we just drove.”

I look back at the calm avenue where a woman now pushes a stroller and can’t help but try to imagine what it would have been like. George’s words begin to flow together as the reality of the city I am now in the middle of strikes me.

“How could a place so calm have been filled with such pain, such cruelty, such devastation. How could a man kill his brother?”

The truth is that even years later the war still exists, although on a new political front. The city of Belfast is still divided. It is Britain and Ireland, Catholic and Protestant, and it is Republican and Loyalist.

Only time will tell if this war has really ended or has just reached a reprieve as sides take breathes. However, one thing is for certain: this history cannot be swept under the rug and recounted in fairy tales. History allows us the opportunity to learn from our mistakes and not continue to make them. Belfast’s beauty lies within its resilient people, people like George and Joel. People who, to a foreign eye like mine, don’t appear any different. To my eyes they are countrymen, they are brothers, and above all they are human beings.

War is a terrible tumour which often manifests itself in the heart of a people, and the only thing that can cure that evil growth is love. I hope that in the case of Belfast, a flower can grow through the walls that have been built up, and love can find its way to shine through.