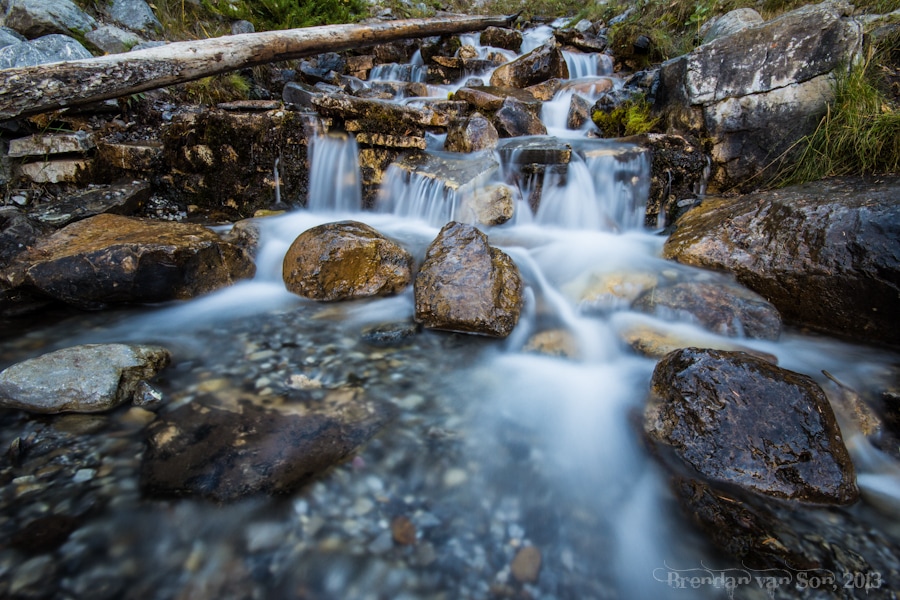 Photo of the Week: Kananaskis Waterfall

I honestly have no idea what this waterfall is called.  On the highway that leads into Kananaskis Country from the Trans-Canada Highway, this waterfall is right along the road.  In fact, it’s almost a little bit of a strange slice of nature.  Not only is it right alongside the road, but there’s also a little barrier and a park bench set up in front of it.  No trail, nothing. Just a bench staring off at the waterfall.

My trip around Alberta has been two-fold.  On one hand, it’s been about strolling through my past.  It’s offered me a retrospective look into my former life and how far I’ve come.  On the other hand, it’s also allowed me to make up for skipping through the part of the world that I call home for so long.  I had been to Bow Lake hundreds of times before and never photographed it, I’d been through Canmore hundreds as well I’d never fired a shutter there either, and this waterfall I’d seen people sitting at that bench painting it before, and like almost everywhere in the province, I hadn’t photographed it before now.

I am loving this stroll through Alberta, I feel like it’s letting me make up for all the neglect I may have previously laid to my home province.

The best piece of advice you can ever get as a photographer is to look at a scene and ask yourself “where would no one before ever shot a photo of the scene from before”.  Since I’m sure this Kananaskis waterfall had been shot a million times before, I looked around and decided that to get a unique image of the site I’d have to get right into the creek.  It was cold.  My feet nearly froze to solid ice. But, I got the shot.

The second best piece of advice you can ever get as a photographer is to see a scene not as your eyes see it, but as you imagine your camera will see it.  Search for the range of light your camera can capture, not what your eyes see.  Moreover, see how the image will look via long exposures and narrow apertures rather than how you see it with your eyes.  This image was easy to imagine, I wanted a framed waterfall with silky waters.  I also wanted the rocks to show below to show how clear the water was.  To get that, I shot this from right in the creek with a 10-20mm lens and a 3-stop ND filter. I think it worked out well.