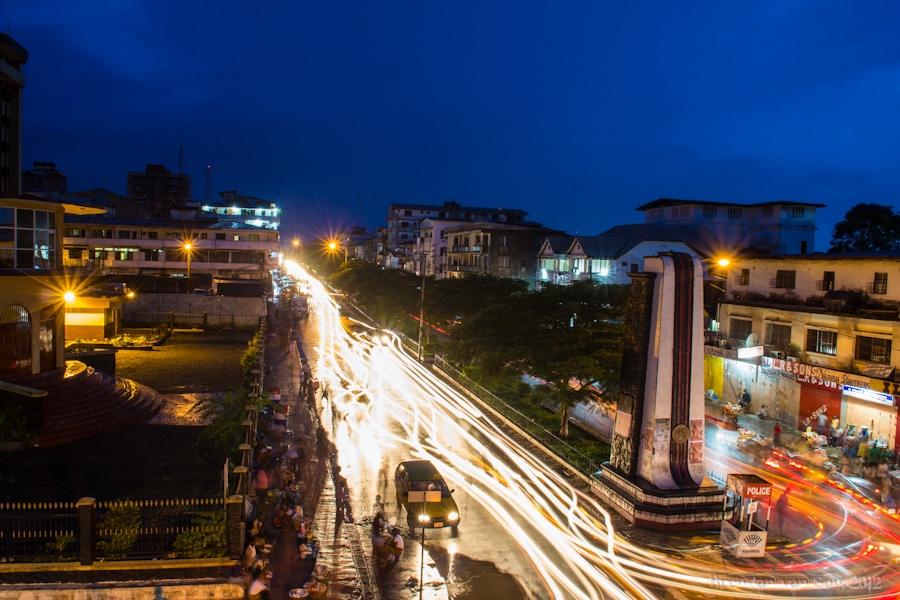 As sad as it was to leave Sierra Leone and move on, it’s equally as sad to leave the content behind as well.  But as the saying goes, the traveller must travel and his writing must follow.

Anyways, I didn’t spend nearly as much time in Liberia as I had hoped or planned.  I ended up in Liberia in the heart of the rainy season and most of the roads were impassable making certain destinations like Sapo National Park and Harper which I really wanted to visit inaccessible to me.  My time in Liberia ended up being a complete anomaly from the rest of West Africa.  I stayed put in a fancy hotel with good internet for about a week before moving on.  I took this week’s photo from my perch above the main street in Monrovia at a great hotel called The Palm Hotel.

I love this image because I feel like it shows the chaos of West African streets.  Most photos I’ve taken of roads at night provide perfectly straight light trails as cars drive in a direct line.  These light trails zigzag all over the place as cars go, well, wherever they fit.

If you don’t know how I got this shot than you have some reading to do.  One of the books that I both love and hate is Scott Kelby’s Digital Photography book.  I love it because it is a simple approach that basically explains how to do certain things with a digital camera.  Basically, if you want to learn how to make light trails from cars, or turn the street lights into stars it goes over it in a really simple manner.  I hate the book because as great as Scott Kelby is at explaining things in simple terms, his humour and writing style causes me to cringe at least once a page.  Regardless, if you look past his attempts at humour, you’ll get a lot out of that book and the others in his series.  To put things simply, this was shot at a long exposure (30 seconds) and a narrow aperture (f/11) during the photography “blue hour”.  On another note, I am in the process of writing another photography book myself it should be ready in a month… I promise it will be humour free.