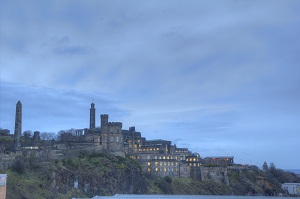 The very first thing I noticed in Edinburgh was its bridges.  Yes, you know you’re a photographer when you begin to overlook the fact that you’re surrounded by castles and brilliant architecture for good shooting spots.  However, getting out and taking pictures like this one, I feel, gets me in touch with the city.  I generally spend a lot of time waiting for the right light, wandering back streets to take pictures from, and asking people for directions.  In the end, I think I end up exploring much more of a particular destination as a result.  In just 4 days in Edinburgh I am positive that I managed to wander nearly every single street in town.

As if I hadn’t done enough wandering, on my last night in town I went out to the pub with some guys I met on my Southern US roadtrip and drank far too much.  I ended up having my polar fleece nicked at the last pub, and decided to walk home jacket-less.  The only problem was that I walked about an hour in the wrong direction.  Once I had finally got myself adjusted I remember crossing this bridge as the sun was about to come out and thinking, “I wish I had my camera, I’d take a picture.” Yeah, as if I’d be able to focus it.

Luckily, I had been there the day before and grabbed this shot with a much sharper sober eye.

As I eluded to in the intro, it’s all about vantage points.  You want to get yourself eye-level or higher than your subjects when shooting cities like this.  Look for bridges, hillside parks, and even rooftops if you can find them.  Next time you are photographing an urban landscape like this stop and look around and always try to get higher. Also, as you probably know, you’ll need a tripod for a long exposure photo like this one, or at the very least something to stabilize your camera on.

For the photo nerds, this image was actually one photo which I developed both over exposed by 1 and a half stops and under exposed 1 and half stops.  I think placed one image on top of the other and used a gradiant to make the two photos meld into one properly exposed image.  If you want to know how to do this there are lots of good tutorials on youtube.