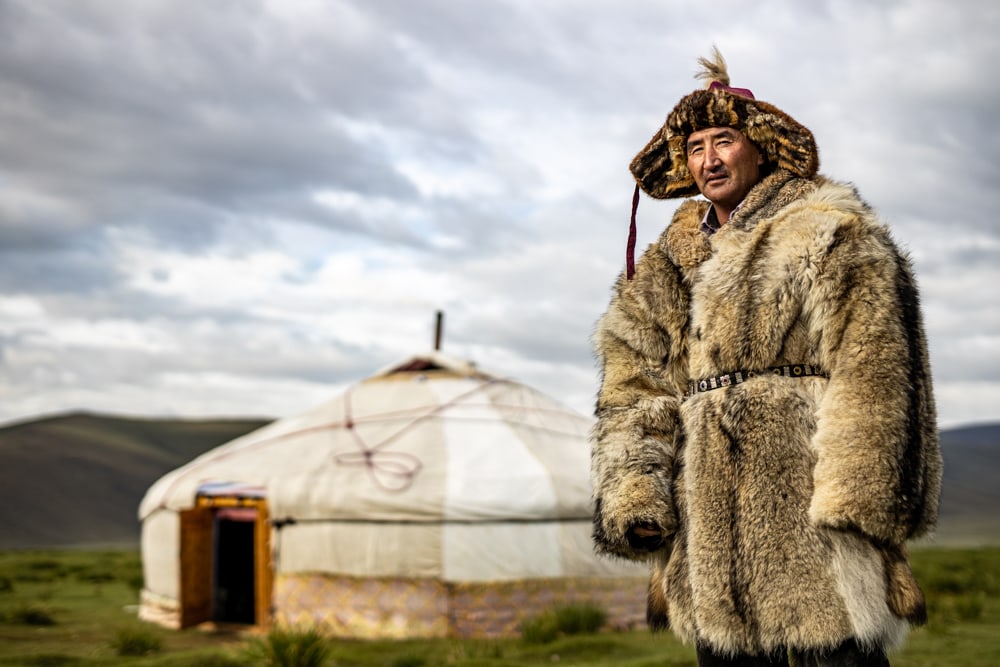 After not visiting the west of the country on my first trip to Mongolia some 5 years ago, heading to the Altai regions was top of my list for the return this year.  One of the big reasons I wanted to head west was to photograph the Eagle Hunters – most of whom are Kazakh decent – in that area.  So, when we arrived west with this year’s Mongolia photography tour, I was stoked that this was our first stop.  I was even more thrilled to find out that we’d actually have the chance to photograph perhaps the most famous eagle hunter in Mongolia.

Honestly, I didn’t know exactly what was happening on this trip.  I put a lot of the logistics into the hands of my friends and local operators in Mongolia.  They didn’t disappoint.

In fact, it was a pretty funny situation.

Our guide told us that we were going to pick up the eagle hunter in Ulgii and head to her families’ nomadic camp.  One of the participants started asking if our guide had heard about the documentary about “The Eagle Huntress”.  And our guide was like,

Aisholpan and The Eagle Hunters

There was another funny moment as we rolled into the area where Aisholpan’s family stayed.  She had been away at school.  And since her parents are nomadic in the summer, we couldn’t find them.  She didn’t know where her house was – as it’s always moving.  But, eventually we found them and they welcomed us in.

Since it was already fairly late in the evening, we just headed out to do a quick star photography session, and then crashed.

Most Kazakh nomads traditionally sleep directly on the floor.  So that’s exactly what we did. 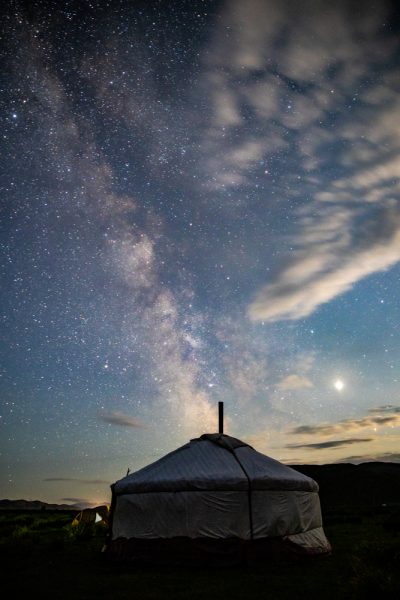 I woke up after a pretty restless sleep on uneven ground with dogs barking all night to just a phenomenal sky.  I mean, it was the type of sky landscape photographers dream of capturing.  The only problem was that we weren’t exactly somewhere that lends well to wide angle imagery, and skies like that really need a wide angle to accentuate them.

When you use a long lens, the sky flattens. It makes the landscapes look bigger, but it kills a lot of the sky.

So, with this Mongolian landscape you almost need to use a telephoto lens like the Canon 100-400mm to really make it stand out.  But, that would have made the sky look so much less impressive.

I kind of just rolled with it. 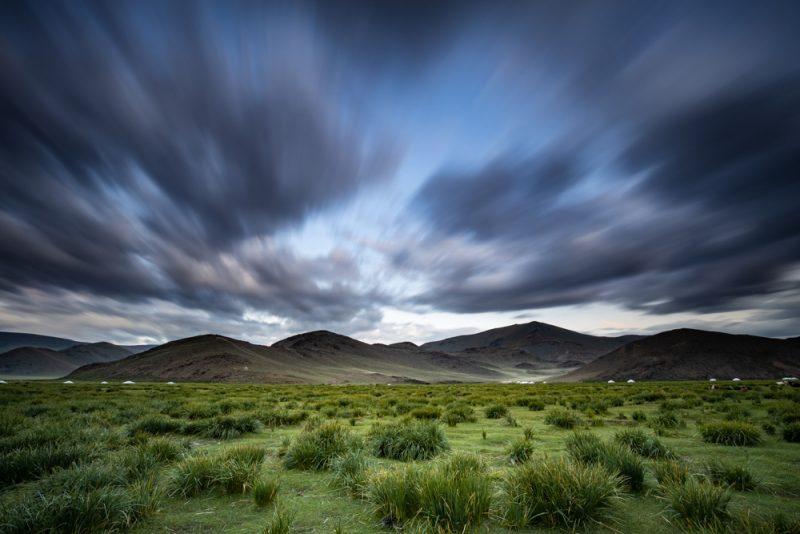 Obviously, I was blown away by the sky in the morning.  But, the images just couldn’t possibly show how incredible a scene it was.  So, I was little bit disappointed I couldn’t come up with something more dramatic.  But as I walked away I spotted Aisholpan’s mother heading out with a bucket to milk their cows.

I grabbed my Sigma 50mm f/1.4 lens and headed over to see if she was OK with me photographing her on her morning chores.  She was.

The light was so perfect and soft that it really made for a beautiful image.  I’m a huge fan of the Sigma 50mm f/1.4 but I really don’t get the chance to use it all that often.  But the way the colour and contrast came through the glass here made me never want to take the lens off again. 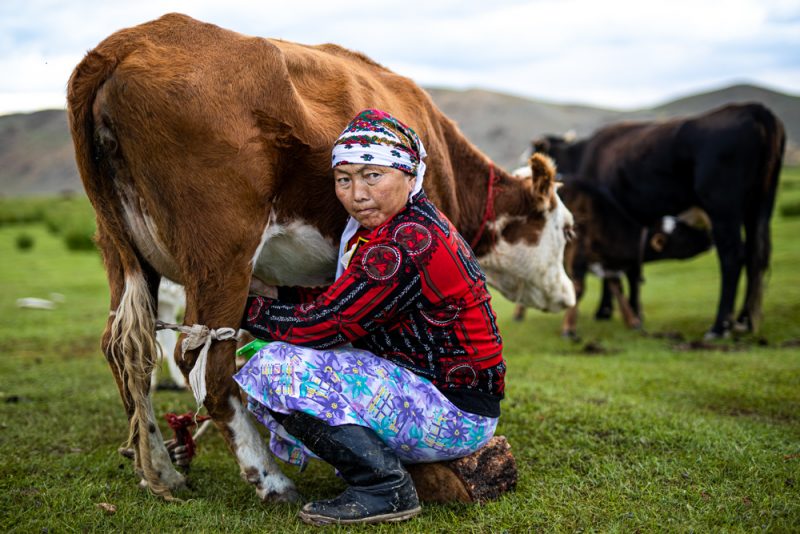 Aisholplan and her father were fantastic.

They offered to get dressed up in their winter clothing to pose for some travel portraits for our group.  Obviously, my group was trilled.  And they make such beautiful models. They’re also much more comfortable in front of the camera than other Mongolians are.  I guess being a part of a huge documentary will do that.

I’m going to start with some images of Aisholpan first.  Although, to be honest, I really didn’t photograph her that much as most of my group’s focus was on her, and I didn’t want to get in their way.

A Girl and Her Eagle

In fact, looking through my images of the visit to photograph the eagle hunters, I really only have one photo of Aisholpan that I love.

It’s a very subtle, flat profile image.  But, there’s so much raw power to her look in this photo that I love.  She looks courageous – and she is.  Aisholpan in person is actually a very funny, outgoing person.  And that side of her personality comes out on camera most of the time. She’s smiley. But, in a portrait of an eagle hunter, you almost want the tough side. 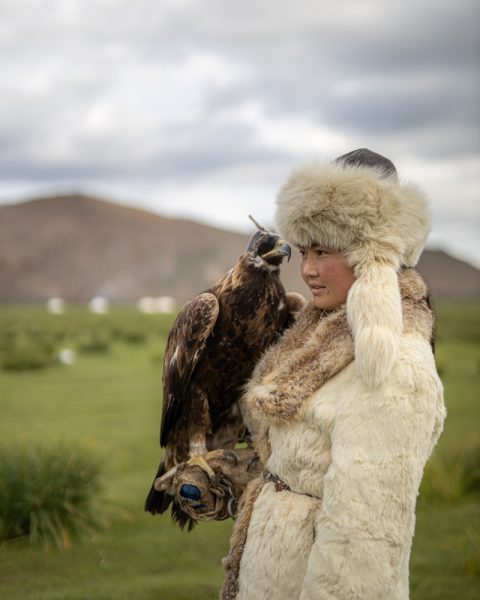 Aisholpan’s father is Nurgaiv.  Until he put on his wolf-skin jacket and hat, I wouldn’t have taken him for an eagle hunter in public. He looks very “normal”.  But as soon as that traditional winter attire went on, he was the eagle hunter.

As I mentioned, my group was pretty focused on Aisholpan – I mean, she is the celebrity – so I turned my attention to her father.

I’m glad I did, too.  I made 2 portraits of him that might be my favourites of all-time.

A Man and His Ger

I love an environmental portrait.

I think there’s just so much more power to putting the person in their environment.  So, with this famed Mongolian eagle hunter, that’s what I wanted to do here.

Luckily for me, some really beautiful soft light came bouncing over the horizon and through the clouds.  It wasn’t harsh enough to burn colours out, but it was bright enough to separate Nurgaiv from the background.  It also made him squint a little bit, which gave him a really tough look. 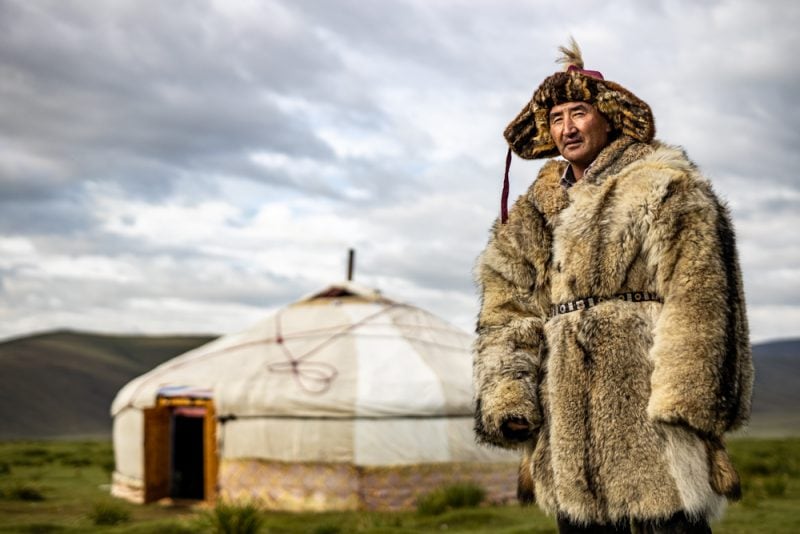 Portrait of an Eagle Hunter

With the light as beautiful as it was, I also wanted to capture just a simple portrait of Nurgaiv.

One of the things I’ve been focusing a lot in my imagery lately is simplicity.  Early in my career I always tried to do too much with the photos.  I tried to include too many people and items.  So, I’m trying my best to look through my compositions and then think to myself, “what could I remove?”.

On this portrait the answer was, “basically everything.” 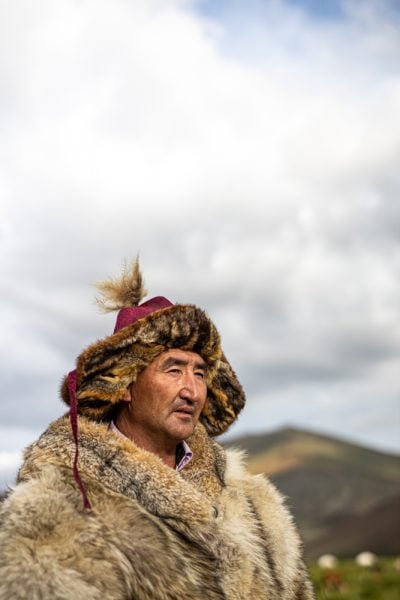 With portraits, if you shoot from eye-level you get a very normal presence from the subject. If you photograph from above eye-level it gives them a weak presence.  If you get low and photograph them from below their eye-level it can give their presence all sorts of power – which is what I tried to do here.

One of the hardest things about making images of people in action, is creating movement.  So, when Nurgaiv got up on his horse with the eagle on his arm my first thought was, “how can I create movement?”.

The answer was panning the camera on a slower shutter speed.  I dropped the shutter speed down to 1/30 seconds and panned as he raced along in front of the camera.  On the 100-400mm that 1/30 shutter speed was slow enough to show the movement in the grass while still being fast enough to get a sharp image of Nurgaiv and the eagle. 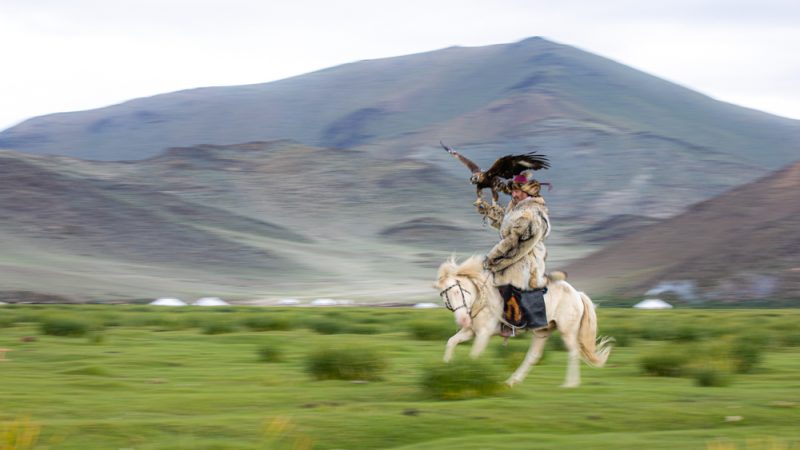 Yes, there’s lots more coming from Mongolia.  I have at least 5 more videos coming from this trip, and I’m going to try to whip together at least one location guide blog post here as well.

I should also mention that there is likely going to be a video and photo tour to Mongolia in 2020, so be sure to sign up for news.